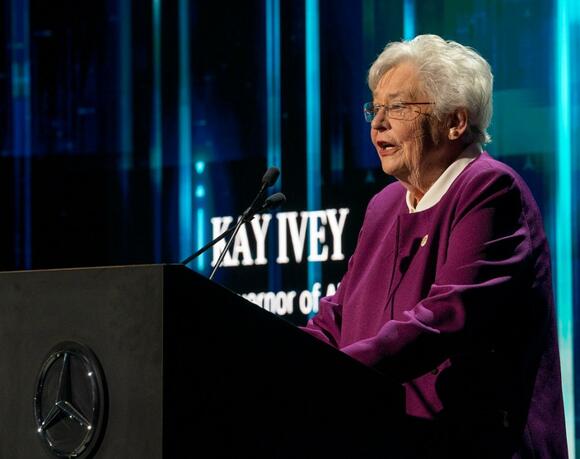 ALABAMA ( WRBL ) – Rumors about the health of Alabama Governor Kay Ivey have been circulating on social media, with posts claiming she is ill.

The rumors have suggested that Ivey’s cancer has returned. In September 2019, Ivey was diagnosed with Stage 1 lung cancer. She underwent radiation treatment for a small malignancy on her lung and was later found to be cancer-free in January 2020.

Ivey’s office is now addressing the recent rumors, saying Ivey remains cancer-free. A release from Ivey’s Director of Communications, Gina Maiola said rumors about her health are “bogus” and the governor is “doing great” and looking forward to serving the state of Alabama for years to come.

The following release from Maiola was sent out on August 11, 2022:

“When it’s a slow news day in the summer, rumors run rampant in the Capital City. While I did not want to give any credibility to these bogus rumors, I do want to be sure to clear the air and set the record straight. Governor Ivey is doing great, and she continues to thank the Good Lord for keeping her healthy and cancer-free. We look forward to her leading the state of Alabama for years to come.” – Gina Maiola, Governor Ivey’s Communications Director

I do wish Kay Ivey well. But, we do not need our taxes raised again like last time regarding the gas tax. We need our taxes cut. Inflation is still high and families are struggling to get by financially.

I do not look forward to Kay Ivey "serving" the people of Alabama for years to come and I know I'm not alone. She needs to retire so she can stay healthy, if she really is.

MONTGOMERY, Ala. (WRBL)- A group of renowned civil rights attorneys are now representing an Alabama inmate after pictures showing him emaciated and barely able to sit up went viral on social media.  The disturbing images of Kastellio Vaughan sparked outrage, sorrow, and allegations of abuse and neglect inside Alabama‘s Elmore Correctional Facility. Now, Civil Rights […]
1 DAY AGO
WRBL News 3

Alabama called off the execution of Alan Miller after difficulty accessing the inmate's veins.
ALABAMA STATE・2 DAYS AGO
WRBL News 3

(GEORGIA) -The Georgia Coroner’s Association is holding its annual meeting in Macon this week. Muscogee County Coroner Buddy Bryan is one of many coroners from across the state in attendance. The event is also being attended by local and state leaders, along with representatives from law enforcement agencies. Georgia Governor Bryan Kemp was a guest […]
MUSCOGEE COUNTY, GA・2 DAYS AGO
WRBL News 3

MONTGOMERY, Ala. (WIAT) — Gov. Kay Ivey and other state leaders are welcoming the shift to electric vehicles in Alabama as a plus for the economy. Lawmakers are grappling with how to make up for lost gas tax revenue if, and some say when, EVs become dominant on the roads. Right now, Alabama collects about […]
ALABAMA STATE・2 DAYS AGO

More Georgia voters said they were likely to vote for Gov. Brian Kemp (R) than his Democratic challenger Stacey Abrams less than two months out from Election Day, according to a new poll. About 49 percent of Georgians said they definitely or probably would vote for Kemp, compared to 45 percent of voters who said […]
GEORGIA STATE・3 DAYS AGO
WRBL News 3

MOBILE, Ala. (WKRG) — Victory for a Mobile County woman who led the charge to create an “elder abuse registry” in the state of Alabama. “Shirley’s Law” requires the state to keep a database of people convicted of abusing vulnerable adults so nursing homes and families can check a caregiver’s background. “Shirley’s Law” was created after […]
MOBILE COUNTY, AL・3 DAYS AGO
WRBL News 3

State officials urge Alabamians to have a hurricane preparedness plan

MONTGOMERY, Ala. (WIAT) — The Atlantic Ocean is becoming more active, and state emergency management officials are urging Alabamians to be prepared in case one of those systems heads our way. It’s been two years since Hurricane Sally and 18 since Ivan hit the Gulf Coast. Orange Beach City Administrator Ken Grimes has seen it […]
ALABAMA STATE・4 DAYS AGO
WRBL News 3

MONTGOMERY, Ala. (WIAT) — State troopers this week are spending time near train crossings across the state to talk to drivers about the importance of safety on the tracks. Alabama had the 7th highest number of train crossing collisions last year at 85, according to the Federal Railroad Administration. Operation Clear Track aims to change […]
ALABAMA STATE・3 DAYS AGO
WRBL News 3

ENTERPRISE, Ala. (WDHN) — The Alabama Department of Education announced partnerships with some 33 school districts in the state. Several are located in the Wiregrass. Enterprise City School Superintendent, Dr. Zel Thomas, along with his administrative staff and state officials held a news conference on becoming what is called a “multi-tier system of supports” school […]
ENTERPRISE, AL・4 DAYS AGO
WRBL News 3

Quiet to start the week, but becoming active as we track Ian

COLUMBUS, Ga. (WRBL) — A few leftover clouds to start your Monday as temperatures will be a little more seasonable in the mid 60s with afternoon highs climbing back into the mid to upper 80s. Staying dry through midweek until we focus on Tropical Storm Ian (likely Hurricane Ian.) Ian will likely make landfall in […]
FLORIDA STATE・13 HOURS AGO
WRBL News 3

‘This building is amazing’: Alabama School of Cyber Technology and Engineering welcomes students to new campus

It's a new beginning for students at the Alabama School of Cyber Technology and Engineering.
ALABAMA STATE・2 DAYS AGO

Virginia Sen. Tim Kaine (D) announced Wednesday that he will vote against Sen. Joe Manchin’s (D-W.Va.) permitting reform legislation, dealing a blow to plans to add it to a must-pass spending bill. Kaine said he would not vote for it because it would approve 100 miles of the Mountain Valley Pipeline running through his home […]
VIRGINIA STATE・4 DAYS AGO
WRBL News 3

A wanted woman has been arrested in Louisiana on Thursday following the death of a man in Union County.
UNION COUNTY, SC・3 DAYS AGO
WRBL News 3

BILOXI, Miss. (WKRG) – Over 170 people were arrested and thousands of drug doses seized on the Mississippi Gulf Coast in a summer-long special investigation. The Mobile Enforcement Team (MET) was announced by Governor Tate Reeves on May 11. It sent a wave of state and federal law enforcement personnel and resources into Hancock, Harrison […]
3 DAYS AGO
WRBL News 3

How common are mountain lion sightings in Alabama?

Pumas, panthers, and... catamounts? No matter what you call a mountain lion, they've been spotted here in Alabama — just not as often as you might believe.
ALABAMA STATE・4 DAYS AGO

Two Alabama veterans who were held captive in Ukraine after volunteering to help fight are back in the United States.
ALABAMA STATE・2 DAYS AGO
WRBL News 3

Hunter safety course a good idea for all firearms hunters

JOPLIN, Mo. – Now that prime hunting season is underway in Missouri, the Missouri Department of Conservation (MDC) is urging all hunters, especially those who use firearms, to take state’s official Hunter Safety Course. The course, which can be taken online though the Missouri Department of Conservation’s website, is a required course for firearms hunters […]
MISSOURI STATE・3 DAYS AGO
WRBL News 3