West Virginia jails under a state of emergency 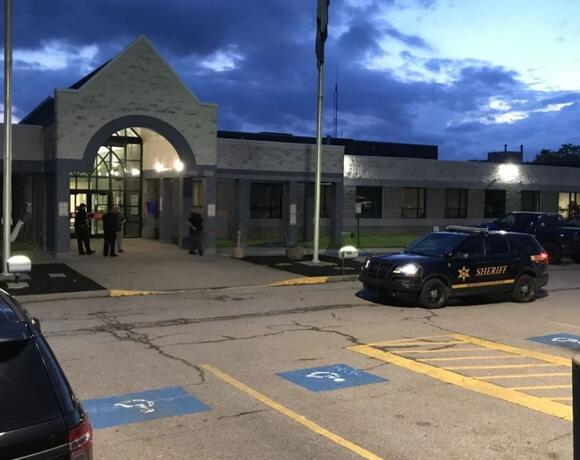 WEST VIRGINIA- West Virginia Governor Jim Justice announced on Thursday during a media briefing that the jails in the Mountain State are under a state of emergency.

The Governor said the state of emergency is because of critical staffing issues and that there is a shortage of employees in the jail system.

Gov. Justice says this will allow the National Guard to come into the jail system to bridge the gap until the jail system can get more employees. The Governor said he didn’t know how many Guard members would be needed at this time.

The Governor said he directed representatives from the West Virginia Department of Homeland Security (HLS) and Division of Corrections and Rehabilitation (DCR) to engage with a bipartisan group of legislators to sponsor a bill that would have afforded a $10,000 locality pay adjustment for Correctional Officers across the state where locality pay is necessary for maintaining critical missions of safety and security and to preserve the DCR’s ability to recruit and competitively retain employees.

That bill was stalled in the House of Delegates, and despite being voted out of the House Finance Committee, the full House never got the opportunity to vote on the bill.

Gov. Justice said we could end up in a bad situation if we don’t get ‘this resolved.’

This is a breaking news story; refresh this story for updates.

Pay a bit better & some of us may just think about it… I live not far from Huttonsville & know a large majority of employees there. Not many have good things to say of the place.

Well maybe someone should tell the Billionaire governor of West Virginia that they should pay people more than barely minimum wage to want to be prison guards.

"higher average cost of living in West Virginia..." than WHERE? i agree that salary is low, but it's low because the politicians are cheapskates! the alternative is easy - start using inmates as road material, bring back public hanging, etc. costs for carrying convicts is too high already.

WHEELING, W.Va. (WTRF) — In 7News’s exclusive interview with Governor Jim Justice this week, he spoke about his belief that politics is best controlled locally. That was one of the reasons he gave for his opposition to Amendment 2, which would allow the legislature to control more than one-fourth of property taxes. The governor stressed […]
POLITICS・1 HOUR AGO
WTRF- 7News

WHEELING, W.Va. (WTRF) – Although Governor Jim Justice was in Wheeling on Friday to break ground for the Streetscape Project, 7News decided to ask about another piece of positive news that could be coming to West Virginia. The Mountain State recently submitted a bid to host the 2024 Olympic Diving Trials. They would be held […]
MORGANTOWN, WV・2 DAYS AGO
WTRF- 7News

WHEELING, W.Va. (WTRF) – Governor Jim Justice continues his push to reduce West Virginia’s personal income tax by 10%. He was in Wheeling on Friday to discuss it with the public in Centre Market, and then visited 7News for an exclusive interview on the topic. All the states that have no income tax, the population […]
WHEELING, WV・2 DAYS AGO
WTRF- 7News

WHEELING, W.Va. (WTRF) – While West Virginia Governor Jim Justice was in Wheeling on Friday to break ground for the Streetscape Project, he also met with people in Center Market to discuss Amendment 2. That Amendment proposes that 27% of West Virginia’s personal property taxes would be controlled by the state legislature. That would allow […]
WHEELING, WV・2 DAYS AGO

Gov. Jim Justice will make two stops in Wheeling Friday. Gov. Justice will be at the Groundbreaking Ceremony for the Wheeling Streetscape Project The approximately $32 million project is a partnership between the WVDOT and the City of Wheeling that will upgrade West Virginia Route 2 on both Main Street and Market Street in the […]
WHEELING, WV・3 DAYS AGO
WTRF- 7News

FAYETTEVILLE, WV (WVNS) — A Georgia man is facing felony charges in Fayette County. On September 22, 2022, 44-year-old Clinton Whitehead of Georgia was brought to a temporary holding cell after being sentenced to 1 to 5 years in prison in the Circuit Court of Fayette County for the offense of Possession with Intent to […]
FAYETTE COUNTY, WV・2 DAYS AGO
WTRF- 7News

WEST VIRGINIA (WTRF) — The new West Virginia Ground Beef program hopes to keep food local in the Mountain State and make it more affordable for consumers, according to Farm and Dairy. The program is a brand partnership between Buzz Food Service and the West Virginia Cattlemen’s Association. Previously, much of West Virginia’s cull cows […]
AGRICULTURE・2 DAYS AGO
WTRF- 7News

Felony murder charges could follow distribution of fentanyl that results in death.
TEXAS STATE・3 DAYS AGO

West Virginia wildlife officials have embarked on an effort to restore the northern bobwhite quail population. Gov. Jim Justice announced Wednesday that 12,000 bobwhite quail have been added at wildlife management areas across the state. The goal is to bring the numbers to 20,000, and the Division of Natural Resources will conduct more stockings through […]
SCIENCE・3 DAYS AGO
WTRF- 7News

Almost a half million Pennsylvanians could qualify for food stamps

HARRISBURG, Pa. (WTRF) — More than 420,000 Pennsylvania residents may qualify for food stamps beginning October 1 after state lawmakers raised the income threshold for food stamps to 200 percent of the Federal Poverty Income Guidelines, according to our affiliate KDKA. Army tells soldiers, hit by inflation, to sign up for food stamps Every October, […]
PENNSYLVANIA STATE・3 DAYS AGO
WTRF- 7News

Here are the high school football scores in the Ohio Valley of West Virginia and Ohio.
OHIO STATE・2 DAYS AGO
WTRF- 7News

Walmart jobs in West Virginia and Ohio: Company plans to hire 40K associates for the holidays

WASHINGTON (AP) — Campaigning for Congress in northwestern Ohio, Republican J.R. Majewski presents himself as an Air Force combat veteran who deployed to Afghanistan after the 9/11 terrorist attacks. Military records tell a different story. They indicate he never deployed to Afghanistan but instead completed a six-month stint helping...
OHIO STATE・4 DAYS AGO
WTRF- 7News

WELLS TOWNSHIP, OHIO (WTRF) – The Wells Township Council held an emergency personnel meeting on Thursday night, leading to the immediate suspension of Police Chief John Ingram. This all stems from an incident earlier this month where an officer shot and killed a dog that had reportedly been behaving in a threatening manner toward residents. […]
OHIO STATE・3 DAYS AGO
WTRF- 7News

Man ran over ‘Republican’ teen who died after political argument

A man has been charged with vehicular homicide and leaving the scene of an accident after a political argument with a teenager. Fox News says a North Dakota man, Shannon Bandt, 41, hit a teen, 18-year-old Cayler Ellingson, with his vehicle because the teen was threatening him. Bandt allegedly claims the teen called some people, and […]
PUBLIC SAFETY・3 DAYS AGO
WTRF- 7News

An 11-year-old might be in timeout after he stole his grandparents’ car. The boy crashed the car into a pole near Broadhead Fording Road and Windgap Avenue, according to KDKA. No one was injured, and the news outlet says no one has been charged at this time. The news outlet also says the boy is […]
PENNSYLVANIA STATE・3 DAYS AGO