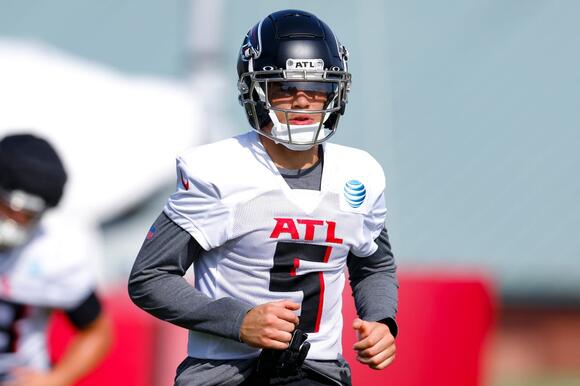 The pair are expected to be among the team's stars this season.

Part of the benefit Atlanta Falcons rookie wide receiver Drake London has is the opportunity to compete against one of the league's best cornerbacks every day in practice.

Third-year pro A.J. Terrell, the 16th overall pick in the 2020 NFL Draft, has already established himself as one of the league's best cornerbacks just two seasons into his career. And now he's looking to bestow some of his knowledge on how to improve rapidly upon the Falcons newest rookie.

"Just him trying to figure his way around, same rookie stuff," Terrell said. "But he's getting better each day, each week. Just me giving him a good look and competing, make sure he earns everything. And he's been doing a good job, earning the ball and running good routes to get open and just making plays."

Squarely in a transitional phase, the Falcons need foundational pieces. Terrell certainly fits the bill, and Atlanta is optimistic that London , the eighth overall pick in April's NFL Draft, can grow into one as well.

Stepping into the No. 1 receiver role as a rookie, London will face the opponents' top corner from the jump, and there's no better way for him to prepare for the challenge than facing Terrell in practice. The two went up against each other Wednesday, with Terrell getting the better of London, much like he has all camp.

While London lost this rep to Terrell, the rookie had an otherwise solid day. He's continuously flashed throughout camp, offering glimpses of why Atlanta took him in the top 10 of April's draft. Reps like the one against Terrell should prove to be invaluable for London as he navigates his first professional campaign.

The good news is that most of the cornerbacks London will face on Sundays won't be as good as Terrell.

The Atlanta Falcons have now run for over 200 yards twice in just four weeks after not surpassing the 150-yard mark in any game last season.
ATLANTA, GA・1 HOUR AGO
Miami Herald

The latest episode of The Greg Cote Show podcast, out now, comes at you like a battering ram, with a special guest who needs but a one word introduction, one syllable, even:
MIAMI, FL・17 MINUTES AGO
Falcon Report

Two game-winning interceptions in just as many weeks for the Atlanta Falcons defensive unit.
ATLANTA, GA・13 HOURS AGO

The Atlanta Falcons struck gold with the signing of running back Cordarrelle Patterson. From his on-field breakout to off-field presence, the veteran has transformed Atlanta's rushing attack - while staying true to himself.
ATLANTA, GA・1 DAY AGO
Falcon Report

Atlanta Falcons running back and special teams ace Avery Williams wasn't one of the most commonly talked about players in his draft class, but he was well-liked by at least one other team - the Cleveland Browns, who travels to Atlanta for a road matchup on Sunday.
ATLANTA, GA・23 HOURS AGO
Falcon Report

The Atlanta Falcons are preparing to play the Cleveland Browns Sunday. But they might be doing so without star running back Cordarrelle Patterson.
ATLANTA, GA・2 DAYS AGO
Falcon Report

Browns vs. Falcons Halftime Update: A Tale of Two Quarters in Atlanta

The Atlanta Falcons and Cleveland Browns are deadlocked through two quarters in Mercedes-Benz Stadium. Here's a rundown of all the action.
ATLANTA, GA・16 HOURS AGO

Despite having the NFL's best rushing attack, Atlanta Falcons coach Arthur Smith understands the Browns are not a one-dimensional offensive team.
ATLANTA, GA・1 DAY AGO