One dead after crash in Luzerne County 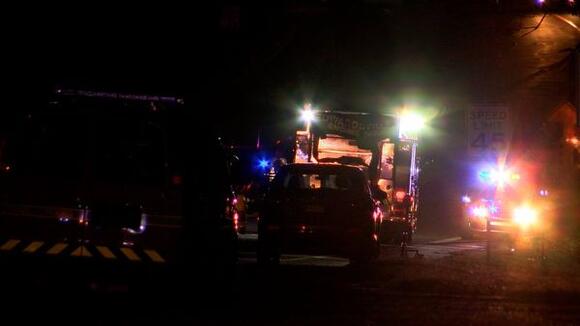 EDWARDSVILLE, LUZERNE COUNTY (WBRE/WYOU) — One person is dead after a crash that occurred early Thursday morning in Luzerne County.

The Luzerne County Coroner tells Eyewitness News that a 41-year-old man riding a bike died as a result of the crash.

Circumstances surrounding the incident have not been revealed at this time.

That section of Route 11 was closed while crews worked the scene and was reopened around 4 a.m.

SCRANTON, LACKAWANNA COUNTY (WBRE/WYOU) —Officials have identified the victim of Saturday night’s fire in Scranton as 64-year-old Gerard McGuire. First responders were called to a fire in the 1500 block of West Gibson Avenue Saturday night around 8:20 pm. When crews arrived, they were met with a “heavily involved” structure fire with reports of one […]
SCRANTON, PA・21 HOURS AGO
WBRE

One hospitalized after dump truck rollover

UPDATE: This article has been updated to reflect the correct fire department that responded to the crash. HUNLOCK TOWNSHIP, LUZERNE COUNTY (WBRE/WYOU) — A man was hospitalized in Luzerne County after the dump truck he was driving rolled over on Route 11 according to officials. Officials from the Mocanaqua Volunteer Fire Company # 1 tell […]
LUZERNE COUNTY, PA・1 DAY AGO
WBRE

POCONO TOWNSHIP, MONROE COUNTY (WBRE/WYOU)— A 35-year-old man was pronounced dead on Thursday after a roll-over crash on Interstate 80 in Monroe County. According to the Lehigh County Coroner, Kenneth Williams, 35 from Wilkes-Barre, was the driver of a car that went off of Interstate 80 west around 3:46 am and rolled over. Officials said […]
MONROE COUNTY, PA・2 DAYS AGO
WBRE

PLAINS TOWNSHIP, LUZERNE COUNTY (WBRE/WYOU) — One man is dead after being shot by state troopers after they say he tried to hit them with his truck while they responded to a disturbance call at Ole Tyme Charley’s in Plains Township early Friday morning. There was a heavy presence of state and local police on […]
PLAINS TOWNSHIP, PA・2 DAYS AGO

PLAINS TOWNSHIP, LUZERNE COUNTY (WBRE/WYOU) — Police activity has shut down a section of road early Friday morning in Luzerne County. While Plains Township Police and Pennsylvania State Police are refusing to give any information on the incident at this time, a section of South River Street around the area of Ole Tyme Charley’s Pub […]
LUZERNE COUNTY, PA・2 DAYS AGO
WBRE

Woman dies after being thrown off motorcycle

PALMYRA TOWNSHIP, PIKE COUNTY (WBRE/WYOU) — A Pike County 12-year-old was reported missing to state police on October 1. Officials say Kiana Simon, 12 years old from Palmyra Township, left her home in the 100 block of Tanglewood Drive in the Tanglewood Lakes Community sometime between 9:30 am and 10:00 am on October 1. Investigators […]
PIKE COUNTY, PA・1 DAY AGO
WBRE

HAZLETON, LUZERNE COUNTY (WBRE/WYOU) — Hazleton City Police Department report that they had recovered a stolen firearm and a ghost gun early Sunday morning. According to police, In the early morning hours of October 2, at approximately 2:16 a.m., Hazleton City Police were alerted of a male with a firearm in the area of East […]
HAZLETON, PA・1 HOUR AGO

LOYALSOCK TOWNSHIP, LYCOMING COUNTY (WBRE/WYOU) — Police arrested a man after they say he was found with explosive devices inside a home in Lycoming County. According to Pennsylvania State Police, on Thursday around 11:00 a.m. troopers responded to the 900 block of Cemetery Street, in Loyalsock Township for a warrant to be served to a man […]
LYCOMING COUNTY, PA・2 DAYS AGO
WBRE

JESSUP TOWNSHIP, SUSQUEHANNA COUNTY (WBRE/WYOU) — According to the Pennsylvania Department of Transportation (PennDOT), there will be a road closure on State Road 3029 starting Monday. PennDOT says the project is happening approximately one mile north of State Route 706 in Fairdale. PennDOT recommends the following detour: Head southeast on North Road toward Forest Lake […]
SUSQUEHANNA COUNTY, PA・2 DAYS AGO
WBRE

MILTON, NORTHUMBERLAND COUNTY (WBRE/WYOU) — Police arrested a man they say shot a person through the door of an apartment complex in Northumberland County. According to the Milton Borough Police Department, on Thursday around 10:45 p.m., officers responded to the 700 block of Mahoning Street at the Milton Village apartment complex for a report of “popping […]
NORTHUMBERLAND COUNTY, PA・2 DAYS AGO
WBRE

I-80 lane restriction for bridge repairs

PORTER TOWNSHIP, SCHUYLKILL COUNTY (WBRE/WYOU) — State police are investigating a church break-in that they say was caused by juveniles in Schuylkill County. According to Pennsylvania State Police, on September 17, around 3:40 p.m., troopers responded to a reported break-in at Muir Grace United Methodist Church in Porter Township. PSP states through further investigation it was […]
SCHUYLKILL COUNTY, PA・3 DAYS AGO
WBRE

SCRANTON, LACKAWANNA COUNTY (WBRE/WYOU) — A Lackawanna County judge, veteran, and member of the Eyewitness News team was honored Friday evening in a special way for his service to our community. Applause filled the Lackawanna County Courthouse as a portrait of Senior Judge Thomas J. Munley was unveiled in front of a large crowd in […]
LACKAWANNA COUNTY, PA・1 DAY AGO
WBRE

POTTSVILLE, SCHUYLKILL COUNTY (WBRE/WYOU) — Police say the search for a man last seen on September 22 continues. Officials say Lucas Dellamonica, 42, was reported missing on September 24, about two days after he was last seen. Dellamonica’s mother, Marybeth Reta, said her son lives on the 1500 block of Bunting Street, Pottsville. According to […]
POTTSVILLE, PA・3 DAYS AGO
WBRE

DEER LAKE BOROUGH, SCHUYLKILL COUNTY (WBRE/WYOU) — Police are charging a man after they say he allegedly pulled out a machete during a road rage incident. According to Pennsylvania State Police, on September 14, around 2:00 p.m., a road rage incident occurred on State Route 61 in Deer Lake Borough. PSP states one driver, later identified […]
SCHUYLKILL COUNTY, PA・3 DAYS AGO
WBRE

WILKES-BARRE, LUZERNE COUNTY (WBRE/WYOU) — Bikers are helping bring attention to a problem surrounding roughly one in 20 criminal cases. “When you go to jail wrongfully, you lose everything,” said Termaine Hicks. Hicks served nearly two decades for a wrongful conviction. The Philadelphia man was among dozens of people gathered Sunday outside the Luzerne County […]
LUZERNE COUNTY, PA・1 HOUR AGO
WBRE

CONYNGHAM BOROUGH, LUZERNE COUNTY (WBRE/WYOU) — There are new developments in a controversy centering on a rainbow-painted fence in Luzerne County. Officials say the fence violates a zoning ordinance and it must be repainted. But the owner of the fence believes it all has to do with his support for gay pride. Eyewitness News first told you […]
LUZERNE COUNTY, PA・3 DAYS AGO
WBRE

EYEWITNESS NEWS (WBRE/WYOU) — A New York District Attorney tells Eyewitness News 36 people have been charged and over $150,000 in cash and various other items related to drug trafficking have been seized in a tri-state operation called “Operation Final Blow.” According to Orange County DA David Hoovler, “Operation Final Blow” was a four-month-long investigation […]
PIKE COUNTY, PA・3 DAYS AGO
WBRE

Man accused of making threats to kill a woman

SCRANTON, LACKAWANNA COUNTY (WBRE/WYOU) — Scranton police arrested a man after they say he made multiple threats to kill a woman. According to the Scranton Police Department, on Thursday officers responded to the 1700 block of Farr Avenue for a report of a domestic argument. Police said a child called 911 claiming she was walking down […]
SCRANTON, PA・2 DAYS AGO