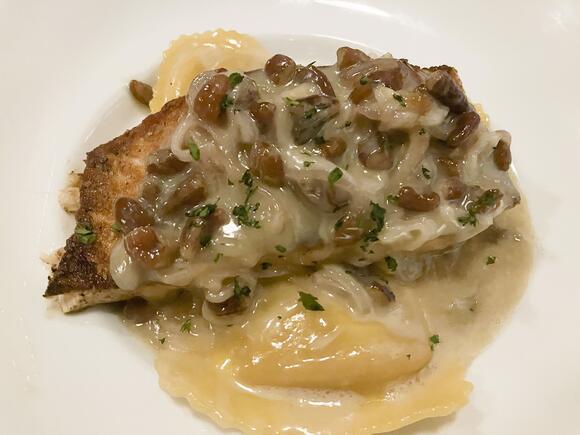 It struck me how often the word “perfect” was used during our dining experience at Mancy’s Bluewater Grille.

From the appetizer to the entree to the dessert to the server to the atmosphere, that word kept being repeated. And there’s no higher compliment than when an eatery aiming for the highest target continues hitting the bull’s-eye.

The jumbo shrimp cocktail with horseradish and cocktail sauce had crustaceans so ample in size that it could have been combined with a large salad to suffice as a filling dinner. The options are six ($24) and four ($16) shrimp.

The lobster bisque ($14) was perfectly balanced, with the sherry in a clam stock complementing the sweetness of the lobster. The fresh chives were a nice touch. Two in our group agreed that it was “by far” the most lobster they’d ever had in a bisque — probably equal to half of a lobster tail.

There were four “chef’s features” on the menu when we visited. The majority in our party opted for one of those: the Georges Bank Sea Scallops ($43) that were pricey but worth it. The pan-seared scallops were buttery, fresh, tender, and seared just right. The mushroom risotto and lightly charred asparagus served as superb accompaniments.

Georges Bank is a vast elevated area of the Atlantic Ocean’s floor between Massachusetts’ Cape Cod and Nova Scotia’s Cape Sable Island. The restaurant website noted that its seafood “arrives daily from the best fisheries in Boston and Honolulu” and is “caught and delivered within 24 hours, cut on-premises, and kept precisely at 33 degrees so your order’s always ocean fresh.”

The Key Lime Pie ($8) was top shelf, set off by a drizzling of caramel with a sweet and tart taste. Its high content of lime juice separated it from some lesser recipes that allow that taste to blend into the pie rather than dominate your tastebuds. The slices also were so large that two adults were satisfied with cutting it in half and sharing.

The generous portions were another menu item constant along with that high quality.

I chose the maple bourbon salmon ($35) upon a return visit, and was totally blown away by this dish. The Foley salmon served over four butternut squash ravioli with toasted pecans all swirled in maple bourbon cream was so sweet and tasty that it seemed like a dessert.

The moist, tender fish was farm-raised, and my server informed me that it is the lone remaining menu item from when Mancy’s Bluewater Grille opened in 2005. How about that for a dinner selection endorsement?

The servers on both trips to the restaurant less than a half-mile from a U.S. 23 exit were part of making the experiences special. They were helpful, friendly, funny, and seemed genuinely excited to answer our questions. They checked on menu ingredients with the chef and had well-timed visits to check on our needs.

The Foley family of Boston has been supplying the best Atlantic seafood for four generations, while the Mancy family has been providing five-star dining in the Toledo area for three generations. Those century-plus connections provide diners not only tried-and-true recipes but family pride that assures high standards.

Restaurant founder Gus Mancy, born and raised on the Greek isle of Crete, arrived in Toledo in 1916 and, according to the restaurant’s website, brought “with him the tradition of cooking with only the freshest and best ingredients.”

Perfection doesn’t come without such long-time dedication to attaining it.