Mom says teacher locked her son in restroom at school 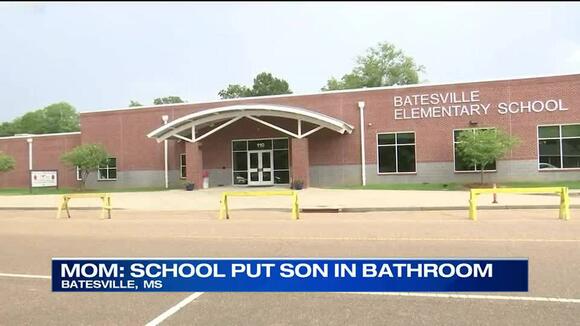 BATESVILLE, Miss. — A Mid-South mother asked for help after she claimed her 4-year-old son was locked inside a school restroom for bad behavior. Tonetta McClain told FOX13 that her son is a Pre-K student at Batesville Elementary School. She said the alleged incident happened Friday, August 5th.

“My concern right now is my baby is afraid to go to school,” McClain said.

McClain said her son, who we will not name, cries each morning before going to school due to the alleged incident.

“My son did say he goes in the bathroom; she holds the door and he said she cut the light off on him,” McClain said.

McClain said that her son has attention-deficit hyperactivity disorder (ADHD) and autism. He was allegedly locked inside the restroom and accused of acting out in class.

“I had called to the principal and asked her, and she did admit it, saying that they put him in the bathroom, and I was like that’s not a way to discipline a child like that,” McClain said.

FOX13 reached out to the South Panola School District. In a brief statement, the district released the following:

However, McClain shared text messages she alleges are between her and her son’s teacher. In the messages, McClain asked about the 4-year-old being locked in the restroom. She even admits that her son has a behavioral issue.

The alleged response from the teacher reads that the child “is going to have to stop hitting and kicking his teachers.”

The text continues, “I hope you talked to Dr. Sutton and your child will not be asked to go to the bathroom when he is upset. I will walk him down the hallway or outside if he doesn’t flail and pull from me.” For clarity, Dr. Sutton is the school’s principal.

McClain also shared a video of her son appearing to share the story of the alleged incident that occurred between himself and his teacher.

“Why is he going to the bathroom anyway while he upset,” asked McClain. “I thought they were supposed to at least go give him timeout like in the corner or something like that, not in the bathroom.”

Hire a lawyer. To treat any child like that is a disgrace but especially a child with ADHD and autism!!! The teacher should be fired immediately! And principal! This is NOT acceptable forms of discipline.

this is why I homeschool teacher's can not handle our babies with special needs. my son got kicked out at 4 years old. he has Autism,SPD, adhd combined and anxiety. you can not punish and or treat them like a normal child that don't work.

MEMPHIS, Tenn. — The executive director of the Memphis Museum of Science and History, Kevin Thompson, is responding for the first time since he chose to cancel a drag performance that celebrated the close of an LGTBQ+ exhibit. “We had armed folks here with, you know, high-powered rifles. That...
MEMPHIS, TN・19 HOURS AGO
FOX 13 Memphis WHBQ

MARKS, Miss. — At least four people have been shot, but the number could increase to seven, according to the Quitman County Sheriff’s Office. The shooting happened at approximately 12 AM, on First Street and MLK Junior Drive in Marks, Miss. There was a tailgating party following the...
MARKS, MS・6 HOURS AGO
FOX 13 Memphis WHBQ

MEMPHIS, Tenn. — A woman was arrested after an altercation at a local hookah lounge. On Sept. 19, a woman reported she had been assaulted inside the Spades Hookah Lounge at 3705 Malco Way, Ste. 105, according to the Memphis Police Department (MPD). The woman said she was in...
MEMPHIS, TN・1 DAY AGO
FOX 13 Memphis WHBQ

Collierville Police Chief speaks on officer who was run over

COLLIERVILLE, Tenn. — An officer with the Collierville Police Department remains in critical condition after a man wanted for attempted murder allegedly ran over him. Collierville Police Chief Dale Lane said the injured officer is a veteran of the department. Lane described his condition as critical but stable, adding that although he has been through several surgeries and is improving, he still has a long way to go.
COLLIERVILLE, TN・1 DAY AGO

MEMPHIS, Tenn. — Memphis Police is asking for the public’s help with information on two men who walked into Kohl’s and left without paying. On Sep. 28, two men walked into the Kohl’s on Germantown Parkway, in Cordova. The two stole $800 worth of clothing, then...
MEMPHIS, TN・4 HOURS AGO
FOX 13 Memphis WHBQ

Woman indicted after toddler dies from being left in hot car

MEMPHIS, Tenn. — A woman has been indicted on two charges after allegedly leaving a one-year-old boy inside a hot car in May. Fay Eschoe, 62, has been indicted on charges of criminally negligent homicide and aggravated child abuse of a child under the age of 8. The incident...
MEMPHIS, TN・3 DAYS AGO
FOX 13 Memphis WHBQ

Daycare owner indicted in death of 1-year-old boy who died after being left in hot van, DA says

MEMPHIS, Tenn. — Two suspects are on the run after allegedly stealing money from a local restaurant. On Sept. 17, officers with the Memphis Police Department (MPD) responded to a robbery at a Piccadilly at 4996 Stage Rd. An employee said she was at the cash register counting money,...
MEMPHIS, TN・1 DAY AGO
FOX 13 Memphis WHBQ

Eliza Fletcher’s cause of death revealed

MEMPHIS, Tenn. — A newly released autopsy describes how Memphis mother and teacher Eliza Fletcher was killed. According to the autopsy report, the 34-year-old Fletcher died of a gunshot wound and blunt force injuries to the head. She was shot in the back of the head from an intermediate...
MEMPHIS, TN・1 DAY AGO
FOX 13 Memphis WHBQ

MEMPHIS, Tenn. — Shelby Farms Park will transform for the weekend into a race course for the second annual St Jude Ironman. A group of three fathers whose children were treated at St. Jude are among the athletes competing in the event. “I mean, you get there and you...
MEMPHIS, TN・19 HOURS AGO
FOX 13 Memphis WHBQ

MEMPHIS, Tenn. — Editor’s Note: Memphis Police originally said that a child was shot, along with the man. Police later issued a correction, saying only the man was shot. This story has been updated to reflect that correction. One person was seriously injured after a shooting in Whitehaven...
MEMPHIS, TN・1 DAY AGO

MEMPHIS, Tenn. — A man is behind bars after allegedly cashing nearly $100K in checks he stole from someone’s home. On June 17, a man reported his home in the 9800 block of Humphrey Road was burglarized during the past week. Various items were taken from the home,...
MEMPHIS, TN・1 DAY AGO
FOX 13 Memphis WHBQ

DESOTO COUNTY, Miss. — A woman who ran over a former DeSoto County deputy while he was changing a tire on the side of the interstate has been convicted for the crash which left him permanently injured. Katherine Harris, 37, was drunk as she drove down I-269 on February...
DESOTO COUNTY, MS・2 DAYS AGO
FOX 13 Memphis WHBQ

MEMPHIS, Tenn. — For a teenager, that senior year of high school is one of the best. Prom, graduation, senior pictures, but for one Memphis teen, every day is a struggle. 17-year-old M’Leia Allen was struck by a car back in July and has been in the hospital ever since.
MEMPHIS, TN・2 DAYS AGO
FOX 13 Memphis WHBQ

MEMPHIS, Tenn. — Vacant lots have been plaguing Memphis neighborhoods and creating blight for years. In South Memphis, residents have had enough. Now they’re hoping to spark change within the community. FOX13′s Cierra Jordan spoke with a resident trying to clean up their neighborhood. “We have these...
MEMPHIS, TN・21 HOURS AGO
FOX 13 Memphis WHBQ

MEMPHIS, Tenn. — A man was arrested for firing several rifle shots, killing a woman on a balcony, and hitting several apartments. On Sep. 26 at approximately 6:05 PM, the Memphis Police Department (MPD) responded to a fight at the Creekside Meadows Apartment complex, near the Memphis airport. When...
MEMPHIS, TN・1 DAY AGO
FOX 13 Memphis WHBQ

MEMPHIS, Tenn. — Bullets flew outside of a liquor store Thursday evening, leaving a man in the hospital seriously injured, according to Memphis Police. Police said the gunfire happened on Summer Avenue near Tee Jay’s Liquor around 7:30 p.m. One man was found critically injured and rushed to...
MEMPHIS, TN・1 DAY AGO
FOX 13 Memphis WHBQ

MEMPHIS, Tenn. — One person was found dead in a burning car in Millington. On Thursday, at 8:30 a.m., Shelby County Sheriff’s deputies responded to a crash and vehicle fire at a dead end on Pilot Road in Millington. Fire units found the deceased victim in the front...
MILLINGTON, TN・1 DAY AGO
FOX 13 Memphis WHBQ

Woman shot after opening the the door at Midtown apartments, police say

MEMPHIS, Tenn. — A 38-year-old woman was rushed to the hospital after gunfire ripped through a Midtown apartment, according to Memphis Police. Police said the shooting happened at an apartment complex on North Belvedere Boulevard around 4:30 p.m. on September 22. The woman told police that she heard knocking...
2 DAYS AGO