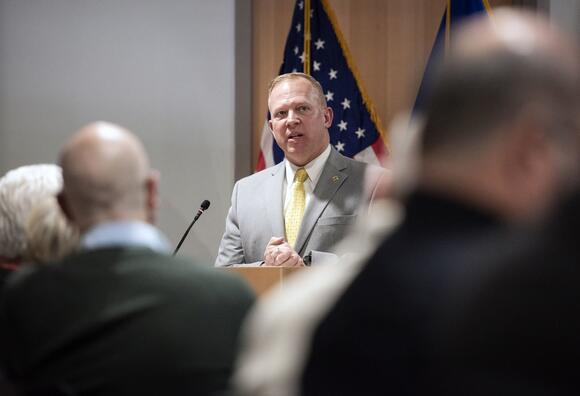 If Janesville City Manager Mark Freitag gets a vote of confidence from a city council in another state, he’ll leave Janesville for a new job in the Denver suburbs.

The city of Janesville hasn’t announced the news, but emblazoned across the top of the city of Westminster, Colorado’s website is a bold headline: “Mark Freitag: Selected as finalist for city manager.”

Freitag appears to now be the sole finalist for the top administrator role in Westminster, a city of 110,000 people, a 20-minute drive from downtown Denver in the Rocky Mountain foothills.

According to a memo posted to the city’s of Westminster’s website, Freitag has said in a statement he has accepted the position and is committed to leaving Janesville.

“I am honored that the city council has selected me as Westminster’s next city manager, and I eagerly anticipate their approval,” Freitag said in his statement.

The city of Westminster in a memo on its website also wrote that Freitag’s hire still must be approved by the city council at an Aug. 22 meeting.

It’s the second time in the last few months that Freitag has interviewed for a new job outside Janesville, where he’s been city manager since 2013.

In May, Freitag was one of a handful of finalists in what for him was ultimately an unsuccessful bid to become UW-Whitewater’s next vice chancellor of administrative affairs.

In its memo, the city of Westminster wrote that Freitag emerged as a top candidate because of his nine years of work as city manager in Janesville. But the city touched more on Freitag’s previous experience and accomplishments as a combat veteran and military base commander for the U.S. Army.

Under Freitag’s nine-year tenure in Janesville, the city manager has overseen a multimillion dollar, public-private revitalization of the downtown along the Rock River and the removal of the decrepit Monterey Dam on the south side.

Freitag also has overseen the city’s role in the private sale, demolition and clearing of the former General Motors plant, a massive brownfield property that earlier this year earned an environmental release by the state Department of Natural Resources.

Freitag’s tenure spanned the reemergence of the local economy after the Great Recession and GM’s departure as the city’s biggest employer and economic linchpin. The city has seen massive growth in net-new construction on Freitag’s watch—along with some polarizing utility and fee increases the city has enacted to try to keep pace with water and street infrastructure.

The city also over the past few years has seen a pattern of retirements and resignations in upper ranks at City Hall, including the departure and rehiring of top leadership in the offices of human resources, public works, economic development, and within the police and fire departments.

The city of Westminster said it is now on the backside of a development boom, and is seeking a leader who will help the city hone its operations.

Freitag is set to leave Janesville as the city is reviewing costs and a proposal to build an ice arena and conference center at the former Sears property at Uptown Janesville. It is a project that could be transformative to the struggling shopping mall and the retail economy on the city’s northeast side, but support for the proposal is mixed over concerns about the overall price tag.

The city is releasing initial cost estimates for that proposal at a public meeting Aug. 22—the same day Freitag’s hire in Westminster will be reviewed by the city council there.

City Council President Paul Benson said Wednesday that the council has been aware of Freitag status as a city manager candidate in Colorado and that Freitag has accepted a job offer there.

He said Freitag has not yet resigned from his job in Janesville, and he said the city doesn’t have a firm date by which he would need to start his new job.

Benson said the city council intends under state statute to wait until Freitag’s hire and contract is vetted and voted on by the Westminster council Aug. 22.

He said it is likely that a special city council meeting will be called to discuss next moves if Freitag does end up leaving. That discussion would include how to temporarily fill Freitag’s role while launching a search for a new city manager.

Freitag publicly acknowledged last year that he had applied for a job as city manager of Reno, Nevada, but he indicated that he ultimately was not offered that position.