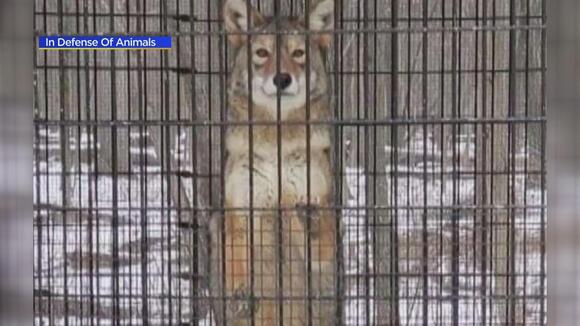 Comedian Ricky Gervais is calling for Rocky the coyote to be moved to an animal sanctuary in Colorado.

Gervais said the fact that Rocky is on anti-depressant medications is evidence of his inhumane captivity.

He said urgent action is needed to help him.

Rocky has been caged at the River Trail Nature Center for four years. He was turned over by a family who kept him as a pet.

They apparently thought he was a German Shepherd.

Several animal rights groups are fighting for his release.

Forest Preserve officials said there's no guarantee Rocky will thrive if he is moved since he was raised by humans.

CHICAGO (CBS) -- The 31st annual Aids Run and Walk kicks off later this morning at Soldier Field.The 5K and 10K runs start at 10:35 a.m.The annual event hosted by the AIDS Foundation of Chicago aims to raise awareness and funds to fight the disease.This year's theme "Forward Together" focuses on what can be done to create a better future for people living with aids and HIV.Those taking part can also run the race, from anywhere, using the RunGo app.
CHICAGO, IL・6 HOURS AGO
CBS Chicago

CHICAGO (CBS) -- The Lincoln Square, Ravenswood Apple Fest continues Sunday morning.More than 50 vendors will be lined up on Lincoln Avenue between Lawrence and Wilson from 9 a.m. until 6 p.m.You'll find any apple-based food you can think of along with art and other handmade items.Admission is free but there is a $5 suggested donation.Money raised will support beautification projects in the neighborhood.
CHICAGO, IL・6 HOURS AGO
CBS Chicago

CHICAGO (CBS) -- There's a special Hispanic Heritage Month performance happening in the western suburbs.Chicago's own Mariachi Herencia De Mexico is bringing their tour to the McAninch Arts Center on the College of DuPage campus in Glen Ellyn. The event takes place at 3 p.m.The group is Latin Grammy nominated and their show will feature special guest -- singer-songwriter Lupita Infante.Tickets start at $42.You can get them online by visiting atthemac.org.
CHICAGO, IL・6 HOURS AGO
CBS Chicago

PAWS Pet of the Week: Bennett

CHICAGO (CBS) -- Take a look at our PAWS Pet of the Week - Bennett.Bennett is a 1-year-old, 55-pound Retriever mix full of energy! He's a quick learner and would love an owner who would continue his training. He likes going on long walks where he can enjoy new smells, fresh air, and plenty of exercise. Bennett will thrive in a home with an adopter who lives an active lifestyle, or who has a yard for him to run around in.  Bennett is available for adoption at PAWS Chicago's Lincoln Park Adoption Center through their In-Person Adoption Appointment Process. Visit pawschicago.org to learn more and schedule your appointment today!
CHICAGO, IL・1 DAY AGO

CHICAGO (CBS) -- October is just around the corner, and the City of Chicago is ready to get in the Halloween spirit.For the third straight year, there will be a weeklong celebration in the city, appropriately dubbed Halloweeek.The festivities kick off on Saturday, October 22nd with the Upside Down Parade in Washington Park. The event gets its name because costumed families will be the parade as they walk through the park. Then, from Monday October 24th through Friday the 28th, there will be "Halloweek on the Block" traditional trick-or-treating events across the city.  And finally, on Saturday October 29th, the "Arts in the Dark" parade will take place in the Loop on State Street from 6:00 p.m. to 8:00 p.m. between Lake and Van Buren.
CHICAGO, IL・1 DAY AGO
CBS Chicago

3 members of Janus family died in 1982, and pain has passed on to generations

COMING SOON, 'PAINKILLER':  A multipart docuseries about the Tylenol Murders. Watch a preview and learn more about the case. CHICAGO (CBS) -- "When I see this bottle, it takes me back to the most tragic moment of my family's life," said Monica Janus.She was only 8 years old when a killer or killers deliberately laced Tylenol capsules with cyanide and placed the tainted bottles on the shelves of stores around the Chicago area. CBS 2 Investigator Dave Savini asked Monica's father, Joe Janus, if he thinks the crime will ever be solved. "I hope so, before I die," Joe said as he broke...
CHICAGO, IL・2 DAYS AGO
CBS Chicago

CHICAGO (CBS) -- People who live in Chicago's West Loop neighborhood are joining forces to try to stop crime. Neighbors met Saturday morning at Bartelme Park on South Sangamon and police and aldermen discussed a recent uptick in crime, including attempted abductions in the area. One activist is telling people not to give up hope, that the first key to a solution is acknowledging there is a problem. Police have arrested a man believed to be connected to a string of attacks and kidnapping attempts against women. And it is not all talk. The Chicago West Loop Community Organization is hoping to empower residents by hosting free self defense classes by POW! Gym. Basic skills and techniques will be taught. The classes will be offered Mondays starting at 5 p.m. and Saturdays at 10:30 a.m. until October 15.
CHICAGO, IL・14 HOURS AGO
CBS Chicago

CHICAGO (CBS) -- Chicago's Pedway - an underground tunnel that's useful to get from here to there but not the prettiest path.Turns out, it's not all drab down here.Morning Insider Lauren Victory shows us if you follow the beige floors and flickering lights, you might hit a pot of gold. Head down the George W. Dunne Cook County Office Building escalator and, like a mirage, it appears: the Illinois Lottery Claim Center. It's a place of instant happiness. CBS 2 immediately encountered Carl Hill doing a happy dance. "Heyyy! Heyyy! Big C! Lemme stop because I do have arthritis," he...
CHICAGO, IL・2 DAYS AGO

CHICAGO (CBS) – A west suburban restaurant paid a $17,000 find for not complying with a U.S. Department of Labor wage investigation.After being served with a subpoena in June of 2020, Reza's, of Oak Brook, did not provide payroll records.A federal judge found the owners in contempt, and after a court order, they complied with the subpoena.The subsequent investigation found no wage violations.
OAK BROOK, IL・1 DAY AGO
CBS Chicago

CHICAGO (CBS) – About one-third of Major League Baseball players are Hispanic. With Spanish language broadcasts on the MLB App, fans from all over the world can listen to home games.As CBS 2 celebrates Hispanic Heritage Month, Jackie Kostek introduced us to the Humboldt Park native you hear when listening to the Cubs, but that's not all he does."My father brought me to Wrigley Field when I was a kid," said Miguel Esparza. "As soon as I walked out and saw the field, I was in love."When you hear Esparza, a Spanish play-by-play broadcaster, on the call, you'd think this was...
CHICAGO, IL・1 DAY AGO
CBS Chicago

CHICAGO (CBS) –  A local group is protesting CTA operations. Commuters Take Action is demanding the city become more transparent about service times and delays and pushing to hire more bus and train operators. The group is expected to gather near the Daley Plaza during Saturday's celebration.
CHICAGO, IL・1 DAY AGO
CBS Chicago

CTA along with city leaders celebrate 75 years of service Saturday

CHICAGO (CBS) – The CTA is celebrating 75 years of service Saturday.City leaders are celebrating its diamond jubilee at 9:30 am in Daley Plaza.Guests are invited to enjoy commemorative giveaways including free tickets to ride some of the first historic train cars and heritage fleet busses. Those vehicles will be running through the Loop today from 10 a.m. to 2 p.m. Special tickets will be required to ride before 11 a.m. The CTA first took over all "L" operations back in 1947.
CHICAGO, IL・1 DAY AGO

CHICAGO (CBS) -- West Loop residents remain frightened by the attempted kidnappings of two women in their neighborhood.As CBS 2's Jermont Terry reported Friday night, you might expect people in the West Loop to be looking over their shoulders while walking at night. But some residents said the same fear remains in daylight – especially after the recent attempted kidnappings.And while police have someone in custody, that is not enough to ease concerns.You can find people walking dogs and hanging with their children in the park, and plenty of bike riders in the West Loop. But there is one thing...
CHICAGO, IL・1 DAY AGO
CBS Chicago

CHICAGO (CBS) -- Each week on our streaming-only newscast we're aiming to highlight a local food or beverage business with a unique story. In this week's spotlight, CBS 2's Audrina Bigos takes us to a vegan-only bakery in Old Town. Walk Down North Avenue in Old Town and you'll find a small, quaint bakery serving up lots of sweets - but there's no eggs, milk, or butter.   "I believe I can veganize anything you put in front of me."  And we have no doubt about that. Cheryl Nelson owns Sweet Vegan Bakes - celebrating one year in business. "Sweet Vegan...
CHICAGO, IL・2 DAYS AGO
CBS Chicago

COMING SOON, 'PAINKILLER':  A multipart docuseries about the Tylenol Murders. Watch a preview and learn more about the case. CHICAGO (CBS) -- On this day 40 years ago, Chicago was in crisis. The city was crippled, as was the country. Seven otherwise healthy residents of Chicago and the surrounding suburbs had died or soon would after inadvertently taking cyanide-laced Tylenol. Who did it? It's a question we still ask 40 years later. MORE READING: Three members of Janus family died in 1982, and pain has passed on to generationsThree key suspects appeared. One, James Lewis, spent 13 years in prison for a...
CHICAGO, IL・1 DAY AGO
CBS Chicago

CHICAGO (CBS) -- The Chicago West Loop community organization is hosting free self-defense classes Saturday. Instructors from POW gym will teach women basic skills and techniques to defend themselves against attackers. The classes start at 10:30 a.m. at the gym near Racine and Jackson Boulevard. Additional classes will be offered Mondays starting at 5 p.m. and Saturdays at 10:30 a.m. until Oct. 15.
CHICAGO, IL・1 DAY AGO

CHICAGO (CBS) -- Eleven people have been confirmed dead after Hurricane Ian ravaged Florida, and President Joe Biden is warning that it could be the deadliest hurricane in that state's history.Late Thursday, rescuers continued to search for survivors amid historic flooding – which swamped a hospital near Fort Myers. Workers were forced more patients to safety.More than 2 million customers were without power in Florida Thursday night, and  authorities were warning it could be days or even weeks before the power is back on.The storm came ashore as a Category 4 – one of the strongest ever to hit the U.S....
FLORIDA STATE・2 DAYS AGO
CBS Chicago

CHICAGO (CBS) -- The street in front of the Chicago Teachers Union headquarters on the Near West Side will be renamed for Karen Lewis.That section of Carroll Avenue will be known as "Karen Lewis CTU Way."Lewis was the longtime CTU president who led a Chicago teachers' strike against former Mayor Rahm Emanuel in 2012.Lewis died from brain cancer in 2021.
CHICAGO, IL・2 DAYS AGO
CBS Chicago

CHICAGO (CBS) -- Bond was denied Friday for a man charged in a brutal attack on the CTA Red Line over the weekend.We have been tracking the brutal attack since it happened. On Thursday, police announced the arrest of Solomon Washington, 30, of Chicago Heights in connection with the attack.Police said Washington is the man seen on a viral video smashing a glass bottle over another man's head on a Red Line train near the terminal at 95th Street and the Dan Ryan Expressway.As CBS 2's Tara Molina reported Friday, it turns out Washington has a long rap sheet –...
CHICAGO, IL・1 DAY AGO