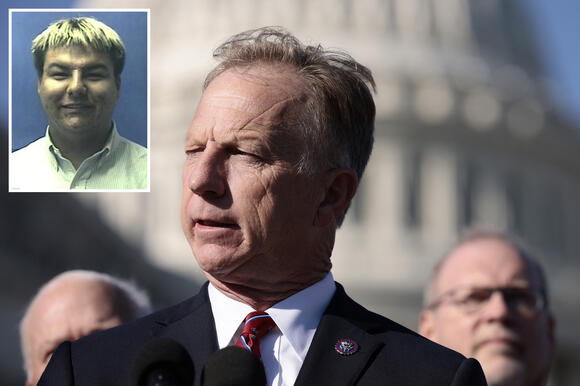 An Oklahoma man pleaded guilty Wednesday to threatening and stalking Rep. Kevin Hern after years of targeting the lawmaker from his state, officials said.

The pleas came after Keith Eisenberger, 39, made increasingly “concerning statements” about the 60-year-old Republican and his family online, according to the feds.

Eisenberger — who is known to show up uninvited to political events and try to befriend lawmakers — started to publicly harass Hern after he was appointed in 2018, prosecutors said.

In 2019, Eisenberger showed up at the lawmaker’s Washington, DC office and told Capitol Police he should have been considered for his House seat. He told cops he had a one-way ticket to Washington and would not return to Oklahoma until Hern resigned, officials said.

In 2020 he wrote on social media that Hern should be “federally executed,” and threatened to “assault” the congressman in another post a year later, according to the Department of Justice.

The threats escalated in May when he took to social media and threatened to kidnap Hern and his wife Tammy Hern, officials said.

The terms of the plea deal were not disclosed by prosecutors. Under federal statutes, the felonies could carry maximum prison sentences of 25 years.

More than three-quarters of voters in New York’s 3rd Congressional District say sketchy Rep. George Santos should step down, according to a new poll. The survey from Newsday and Siena College found that 83% of Santos’ constituents view him unfavorably, including 78% of Republicans. A total of 78% of voters in the Nassau County and Queens district want the 34-year-old GOP lawmaker to resign, including 89% of Democrats, 72% of independents and 71% of Republicans. Just 13% say Santos should stay on, while 9% said they didn’t know or had no opinion. Additionally, three-quarters of voters feel Santos cannot be an effective representative...
NASSAU COUNTY, NY・3 HOURS AGO
New York Post

They made their body modification fantasy a reality — at the expense of family. A former banker who covered their body in tattoos and piercings in a bid to become the world’s “first genderless dragon” is speaking out about the dramatic body transformation. Tiamat Legion Medusa, 61, who hails from Texas, has spent the past decade undergoing an epic metamorphosis into the mythical monster. In an interview with YouTuber Anthony Padilla, Medusa — who was born Richard Hernandez, and now uses they/them pronouns — explained they were working as a high-flying financier before deciding they could no longer partake in corporate...
TEXAS STATE・5 HOURS AGO
New York Post

A Regents exam administered to thousands of New York students last week was blasted by critics as “unconscionable and shameful” for including “loaded” questions about Israel. A group of Jewish leaders and civic organizations ripped a section of the test that showed maps of the changes to Israel’s borders over the decades and asked two questions that gave a “dishonest” impression about the Jewish state’s expansion. “The maps lack all context,” former state Assemblyman Dov Hikind said. “Specifically that border changes were the result of successive wars started by Arab states to annihilate Israel. Second, the questions, at best, lend...
1 HOUR AGO
New York Post

A pregnant mom discovered her baby wasn’t the only thing growing in her stomach. Eve Lincoln from Hudson Valley, New York, found out her unborn baby was sharing a space with a melon-sized cyst — and her hormones were feeding both the baby and the cyst. When she was seven weeks pregnant with her third child, an ultrasound showed a small cyst on her right ovary — but there was no apparent reason to be concerned initially. Doctors advised against surgery to remove the cyst since it could potentially add risk to the baby and it wasn’t causing any issues at the time. However,...
2 HOURS AGO