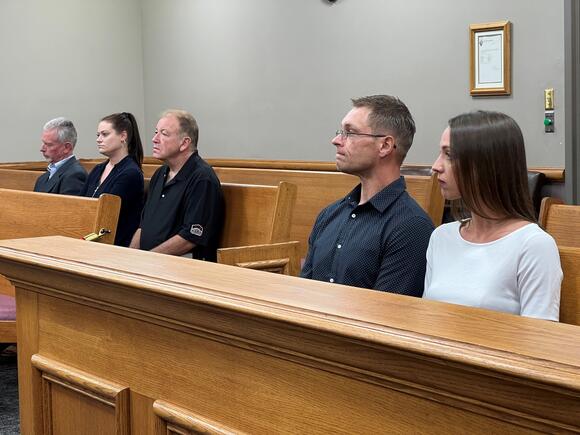 OCONTO – An Oconto couple’s request for a temporary injunction to halt wedding and other outdoor events at a bordering property was denied Wednesday by Oconto County Judge Jay N. Conley.

“The very need for a temporary injection is based on the concept of irreparable harm,” Conley said. “I don’t see any irreparable harm to the plaintiff and letting the case play out through the process.”

Conley’s decision has no affect on the lawsuit itself, in which the Thomsons are seeking a court declaration that city’s decision early this year to grant Sowle and Jensen a three-year trial to operate the business is illegal, and a permanent injunction barring the use of the property for outdoor events.

The lawsuit contends an outdoor venue isn't allowed under city zoning code, city officials knew it violated city’s ordinances when they approved it, and that the trial period violated state law because it was not consistent with the city’s comprehensive plan.

Before ruling, Conley heard from attorneys representing the Thomsons, the city and the mayors, and Sowle and Jensen.

“The plaintiffs find themselves in the unfortunate position of having to try and enforce the city ordinances,” said Frank Kowalkowski, who represents the Thomsons.

Kowalkowski said that the city disregarded its own rules and officials violated state law requiring them to “take care that city ordinances are observed and enforced,” adding that even City Attorney Frank Calvert told the council at one meeting that an outdoor venue is not a permitted use of an R-2 zoned property.

“I think the law is clear … this three-year trial basis, whatever you label it, is contrary to R-2 zoning … its own attorney and others confirm that … it’s got to be stopped,” he said.

Kowalkowski also contended that the council rushed approving the trial with little or no discussion or apparent recognition of the Thomsons' complaints or Calvert’s opinion.

“That’s what’s most shocking,” he said.

Ashley Lehocky, representing the city and the mayors, told Conley that the Thomsons are “trying to interrupt” the city’s legislative process.

While the Oconto’s comprehensive plan and future land use map identified the Sowle-Jensen property as one that would likely develop into single-family residential, “it’s no longer ideal” for that purpose, Lehocky said.

She noted that the property is in the shadow of U.S. 41, with a campground, park and sports complex to the east. Property to the south zoned rural development that can be used as campground, golf course or a dog kennel.

“We know that recommendations from the Plan Commission to the City Council suggest that there’s a belief that this property is suitable for this kind of use, for a barn wedding venue,” Lehocky said.

Though “inarticulately drafted,” the three-trial basis documents outline the conditions for outdoor ceremonies that are already accounted for in the city’s nuisance code, she added.

“From a zoning perspective, what this couple is doing, as I understand it, is really no different than renting out their home on Airbnb as far as the barn is concerned, then having the ceremonies on the outdoor potion of the property,” Lehocky said. “There’s nothing in the city’s code that prohibits them from doing this, simply because that activity results in a profit.”

Lehocky, who was hired by the city’s insurance carrier, said if Oconto wants to allow a wedding venue on the property, its “elected officials have the ability to act in their legislative capacity to explore and potentially make amendments to their zoning code” to that end.

“I think that likely there have been missteps along the road, but the Thomsons shouldn’t be able to turn that fact as a 'gotcha' for astronomical attorney fees … when really what they’re hoping to accomplish is to prevent legislative choices and changes to the city’s zoning code,” she said.

The Thomsons in their lawsuit are seeking attorney fees, and at least $50,000 in damages.

Rene Lesperance, representing Sowle and Jensen, said the detail mostly ignored by the plaintiffs is that that the property is his clients' primary residence, and zoning codes allow home occupations as an accessory or secondary use.

Lesperance noted that in their initial filings, the Thomsons made clams of “irreparable harm” but a follow-up brief contended that irreparable harm is not necessary for an injunction. Lesperance said he didn’t believe that to be an accurate statement of the law.

An injunction isn’t warranted, he said, because there no evidence of such harm.

“When you think about a temporary injunction, you think person-on-person assault or crimes, or harassment ... you think about intellectual property cases trade secrets, when you can’t 'unring' the bell when those get released over the internet, or people being forced to relocate from their homes, or have their homes torn down,” Lesperance said. “Those are (instances of) irreparable harm.”

Conley agreed, noting “the city is an ideal place where these types of controversies and disputes should be handled.”

“These are things the city and the community should decide in a democracy,” he said.

Conley said he also can’t at this point determine which side would be likely to eventually prevail. 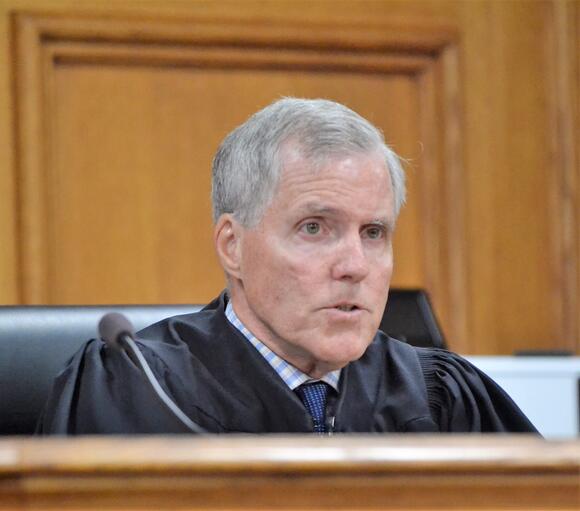 “I think the whole process should really play out with discovery and a trial if necessary,” he said. “Attorney Kowalkowski and the plaintiffs have made serious claims against the city, which deserve a day in court, but I’m not prepared to rule on those things today and say one side is right or the other side is wrong.”

“I have an open mind on the merits,” he added. “I think it’s more complicated than either side is making it.”

The next step in that process is scheduled for Aug. 16, when the City Council is slated to consider whether to approve Sowle and Jensen’s request for a conditional use permit to operate Oconto Riviera.

The council on June 30 voted to add special event venues and wedding barns to the list of conditional uses available to property owners on R-2 zoned properties.

The city amended the ordinance at the request of the couple, who said that customer uncertainty caused by the three-year trial and the Thomsons’ lawsuit had “crushed” the business, as they’ve been unable to book any future events.

After the hearing, Kowalkowski said if the condition use permit is granted, it may be challenged because it would be their position that the amendment process was also done improperly.

FOR MORE OCONTO COUNTY NEWS: Check out our website!