5 arrested for assault and robbery in Brentwood 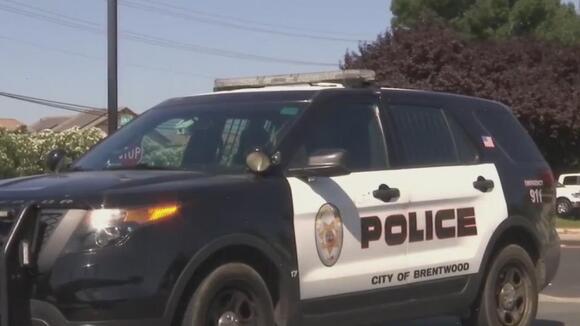 ( KRON ) — Five suspects were arrested Tuesday after an altercation in the Brentwood City Hall parking structure. Officers from the City of Brentwood Police Department responded to the incident on Tuesday around 6:16 p.m., according to a social media post from the department.

The victims had been at the parking structure when they were challenged to a fight by a group of suspects who then followed them to Windsor Park in a vehicle and threatened them with a gun, the release states. No one was injured during the altercation.

While the first incident was under investigation, another group of victims was assaulted and robbed at gunpoint by the same suspects at the parking structure. The suspects’ vehicle was spotted by a Brentwood police officer. All five suspects were taken into custody without incident.

The identities of three of the suspects are being withheld due to their age. All five were placed under arrest for robbery, battery and related charges. The alleged firearm used in the incident has not been recovered.

Anyone with any information about these crimes is encouraged to call the Brentwood Police Department at (925) 809-7911.

PETALUMA, Calif. (KRON) — A man was arrested for assault with deadly weapon, violation of probation, and fleeing police on several occasions, according to the Petaluma Police Department. On Thursday at around 12:28 p.m., Smart Code Compliance officers reported to PPD of a male who attempted to assault them when they tried to remove him […]
PETALUMA, CA・4 HOURS AGO
KRON4 News

PACIFICA, Calif. (BCN) — A Pacifica Police Department officer interrupted a catalytic converter theft in progress early Thursday morning. On Thursday at 1:46 a.m., the officer came across the theft-in-progress in the area of De Solo and Navarre drives. Police said the suspects immediately fled the scene in a gray four-door BMW sedan. The driver […]
PACIFICA, CA・9 HOURS AGO
KRON4 News

SAN MATEO CO., Calif. (BCN) — The San Mateo County Sheriff’s Office on Saturday morning arrested a man in connection with attempted murder and attempted rape. Catalino Ortiz-Perez, 35, of Redwood City, was also arrested on suspicion of domestic violence, according to deputies. On Saturday at 1:30 a.m., deputies responded to the 400 block of […]
REDWOOD CITY, CA・9 HOURS AGO
KRON4 News

BERKELEY, Calif. (KRON) — A woman tried to lure a 12-year-old boy into her car earlier this week, the Berkeley Police Department announced in a Nixle alert. The alleged incident happened on Tuesday in the area of Sacramento Street and Addison Street. Around 5:30 p.m., the boy was riding his scooter on the sidewalk of […]
BERKELEY, CA・22 HOURS AGO

A man was shot in killed in Oakland on Friday night, according to a statement from Oakland Police Department.
OAKLAND, CA・4 HOURS AGO
KRON4 News

OAKLAND, Calif. (KRON) — One person is dead after a shooting Friday afternoon in Oakland, the Oakland Police Department (OPD) confirmed to KRON4. The shooting happened around 2 p.m. on the 4400 block of International Boulevard where three people were shot. The shooting involved a Brink’s truck, the company confirmed to KRON4 in an email. […]
OAKLAND, CA・23 HOURS AGO
KRON4 News

Two people were arrested on suspicion of stealing catalytic converters in the early hours of Saturday morning, according to a tweet from San Jose Police Department.
SAN JOSE, CA・57 MINUTES AGO
KRON4 News

SAN JOSE, Calif. (KRON) — Police are on the scene of a pellet gun shooting in central San Jose, according to a tweet from San Jose Police Department. The shooting reportedly took place near Ruff Drive and the Guadalupe River Trail. Police say one man was shot and suffered an injury that was not life-threatening. […]
SAN JOSE, CA・4 HOURS AGO

HOOVER PARK, Calif. (KRON) — Redwood City Police have announced the arrest of a suspect who fired multiple rounds that struck the Boys and Girls Club building in Hoover Park last month, the department announced. The incident occurred on Aug. 19 when a suspect fired multiple rounds from a handgun in the park. The intended […]
REDWOOD CITY, CA・1 DAY AGO
KRON4 News

Home burglaries on the rise in Hillsborough

HILLSBOROUGH, Calif. (KRON) – On the Peninsula, Hillsborough police are sounding the alarm on a spike in home burglaries. Four have been reported just this month. It appears that a group of thieves is targeting affluent neighborhoods and breaking in when nobody is home.  The first was on Sept. 8 in the 2800 block of […]
HILLSBOROUGH, CA・1 DAY AGO
KRON4 News

SAN FRANCISCO (KRON) – The San Francisco Police Department arrested a suspect in a series of burglaries at construction sites, along with an accomplice, according to a press release. “Since July 2022 San Francisco Police Department investigators assigned to the Burglary Unit had been investigating a series of residential construction site burglaries that involved a […]
SAN FRANCISCO, CA・1 DAY AGO
KRON4 News

Over $52K in cash recovered after checks were stolen from Napa residents’ mail, police say

NAPA, Calif. (KRON) — Over $52,000 in cash was recovered after an investigation looking into a case of stolen checks and identity theft, the Napa Police Department announced this week in a Facebook post. Napa police reported an “influx” of stolen checks dating back to June — several cases of checks being stolen when victims […]
NAPA, CA・19 HOURS AGO

SAN PABLO, Calif. (KRON) — A Richmond high school was temporarily sent into lockdown on Thursday after a man with a knife ran toward its campus, the San Pablo Police Department (SPPD) said. The man was being pursued by police for an earlier incident. SPPD officers responded to the area of Vale Road near what […]
RICHMOND, CA・1 DAY AGO
KRON4 News

MOUNTAIN VIEW, Calif. (KRON) — A toddler was riding a training bicycle on a sidewalk outside Mountain View Library when a vehicle struck the toddler and his father. The accident happened at 11:10 a.m. Friday. “The toddler and the father approached the driveway on the south side of the building when a driver in a […]
MOUNTAIN VIEW, CA・19 HOURS AGO
KRON4 News

OAKLAND, Calif. (KRON) — The Oakland Police Department is warning the public of an uptick of robberies at ATMs over the past month. In several instances, the victim completed their transaction and was walking away from the ATM when they were confronted, according to a Facebook post from OPD. Armed individuals then rob the victims […]
OAKLAND, CA・1 DAY AGO
KRON4 News

BERKELEY, Calif. (BCN) — Police in Berkeley are investigating two brush fires that were set Friday at a housing construction site at People’s Park. Police are investigating the incident, which occurred Friday at around 10:45 p.m., as arson. An unknown suspect set the two brush fires, which occurred in the center area of the park […]
BERKELEY, CA・8 HOURS AGO
KRON4 News

PLEASANT HILL, Calif. (KRON) — Two men were detained in connection to an assault with a deadly weapon earlier this month, the Pleasant Hill Police Department announced in a news release. Police are investigating an incident on Sept. 9 around 10:55 p.m. in Pleasant Oaks Park where shots were fired by two suspects. The two […]
2 DAYS AGO
KRON4 News

A man was attacked and had his bicycle stolen while out walking on Sunday, according to a Nixle report from El Cerrito Police Department.
EL CERRITO, CA・2 DAYS AGO
KRON4 News

SAN JOSE, Calif. (KRON) — A San Jose man was arrested on Tuesday after police responded to a domestic violence call at his home. The San Jose Police Department said officers found a large stash of guns at the residence of Gary Redeker, 41. Police were called to the 1000 block of Malott Drive at […]
SAN JOSE, CA・1 DAY AGO