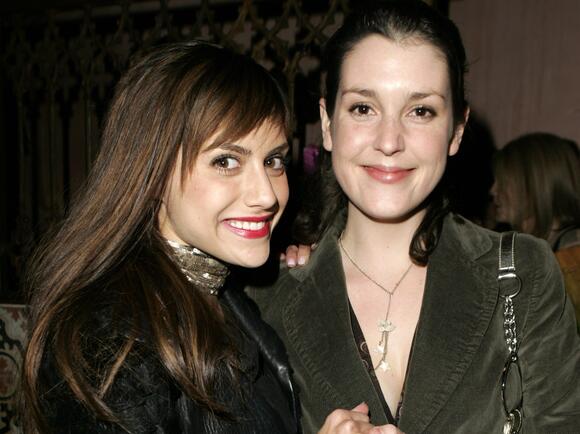 Melanie Lynskey opened up about her friendship with Brittany Murphy in a new interview with InStyle .

Lynskey, who currently stars on the Showtime drama "Yellowjackets," spoke about Murphy's self-esteem and how the "Clueless" star's treatment in Hollywood affected her.

"I was friends with Brittany Murphy, and the way she viewed her self was always really heartbreaking to me — the things she felt she had to change to be a successful actor," Lynskey told InStyle . "She was perfect just as she was, but people were trying to cast her as, like, 'the fat one,' because when she was a very young teenager, her cheeks were a little bit round."

"People tell you that you're a particular thing, and it's very hard to fight back against," the "Candy" star added .

Murphy starred in films like "Clueless," "Sin City," and "Just Married." The actress died in 2009 at age 32, reportedly due to pneumonia and anemia .

Lynskey has also been vocal about the treatment she's received in Hollywood throughout the years. In January, the "But I'm a Cheerleader" star revealed she was body-shamed on the set of "Yellowjackets" — but that her costars on the Showtime drama stepped in to support her.

More recently, the New Zealander spoke about her "ridiculous" experience on the set of the 2000 film "Coyote Ugly."

Lynskey told The Hollywood Reporter that she and her "Coyote Ugly" costars were placed on a "regimen" for weight control. In addition, Lynskey also revealed that she wore shapewear on set.

"It was ridiculous, I was already starving myself and as thin as I could possibly be for this body, and I was still a [size] four," she told the outlet. "That was already people putting a lot of Spanx on me in wardrobe fittings and being very disappointed when they saw me, the costume designer being like, 'Nobody told me there would be girls like you.'"

Hayden Panettiere is looking back on the “heartbreaking” moment she relinquished custody of her daughter, Kaya, to Wladimir Klitschko amid her addiction struggles. The “Nashville” alum told Jada Pinkett Smith, Adrienne Banfield-Norris and Kelly Osbourne on “Red Table Talk” that the decision “wasn’t a discussion.” Panettiere, 33, claimed in a sneak peek of Wednesday’s episode, obtained by People, that her ex-fiancé did not “come to” her and share his reasoning for why “it would be good for” Kaya to live with him. “If he had … I would’ve said, ‘OK, that makes sense, I get it, I’ll come there to visit and stuff...
CELEBRITIES・22 HOURS AGO
Insider

"To this day, when I see that meme, it's something very hard for me to overcome," Chloë Grace Moretz said.
CELEBRITIES・18 HOURS AGO
Insider

Charlize Theron was originally the star in 'Sweet Home Alabama' but didn't like the script rewrite, says director

Forget Private Jet Controversies: Kris Jenner Admits To Buying Whole Apartment To Wrap Gifts And Then Forgetting About It

The Kardashians and Jenners get called out for a lot of things, from multiple Kim Kardashian PhotoShop fails to Kylie Jenner’s private jet flex. The family makes such an obscene amount of money — the two previously mentioned sisters are actual billionaires — that we normal folk simply cannot fathom living our lives the way the reality stars do. But when it comes to being unrelatable, matriarch Kris Jenner may have taken the cake in the Season 2 premiere of The Kardashians, when she admitted that she had an entire Beverly Hills condo in which to do her gift-wrapping, and that she’d forgotten it was there.
BEVERLY HILLS, CA・4 DAYS AGO

Director Andy Tennant recalled to Insider what it was like to watch audiences go into shock thinking he killed off his lead in original ending.
MOVIES・1 HOUR AGO
Insider

Every 'Dancing With the Stars' season 31 Elvis night performance, ranked from worst to best

There was a three-way tie between a D'Amelio, a comedian, and a "Bachelorette" star at the top of the leaderboard.
THEATER & DANCE・20 HOURS AGO
Insider

Kim Kardashian said North West dresses her sister, Chicago, for school: 'This year is the first time I've seen a glimpse that she likes her siblings'

Kardashian described getting her kids ready for school as a "madhouse," "chaos," and "amazing" in an interview on "Live with Kelly and Ryan."
CELEBRITIES・20 HOURS AGO
Insider

Ryan Reynolds shared an update on the status of the next "Deadpool" sequel, which is set for release on September 6, 2024.
MOVIES・15 HOURS AGO
Insider

The talk-show host shared her side of the story regarding Philbin's departure from "Live!" in her new book, "Live Wire: Long-Winded Short Stories."
CELEBRITIES・15 HOURS AGO
Insider

Creator Ryan Condal said that Milly Alcock and Emily Carey won't star in "House of the Dragon" season two, but he's open to their return.
TV SERIES・1 DAY AGO
Insider

Caleb McLaughlin said that his parents explained to him as a child that he wasn't as favored as his "Stranger Things" costars because he's Black.
MOVIES・15 HOURS AGO

Ned Fulmer said he "lost focus" in a statement released shortly after The Try Guys severed ties with him amid rampant online speculation over affair.
ENTERTAINMENT・17 HOURS AGO