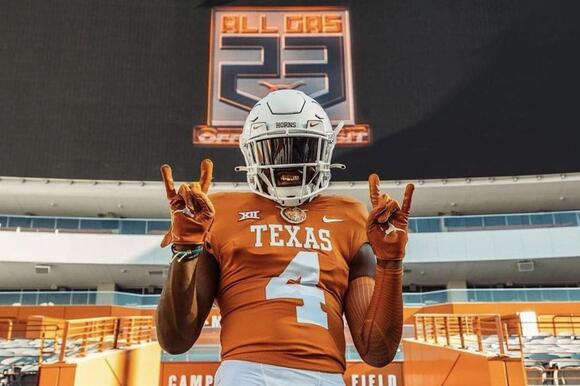 Top Longhorns target and No. 1 running back Cedric Baxter has made his college decision

The Longhorns have been on a historic recruiting run this summer which began with a commitment from quarterback Arch Manning.

Baxter debuted as the top running back in the 2023 SI99 and the number 21 player overall.

Baxter made his decision known live at Edgewater High School in Orlando and on his personal Twitter account.

He chose the Longhorns over Texas A&M, Florida, and Miami.

Tashard Choice made Baxter a priority the minute he was hired as the running back coach at Texas. Choice's relationship with Baxter dates back to his time at Georgia Tech. The longstanding relationship Choice has held with Baxter paid off in the end.

Baxter possesses day one starting ability at the next level. He will enter a competitive battle next year with current Texas running backs Jonathon Brooks and Jaydon Blue.

As a junior at Edgewater, Baxter ran for 1,651 yards and 22 touchdowns.

Baxter becomes the second running back commit for the Longhorns in the 2023 recruiting class, joining Tre Wisner (DeSoto, TX). He is the 22nd commitment overall for Steve Sarkisian in the 2023 class.

Andrej Stojaković made an official visit to the Texas Longhorns facilities on the weekend of Sept. 9 and was joined by his father, Peja Stojaković.
AUSTIN, TX・9 HOURS AGO
LonghornsCountry

Should Texas Star RB Bijan Robinson Be Getting More Touches?

The Texas Longhorns and Texas Tech Red Raiders have always had a heated rivalry, but Saturday's on-field postgame actions by a member of the Tech student body created cause for concern.
AUSTIN, TX・11 HOURS AGO
LonghornsCountry

Sarkisian discussed the loss to the Red Raiders and Texas' self inflicted mistakes.
AUSTIN, TX・1 DAY AGO

The Red Raiders have been given a large fine for storming the field vs. Texas, but they aren't paying it themselves
LUBBOCK, TX・1 DAY AGO
LonghornsCountry

Texas is now 2-2 for the season as it prepares for its Saturday night home game with West Virginia.
AUSTIN, TX・2 DAYS AGO
LonghornsCountry

The Texas Longhorns will be looking for rebound in Week 5 against West Virginia after their disappointing trip to Lubbock
AUSTIN, TX・2 DAYS AGO
LonghornsCountry

The Texas Longhorns are set to take on the Oklahoma Sooners on Oct. 8.
AUSTIN, TX・2 DAYS AGO