Firefighter assaulted, injured after responding to fire near I-280 in San Jose 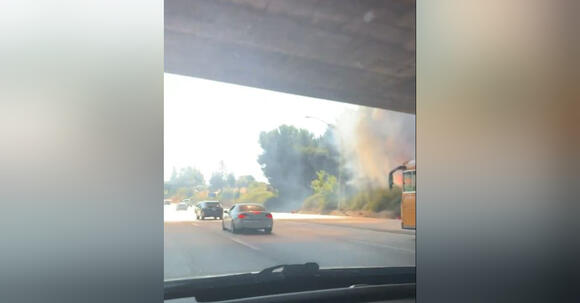 SAN JOSE, Calif. ( KRON ) — Crews responded to multiple brush fires that broke out Wednesday afternoon in the area of I-280 and Bird and Race Street in San Jose, the San Jose Fire Department tweeted . As of 5 p.m., the main body of the fire has been extinguished.

However, an SJPD firefighter was assaulted by a homeless individual while responding to a fire on I-280 at Race Street, officials said in a tweet . The firefighter sustained non-life-threatening injuries.

The San Jose Police Department arrested the suspect. The firefighter is being assessed for injuries.

Viewer video shows smoke and flames from the fire near the far right lane of I-280. SJPD said in its initial tweet no structures were threatened by the fire. The fire was first reported at 3:52 p.m.

Fires , homelessness , taxpayers money , now public servants assaulted, knowing this homeless person will have a better living in jail on our dime )( thanks San Jose )

The homeless with mental issues need to be locked up again. Letting them loose has not worked.

Export the homeless to the 🏜 deserts and let them set up encampments very far from civilization!!

Suspects arrested for firing into a crowd in East Palo Alto

EAST PALO ALTO, Calif. (KRON) — Three people have been arrested in connection with a shooting that occurred Sept. 10, the East Palo Alto Police Department announced Tuesday. Police said two shooters fired into a crowd of people, but nobody was hit. Police responded to 1959 Manhattan Avenue around 11:16 p.m. the night of the […]
EAST PALO ALTO, CA・14 HOURS AGO
KRON4 News

Arson suspected after latest fire along I-580 in Oakland

OAKLAND, Calif. (KRON) – The Oakland Fire Department is on the scene of a grass fire along eastbound Interstate 580, according to a tweet. Two engines are currently responding, and two more have been requested, the department stated in the tweet. No structures are threatened and crews are working on putting out the fire. Replying […]
OAKLAND, CA・1 DAY AGO
KRON4 News

OAKLAND, Calif. (KRON) – The California State Building at 1515 Clay Street in downtown Oakland was evacuated after a suspicious package was received, California Highway Patrol has confirmed. “The CHP is responding to a report of a suspicious package at the state building,” a CHP spokesperson told KRON4 News. “Out of an abundance of caution, […]
OAKLAND, CA・1 DAY AGO

Two teenagers have been arrested in the assault of a homeless man in Santa Cruz, according to a statement from Santa Cruz Police Department.
SANTA CRUZ, CA・17 HOURS AGO
KRON4 News

Oakland’s ShotSpotter technology records over 100 gunshots in one week

OAKLAND, Calif. (KRON) — Oakland’s ShotSpotter system recorded over a hundred gunshots across the city in less than a week, according to data released by Oakland Police Department. Between Sept. 26 and Oct. 2, OPD’s ShotSpotter technology reported 139 activations across the city. That’s an average of nearly 20 activations per day. Since the start […]
OAKLAND, CA・19 HOURS AGO
KRON4 News

A $125,000 reward is being offered for information that helps catch a suspected California serial killer.
OAKLAND, CA・21 HOURS AGO
KRON4 News

Police are investigating an assault against a cyclist on Thursday as a hate crime, according to Palo Alto Police Department.
PALO ALTO, CA・1 DAY AGO

Arrest made in Monday Hayward homicide

HAYWARD, Calif. (KRON) — A man was killed in a shooting in Hayward Monday morning, the Hayward Police Department (HPD) said. Hayward resident Zechariah Fisher, 24, was arrested on suspicion of murder. Police responded to the 25000 block of Carlos Bee Boulevard at about 5:54 a.m. for the shooting. Upon arrival, officers found the victim […]
HAYWARD, CA・1 DAY AGO
KRON4 News

OAKLAND, Calif. (KRON) — The Oakland Police Department was searching for a 10-year-old girl who went missing out of Richmond on Sunday, but she has been reported found as of Wednesday morning. Fallon Robinson was last seen on the 400 block of 22nd Street in Richmond around 3:45 p.m. Sunday. OPD reported she was wearing […]
RICHMOND, CA・12 HOURS AGO
KRON4 News

Victim will be okay after hang-glider crash at Fort Funston

SAN FRANCISCO (KRON) — One person is injured following a hang-gliding crash at Fort Funston, the San Francisco Fire Department said. The crash was reported around 6 p.m. Monday. The adult patient made a “hard landing” by falling ten feet and landing on their head, according to SFFD. The individual is in stable condition and […]
SAN FRANCISCO, CA・1 DAY AGO
KRON4 News

STOCKTON, Calif. (KTXL) — Stockton Police on Monday said there are two more shootings connected to the five killings they are investigating. The new information proves the killings stretch back to April of 2021 and are no longer contained to just Stockton. Police said a 40-year-old Hispanic man was shot and killed on April 10, 2021, around […]
OAKLAND, CA・1 DAY AGO

OAKLAND, Calif. (KRON) — Police are investigating Oakland’s 100th homicide since the start of 2022, the Oakland Police Department confirmed to KRON4 on Monday. The shooting reportedly occurred just before 3 p.m. on Monday afternoon in the 1300 block of Kirkham Street, according to a tweet from OPD. Patrol officers were dispatched to the area […]
OAKLAND, CA・1 DAY AGO
KRON4 News

SANTA CLARA COUNTY, Calif. (KRON) – Cal Fire’s Santa Clara Unit is working on putting out a fire on Mt. Uminum, in the Santa Cruz Mountains in Santa Clara County. The grass fire is approximately 2-3 acres, according to a tweet, and “extremely difficult access in steep terrain.” The fire is spreading slowly, the tweet […]
SANTA CLARA COUNTY, CA・1 HOUR AGO
KRON4 News

Who cleans up Bay Area homicides?

(KRON) – – The city of Oakland has seen over 100 homicides this year, Mary and Michael McIntosh have been at the center of many of them. Their most recent call, a shooting at a house party in Oakland that killed two teenage boys from Berkeley. Diablo Crime Scene Cleaners is a privately owned company […]
OAKLAND, CA・13 HOURS AGO
KRON4 News

Police left the scene of an active burglary at a home in San Mateo Saturday night after the homeowner said they were home when they actually weren't.
SAN MATEO, CA・2 DAYS AGO
KRON4 News

CUPERTINO, Calif. (KRON) – De Anza College was evacuated this morning after a fire alarm went off, according to the Santa Clara County Fire Department. The Foothill-De Anza Community College District Police Department showed up as well. No smoke or fire was visible, but “the building has been evacuated as a precaution,” the fire department […]
CUPERTINO, CA・1 DAY AGO
KRON4 News

SAN FRANCISCO (KRON) – The San Francisco Fire Department rescued four people from fentanyl overdoses on Monday evening in the city’s Mission neighborhood. The Street Overdose Response Team and the fire department responded to 24th and Mission streets at 5:28 p.m. where they found four adults “suffering from an overdose from a substance that included […]
SAN FRANCISCO, CA・1 DAY AGO
KRON4 News

STOCKTON, Calif. (KTXL) — Stockton Police have been investigating a “series of killings” throughout the city and in Oakland after all the killings were matched through ballistic evidence. In the six shootings in Stockton and one in Oakland, there has only been one survivor. On April 16, 2021, a 46-year-old Black woman was shot near […]
STOCKTON, CA・15 HOURS AGO