August full moon: how to take a good photograph of the Sturgeon supermoon on your phone or camera tonight 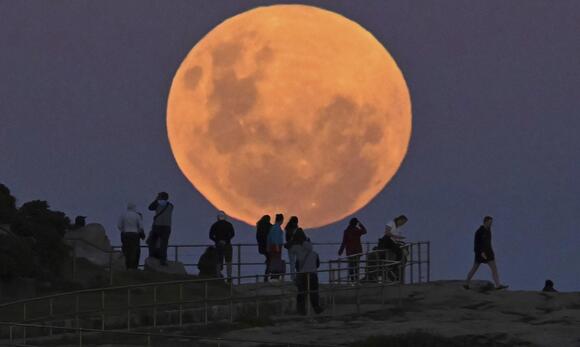 With a ‘sturgeon’ supermoon rising tonight, many people will pull out their mobile phones to try and get an Instagram-worthy photograph, but unfortunately the full moon is really challenging to get a great photo of.

Two reasons: it is very far away and unless you have a telephoto lens (which makes the moon appear closer than it is) it will always appear as a very small glowing dot in the frame.

Secondly, shooting at night is really difficult. Professional cameras allow you to change your ISO or your sensitivity rating which means you can shoot in low light situations without losing the quality of the image.

So can you use your smartphone camera?

The short answer is yes, but I would suggest downloading an app and shooting the moon through that instead of using the camera that is on the iPhone or Android. Some apps allow you to increase your sensitivity rating, allowing you to shoot in low light. I would suggest making sure there is another element to the image – so capturing the moon as it goes past, say, a beautiful bridge or a mountain. This allows the viewer to get perspective on the size of the moon and also creates a more interesting image.

But even with these apps you might be a little disappointed with the outcome.

In order to take an amazing image of the moon you really need a telephoto or zoom lens – the longer the better. As well as a professional camera and a tripod, also use a cable release or your two-second delay timer to release the shutter. This prevents camera shake when hitting the button. It allows you to not only increase the size of the moon in the frame but to get all the detail within it while keeping the image as sharp as possible.

Your settings will change depending on the quality of the camera you are using. But you want your ISO to be set to 100, which keeps the image quality at its highest. Set your file size to Raw – this allows the largest file size your camera has.

Aperture is not as important when shooting the moon, so aim for around f8.

So who gets the best pics of the moon?

I love this image shot by Matt Cardy at Glastonbury Tor in 2015:

Cardy has created such an impactful frame using his composition and focal length. The size of the moon in juxtaposition with the people creates an image that looks otherworldly.

“Once is happenstance,” wrote James Bond’s creator. “Twice is coincidence. Three times, it’s enemy action.” As European politicians and security agencies ponder the three explosions that caused leaks in the two Nord Stream gas pipelines under the Baltic Sea on Monday, they may find this adage of Ian Fleming’s helpful in resolving their doubts about who was responsible.
POLITICS・1 DAY AGO
The Guardian

The Florida governor passes the hat for disaster relief.
FLORIDA STATE・1 DAY AGO
The Guardian

The US and its allies would destroy Russia’s troops and equipment in Ukraine – as well as sink its Black Sea fleet – if Russian president Vladimir Putin uses nuclear weapons in the country, former CIA director and retired four-star army general David Petraeus warned on Sunday.
MILITARY・4 HOURS AGO

God’s Creatures is a film on why rapists are protected. Its makers are asking why distributors won’t pick it up

Paul Mescal and Emily Watson on why they made a film about an Irish fishing village, and what it has to say about sex and control in America
PUBLIC SAFETY・2 DAYS AGO
The Guardian

In an extraordinarily candid and profane interview with Rolling Stone, Michael Fanone – the former Washington police officer who was seriously hurt at the US Capitol during the January 6 attack – called the Republican House leader, potentially the next speaker, a “fucking weasel bitch”. Fanone...
PUBLIC SAFETY・3 HOURS AGO
The Guardian

You be the judge: should my husband stop removing the sink strainer?

Using the sink strainer is simple and could prevent a big plumbing hassle. I live with my husband, Simeon, in a house that has a sink strainer, which I think is quite useful. It helps with collecting any sort of food debris and, for me, it’s just an obvious thing to use. I’ve always had one in my home. But Simeon doesn’t feel that way.
LAW・2 DAYS AGO

The new prime minister began September promising a ‘new era’ for Britain. One economic crisis later, she has delivered
U.K.・2 DAYS AGO
The Guardian

Coolio, who has died suddenly aged 59, was an accessible star of the US west coast hip-hop scene whose 1995 single Gangsta’s Paradise became one of the most successful rap songs of all time, topping charts around the world. Although he had emerged in the late 1980s from the...
HIP HOP・2 DAYS AGO
The Guardian

‘The bleakest of worlds’: how Molly Russell fell into a vortex of despair on social media

Employees have grown to love the flexibility of remote working, and firms keen to keep their staff can do little about it, surveys find
ECONOMY・1 DAY AGO
The Guardian

Iran is awaiting the release of about $7bn (£6.3bn) in funds frozen abroad, state media said on Sunday, after it allowed an Iranian-American to leave the country and released his son from detention. Baquer Namazi, 85, was permitted to leave Iran for medical treatment abroad, and his son Siamak,...
MIDDLE EAST・13 HOURS AGO
The Guardian

Eight-and-a-half years after Vladimir Putin announced the annexation of Crimea, he gathered the elites of Russia in the Kremlin’s St George Hall for another land-grab ceremony: this time laying claim to four more Ukrainian regions. The annexation formalities were preceded by an angry, rambling speech that dwelled only briefly...
POLITICS・2 DAYS AGO
The Guardian

Maggie Haberman, the New York Times’ Trump whisperer, delivers. Her latest book is much more than 600 pages of context, scoop and drama. It is a political epic, tracing Donald Trump’s journey from the streets of Queens to Manhattan’s Upper East Side, from the White House to Mar-a-Lago, his Elba. There, the 45th president holds court – and broods and plots his return.
POTUS・17 HOURS AGO
The Guardian

An unaffiliated doctor involved in the decision to clear the Miami Dolphins quarterback Tua Tagovailoa after he was evaluated for a concussion during a recent game against Buffalo has been fired, according to an ESPN report on Saturday. ESPN, who cited a National Football League source, said the neurotrauma consultant...
NFL・1 DAY AGO
The Guardian