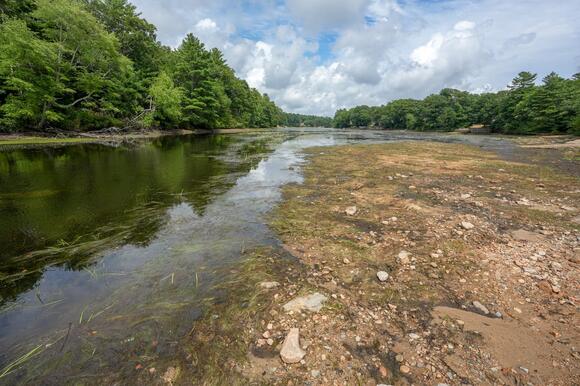 State authorities are using a new law to restore water levels in Johnson's Pond, a manmade reservoir in Coventry that is at the center of a bitter and highly litigious feud.

"The new legislation appears to be working," Jonathan Pascua of the Johnson's Pond Civic Association wrote on Facebook on Wednesday night, adding, "I say this cautiously."

Johnson's Pond is ringed with summer cottages, whose owners typically use the pond for recreational activities like boating and jet skiing. But a private company, Soscia Holdings, controls the dam that lets water in and out of the pond. Homeowners say Soscia Holdings routinely drains the pond to the point where it is unusable, effectively turning it into large mud pit.

Those frustrations prompted a push for legislation that was signed into law by Gov. Dan McKee last month to give the state more oversight. 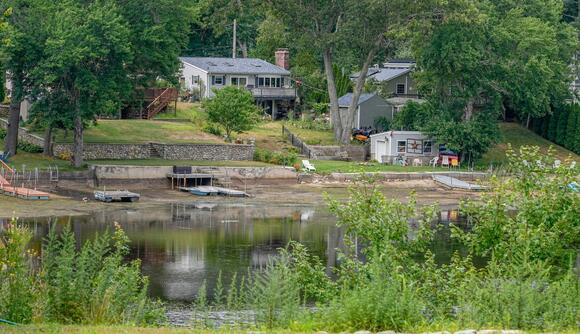 In recent weeks, members of a Facebook group called "Johnson's Pond Strong" have been posting pictures of docks and speedboats sitting on mucky land that was once the pond's bottom, and dead fish that have washed up on the shoreline. In some areas, the pond looked more like a shallow puddle.

After the DEM took legal action on Wednesday, Pascua wrote that the dam's gates had been closed, reducing the amount of water that was flowing out of the pond.

Under the new law, private dam owners aren't supposed to make significant changes to water levels without the permission of the Department of Environmental Management. In July, shortly after the law went into effect, the DEM issued a cease-and-desist order to Soscia Holdings, saying water levels "are at historic lows for this time of year."

Soscia Holdings responded by suing the DEM in federal court, and requesting a restraining order, which was denied.

Coventry officials met with McKee and DEM leaders on July 29 to discuss "the environmental crisis caused by the rapid depletion of the water levels of Johnson's Pond," according to a statement issued by the town. McKee assured them that "all legal options are being evaluated and legal remedies are being pursued."

On Wednesday, the DEM announced that it had issued a compliance order to Soscia Holdings, charging the company with violating the new state law and ordering it to restore the water level to normal.

The DEM will be working with the attorney general's office to enforce the order.

“Johnson’s Pond is an important community and state resource, and it is imperative that its water is held at reasonable levels in accordance with state law,” Attorney General Peter F. Neronha said in a statement. “As alleged by the Department of Environmental Management, the unchecked outflow of water from the pond by Soscia Holdings is not only a detriment to the pond and those who enjoy it, but not in compliance with a recently passed state law intended to protect water levels of dams and reservoirs."

Under the new law, private dam operators can be fined $1,000 a day for noncompliance. Soscia Holdings says the state's new law is unconstitutional and is challenging it in court. The lawsuit filed in federal court in July argues that the DEM is depriving the company "of all economically beneficial use of its property" by requiring it to be submerged.

The pond would be valuable as dry land, and preventing Soscia Holdings from draining the water is a "taking" of private property, the lawsuit claims.

WPRI reported last week that all three U.S. District Court judges in Rhode Island had recused themselves from the case because they had personal ties to people who live on or around the pond. As a result, a judge from New Hampshire will be brought in to preside over the case.

More: A private company controls water levels in this RI pond. It's led to a bitter feud

Johnson Pond's homeowners have long argued that low water levels are harmful to the environment, and may be the reason toxic blue-green algae is showing up in the pond. In late July, health department officials issued an advisory, telling people to avoid certain parts of the pond where toxic algae had been found.

In an affidavit submitted with the compliance order, DEM fisheries biologist Gabriel Betty stated that it was "more likely than not" that low water was harmful to freshwater mussels that live in the pond.