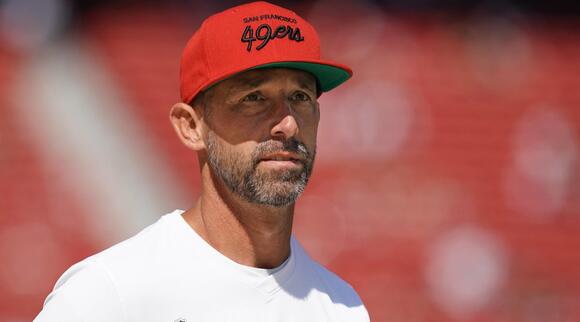 The San Francisco head coach has a “beef” with the league.

Kyle Shanahan has a unique sense of style as a head coach on the sidelines, most known for wearing a personalized version of the 49ers hat.

He retired that specific hat after the 2020 season, since that year the 49ers underperformed and missed the playoffs. But even if he wanted to bring it back, he can’t.

The 49ers head coach said on the Murph and Mac podcast that the NFL isn’t allowing him to wear any of his old hats, as he can only use new and approved San Francisco hats this season.

“I have such beef with them right now,” Shanahan said, via Yahoo Sports . “It’s a tough issue going on. They won’t let me pick out my own [hat]. They won’t let me wear any one that’s from a [previous] year, so I can’t wear like an older one. I’ve got to wear the new ones that they give this year. Unfortunately, there’s none I like wearing. Hopefully, we can figure it out or wait until Salute to Service. ... It’s just deals. I don’t want to go too hard and get fined or anything but trust me, I’m upset about it.”

Shanahan helped design this specific hat, as he went years without wearing one since he never found a hat he liked. Therefore, the NFL’s hat rule means more to him than maybe any other coach in the league.

This is all about marketing and sales. People see coaches and players wearing team gear on the sidelines and want one. It's that simple.

Back in the '80s, McMadman with the Bears wasn't allowed to wear non-sponsor headbands. I think he loved sticking it to the league by showing up every week with a band of his own design.

He should wear what he wants to wear and get the rest of his coaches and players to wear what they want as long as it’s related to their team (49er’s). And it’s tasteful

Tempers flared after Buffalo’s first loss of the season came against the Dolphins on Sunday.
NFL・1 DAY AGO
Sports Illustrated

The 49ers quarterback sent the internet into a frenzy after his ill-timed gaffe against the Broncos.
SAN FRANCISCO, CA・1 DAY AGO

The Hall of Famer was not too pleased with New York’s clock management at the end of the first half.
SAN FRANCISCO, CA・12 HOURS AGO
Sports Illustrated

The Miami swingman denied he has hair extensions, with a sly smile.
MIAMI, FL・1 DAY AGO
Sports Illustrated

The Fighting Irish beat the Golden Bears by seven points last week, and a missed call in the first half contributed to the result.
COLLEGE SPORTS・2 DAYS AGO

The Packers star said he passed information along to his teammates based on something he saw at Sunday’s game at Raymond James Stadium.
TAMPA, FL・17 HOURS AGO
Sports Illustrated

LeBron James Questions If He Has College Eligibility in Different Sport

The star quarterback played in Sunday’s loss to the Jaguars after suffering a rib cartilage fracture in Week 2.
JACKSONVILLE, FL・1 DAY AGO
Sports Illustrated

The Hurricanes fell to the Blue Raiders in stunning fashion on Saturday.
MURFREESBORO, TN・2 DAYS AGO

The Hall of Famer went on a legendary and very loud rant.
DALLAS, TX・1 HOUR AGO
Sports Illustrated

It’s too early to second-guess the Josh McDaniels hire, but it’s impossible to ignore what a different staff, with a less-talented roster, did last year.
NFL・1 DAY AGO
Sports Illustrated

Giants WR Sterling Shepard Carted Off With Injury During ‘MNF’

The veteran wideout suffered a non-contact injury on the team’s final drive of the game.
NFL・11 HOURS AGO
Sports Illustrated

The former Jacksonville coach went 2–11 last season before he was fired for cause.
JACKSONVILLE, FL・51 MINUTES AGO

Buccaneers to Practice in Miami Due to Hurricane Ian

The team remains scheduled to play the Chiefs in Tampa Bay on Sunday.
TAMPA, FL・18 HOURS AGO
Sports Illustrated

The ESPN personality detailed the path he believes the Huskers need to take to bring the three-time championship coach to Lincoln.
LINCOLN, NE・2 DAYS AGO
Sports Illustrated

The veteran quarterback feels his team has no excuses to not be ready for this weekend’s game against the Chiefs.
TAMPA, FL・1 HOUR AGO
Sports Illustrated

How Much Middle Tennessee Was Paid to Play Miami at Home

The Blue Raiders left Miami with a victory and plenty of money as well.
2 DAYS AGO