A local news source covering the town of Buckeye, Arizona, the people and places that make it one of the fastest-growing cities in the U.S. 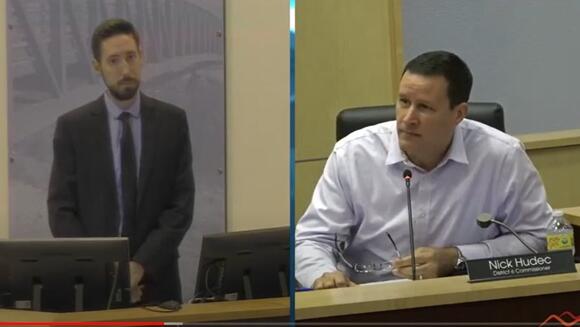 BUCKEYE — Even with a potential long discussion item postponed, the Buckeye Planning and Zoning Commission still needed more than an hour to get through its short agenda Tuesday.

Deputy Director of Planning Adam Copeland requested the board take preliminary plat approval for the San Madera housing development off of the agenda indefinitely.

There are still some water and well issues to work through for the proposed 546-unit, single-family-home development near the northwest corner of Broadway and Watson roads.

The 150-acre plat would have a density of about 3.74 homes per acre. It’s already zoned residential, and the preliminary plat approval was on the July 26 P&Z agenda, though it was continued then as well.

Copeland said because it’s a preliminary plat, it won’t need to be advertised again before it goes back on the agenda.

That left only two items. The board unanimously approved site plans for both 238 housing units that are part of Ironwood at Blue Horizons, along with a 50-foot-tall billboard to be placed near Jones Ford between I-10 and Yuma Road.

Ironwood sits on about 22 acres. It’s an elbow-shaped property zoned as mixed-use within a planned community that wraps between existing Blue Horizons homes and a commercial zone on the southwest corner of Blue Horizons Parkway and Jackrabbit trail.
Planner Andrea Marquez said parking was a major discussion item in planning with the developer, as there will be parts of the villa section where no on-street parking will be practical.

“We needed to make sure there will be enough parking for both residents and visitors,” Marquez said.

The property is described as Village 7 on the Blue Horizons Villages Community Master Plan.

Marquez said a different type of product was proposed by the initial developer before Capital West Homes came on board.

The villas won’t be required to have fire sprinklers but the apartments will have them.

Buckeye Traffic Engineer John Willett said Blue Horizons has paid into its share of the cost of a traffic signal to be built at Blue Horizons Parkway North/Van Buren Street and Jackrabbit Trail.

He also said the city is working with the county and the Arizona Department of Transportation about the bottleneck that two-lane Jackrabbit Trail is becoming — especially near I-10.

The digital billboard will be one of the first in the Buckeye area. However, it will be one of only about eight on I-10 or along State Route 85 in Buckeye because of spacing requirements.

The two-sided billboard will have minimum time amounts for static displays and won’t be operated after 11 p.m. each night, along with illumination restrictions between sunset and 11 p.m.

Improve the roads first, it’s over crowded enough!!! I don’t understand why they’re packing so many people into an area

A local news source covering the town of Buckeye, Arizona, the people and places that make it one of the fastest-growing cities in the U.S.