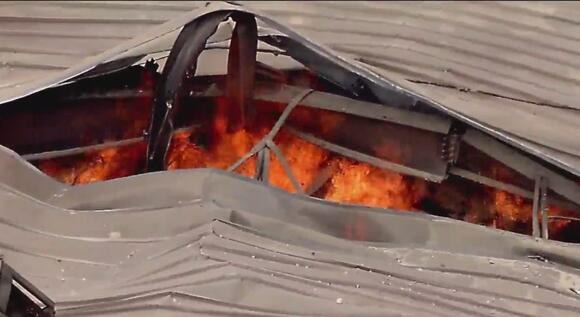 CHICKASHA, Okla. ( KFOR ) – A fire at the old Chickasha Manufacturing building uncovered what was illegally being stored there.

The more than 100,000 square foot building burst into flames on Sunday afternoon, which led to the discovery of thousands of pallets of hand sanitizer being stored both inside and around the exterior of the building.

“We’re looking in the neighborhood of 1.5 to 2 million gallons of 75% alcohol-based hand sanitizer burning,” said Tony Samaniego, the Chickasha Fire Chief. “Alcohol is flammable, very flammable, especially in that concentration.”

To put that amount into context, 1.5 million gallons of sanitizer is enough to fill up more than two Olympic-sized swimming pools. According to Samangiego, the building did not have an occupancy permit.

It turns out the hidden hazard wasn’t the building’s only violation.

“It did not have a working sprinkler system or fire alarm,” said Samangiego.

An engineer from the National Fire Protection Association (NFPA) says this should serve as a reminder of how dangerous storing material like this can be.

“With hand sanitizers, especially in warmer climates or stored in large quantities, because they are giving off vapor so readily, they can cause large scale fires such as this one,” said Alex Ing. “Many facilities can underestimate the intensity of fire that can result from one pallet of flammable liquid, let alone hundreds of pallets.”

The fire has been the talk of the town, but those in charge of the investigation said they’re still trying to figure out why that much hand sanitizer was being stored in the building.

The Chickasha Fire Department is also teaming up with the State Fire Marshal to determine the cause.

“We don’t know if it’s accidental, whether it was arson or not,” said Samangiego. “Until last night’s rain, we weren’t even able to get very close.”

OKLAHOMA CITY (KFOR) – For months KFOR has brought you news about Oklahoma City’s Creekside Apartments, which have been plagued with problems. Residents were faced with hot water and sewage problems this spring. Then in the summer, several went without air conditioning for weeks and the complex faced...
OKLAHOMA CITY, OK・1 HOUR AGO
KFOR

The Regency is a multi-million dollar apartment complex known for its location. Recently, it was the sight of chaos for hundreds of residents.
OKLAHOMA CITY, OK・1 DAY AGO
KFOR

Caught on camera: Thousands of dollars in tools, supplies stolen

Someone broke into a metro business early Sunday morning and stole thousands of dollars in tools and other supplies, leaving police to look over surveillance video in hopes of finding the thief.
OKLAHOMA CITY, OK・1 DAY AGO
KFOR

Brief chase comes to an end in Oklahoma City

One person was taken into custody following a brief chase in Oklahoma City.
OKLAHOMA CITY, OK・10 HOURS AGO

Drivers in Oklahoma City may need to find an alternate route to their destinations following a wreck on a busy interstate.
OKLAHOMA CITY, OK・9 HOURS AGO
KFOR

A 60-ton crane tipped over and hit a building on the corner of Robinson and Sheridan Avenue in downtown Oklahoma City.
OKLAHOMA CITY, OK・2 DAYS AGO
KFOR

Fire crews are currently investigating a downtown OKC building after evacuating it due to electrical smoke in the lobby, said Oklahoma City Fire.
OKLAHOMA CITY, OK・2 DAYS AGO

Hundreds of residents without shelter at apartment in downtown OKC

A chaotic afternoon for hundreds of residents at The Regency apartment complex in downtown Oklahoma City. Many may be homeless tonight after they were kicked out this morning due to a power outage. KFOR spoke with several residents who have nowhere to go.
OKLAHOMA CITY, OK・2 DAYS AGO
KFOR

Authorities are investigating after a man was found stabbed at an Oklahoma City gas station.
OKLAHOMA CITY, OK・1 DAY AGO
KFOR

Authorities in Moore are asking for the public's help as they search for a missing man.
MOORE, OK・13 HOURS AGO
KFOR

Edmond motorcycle officer fighting for life after being hit in pursuit

Police said Sergeant Joseph Wells, a 16-year veteran of the Edmond Police Department, was assisting with a pursuit involving a suspected drunk driver who had caused multiple wrecks in the city limits of Edmond.
EDMOND, OK・1 DAY AGO

Sheriff: 2 escaped Kiowa County inmates back in custody after 4 days as fugitives

HOBART, Okla. (KFOR) – The Kiowa County Sheriff’s Office (KCSO) says a pair of inmates who escaped the jail in Hobart on Sept. 19 were taken into custody on Sept. 23 after a Quartz Mountain community spotted the duo in the area. According to KCSO, Devon Ray McDonald...
KIOWA COUNTY, OK・3 HOURS AGO
KFOR

For decades, the egg-shaped dome of the First Christian Church stood at the corner of 36th and Walker in Oklahoma City. But on Monday morning, it was demolished.
OKLAHOMA CITY, OK・1 DAY AGO
KFOR

According to an arrest warrant filed in Oklahoma County on Monday, Garrett Trammel, 24, is facing five counts of assault and battery with a deadly weapon and one count of felony eluding a police officer.
EDMOND, OK・13 HOURS AGO
KFOR

The Oklahoma Turnpike Authority is warning motorists to prepare for traffic tie-ups until spring of 2023 in one of Oklahoma City's busiest areas.
OKLAHOMA CITY, OK・1 DAY AGO
KFOR

Police: One in custody after fatal shooting in SE OKC

The Oklahoma City Police Department is now investigating a homicide after an apparent shooting turned deadly on the city's southeast side Monday evening.
OKLAHOMA CITY, OK・22 HOURS AGO
KFOR

National Coffee Day is being celebrated on Thursday, Sept. 29 across the United States.
OKLAHOMA CITY, OK・7 HOURS AGO