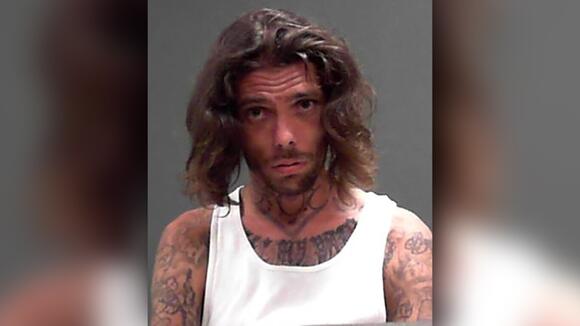 WHEELING, WV (WSPA) – A man accused of killing a Cherokee County man last month has been arrested in West Virginia.

Police in Wheeling, West Virginia said they were notified by a detective from South Carolina that 31-year-old Leonard Herbert Finch may have been in the East Wheeling area, according to our sister station WTRF .

Investigators also provided police with the nickname of someone who Finch may have been with.

Wheeling Police said they recognized the person whose nickname they were given and knew that he frequented homeless encampments in one section of the city.

Officers said they found Finch in the area of 18th Street and Eoff Street and he was taken into custody without incident.

Finch is accused of shooting and killing 42-year-old Mark Kevin Bruckler of Blacksburg during the early morning hours of July 24.

The Cherokee County Sheriff’s Office said that Finch and Bruckler were in an argument on Union Highway when the shooting happened.

Deputies said Finch’s mother, Sheila Mayfield Finch, helped him get away. She was later arrested and charged with accessory after the fact to a felony.

Leonard Finch is being held in the Northern Regional Jail in West Virginia where he will await extradition proceedings.

The Union County Sheriff's Office is still searching for an inmate who escaped Friday night. They said this isn't the first time he's escaped from jail.
UNION COUNTY, SC・14 HOURS AGO
WSPA 7News

Deputies offer reward for inmate that escaped in Union Co.

SPARTANBURG COUNTY, S.C. (WSPA) – A pedestrian died Wednesday night in a crash in Spartanburg. The South Carolina Highway Patrol said the crash happened around 9:45 p.m. on Highway 296 near Smith Road. Troopers said a Ford Mustang was traveling west when it hit a pedestrian in the roadway. The Spartanburg County Coroner’s Office has […]
SPARTANBURG COUNTY, SC・8 HOURS AGO
WSPA 7News

SPARTANBURG, S.C. (WSPA) – The Spartanburg Police Department announced the increase in reward money Wednesday following a fatal shooting. Police said family members have provided an additional $5,000 for any information that leads to the arrest for the death of Leonard Lyles, III. We previously reported that officials and family members offered a $5,000 reward […]
SPARTANBURG, SC・1 DAY AGO

GREENVILLE COUNTY, S.C. (WSPA) – One person died early Wednesday morning in a shooting in Piedmont. The Greenville County Sheriff’s Office said they responded to the 1700 block of Piedmont Highway around 3:36 a.m. after hearing gunshots in the area. Upon arrival, deputies located a man with at least one gunshot wound in the parking […]
GREENVILLE COUNTY, SC・1 DAY AGO
WSPA 7News

SPARTANBURG, S.C. (WSPA) The family of a man who died at the Spartanburg County Detention Center wants to know more about what happened. The Spartanburg County Coroner’s Office said 29-year-old Lavell Najah Lane died on Monday. The Racial Justice Network, along with the family of Lane, gathered in front of the detention center to express […]
SPARTANBURG COUNTY, SC・7 HOURS AGO
WSPA 7News

Chesnee Brooke Quinn, 28 was reported missing by her family, who had last seen her in June.
GREENVILLE, SC・23 HOURS AGO
WSPA 7News

A death investigation is underway in Union County after a hunter was found dead Wednesday morning.
UNION COUNTY, SC・14 HOURS AGO

CHEROKEE COUNTY, S.C. (WSPA) – A 17-year-old died Thursday morning in a single-vehicle crash in Chesnee. The Cherokee County Coroner’s Office said the crash happened around 10:45 a.m. on Horse Creek Road. The coroner said a 2004 Honda van was traveling south speeding past another driver when it lost control and ran off the left […]
CHEROKEE COUNTY, SC・1 HOUR AGO
WSPA 7News

The incident happened in a hotel parking lot on Remount Road; the Horry County officer was in Gastonia for a training session.
GASTONIA, NC・1 DAY AGO
WSPA 7News

Deputies were in a standoff Tuesday evening with an armed woman at a Greenville County hotel.
GREENVILLE COUNTY, SC・1 DAY AGO

The scene of a southwest Charlotte shopping center turned chaotic Tuesday morning when a fight in the parking lot escalated to a shooting and several parked cars got banged up in the process.
CHARLOTTE, NC・1 DAY AGO
WSPA 7News

Police arrested a man they said was spotted near a Gaffney middle school Monday afternoon with a gun.
GAFFNEY, SC・2 DAYS AGO
WSPA 7News

Deputies are looking for two people who stole hundreds of gallons of fuel from a Henderson County gas station.
HENDERSON COUNTY, NC・22 HOURS AGO
WSPA 7News

Power restored for over 3,000 on east side of Spartanburg Co.

There are over 3,000 people without power on the east side of Spartanburg County.
SPARTANBURG COUNTY, SC・1 DAY AGO
WSPA 7News

Governor Henry McMaster shook hands Wednesday with more than a dozen businesses from the Upstate who are working to recruit future talent.
ANDERSON COUNTY, SC・17 HOURS AGO
WSPA 7News

Portion of Spartanburg Co. road to close for bridge demolition

A portion of a Spartanburg County road will close while crews work to demolish a bridge on Business 85.
SPARTANBURG COUNTY, SC・20 HOURS AGO
WSPA 7News

Road projects are underway across Spartanburg, as a part of the county's resurfacing program.
SPARTANBURG COUNTY, SC・19 HOURS AGO