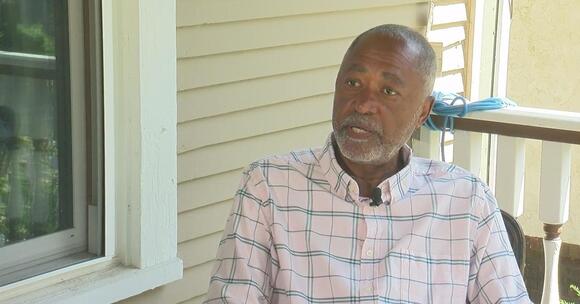 The incumbent lawmaker had 50% of the vote, while Samuels received 48%. But Samuels says his work is far from over.

The front porch of his north Minneapolis home is where Samuels sat and reflected on where he's been and where he is going.

"I'm not really a politician, remember I came into office in my early fifties," Samuels said. Before his run for congress he was a Minneapolis City Councilman and Minneapolis School Board member.

"It sends a message to the incumbent that her work needs serious help. She should listen to voters otherwise she can't keep her seat," Samuels said.

He added a leader's lifestyle is one of dedication and sacrifice.

"I would like to think I am a servant leader who puts himself in places of greatest pain and bring voice to the folks who hurt the most, "said Samuels.

He will continue to be that voice and advocate for the community he raised his family in.

For Samuels, his time as servant leader is not over. He refused to repeat what he's said in the past about not running for office again.

"I use to say that I did so clearly I shouldn't make any strong pronouncement," said Samuels.

What he will say is true leaders never fade into the background, they just dig in and work harder.

"I don't even know what it means to be a politician who enthusiastically runs for office and then loses and goes away. I don't understand that type of leadership. To me leadership as politicians is an occasional opportunity to turn that lifestyle into policy," said Samuels.

Omar said Republicans and "conservative Democrats" worked together to vote her out.

She said, "This win is for everyone who still believes that hate, division and regression will not be the legacy of the Fifth [District.]"

How could he lose to that. Something fishy here

he didn't lose they cheated do your job and investigate this she is a trader to America!!!!

WASHINGTON (AP) - The Supreme Court says it won't intervene in a lawsuit in which Dominion Voting Systems accused MyPillow chief executive Mike Lindell of defamation for falsely accusing the company of rigging the 2020 presidential election against former President Donald Trump.As is typical, the high court did not say anything Monday about the case in rejecting it among a host of others. Monday is the first day the high court is hearing arguments after taking a summer break.Lindell is part of a case in which Dominion also accused Trump allies Sidney Powell and Rudy Giuliani of defamation for falsely...
CONGRESS & COURTS・3 DAYS AGO
CBS Minnesota

ST. PAUL, Minn. -- After Ramsey County printed ballots listing the wrong Republican candidate for a state representative position, Minnesota's highest court has ordered new ballots be printed. The ballot listed Beverly Peterson instead of Scott Hesselgrave as the Republican Party candidate for state representative in District 67A, which is in the northeastern portion of St. Paul. Peterson died in August, and the Republican Party says it submitted a certificate of nomination and affidavit confirming Hesselgrave as the replacement candidate late that month. The error impacts all ballots for the 11 precincts in Ramsey County. The issue was...
RAMSEY COUNTY, MN・1 DAY AGO
CBS Minnesota

MINNEAPOLIS — A Minnesota judge who struck down key restrictions on abortion in the state has rejected a bid by a county prosecutor who hopes to appeal the ruling.Ramsey County District Judge Thomas Gilligan ruled Tuesday night that Traverse County Attorney Matthew Franzese is not entitled to intervene in the case. Franzese had hoped to pursue an appeal after Attorney General Keith Ellison declined to challenge Gilligan's previous ruling that Minnesota's restrictions were unconstitutional.Earlier in July, Gilligan threw out a series of laws enacted over the years, including a mandatory 24-hour waiting period, a requirement that both parents be notified...
MINNESOTA STATE・2 DAYS AGO
CBS Minnesota

Former President Donald Trump is suing CNN for defamation and asking for compensatory damages in excess of $75,000 and punitive damages of $475 million, according to a lawsuit filed Monday.He is claiming that the cable news giant has harmed his reputation with "false, defamatory, and inflammatory mischaracterizations of him" and that CNN's conduct "is intended to interfere with [his] political career."In particular, Trump argues that he's entitled to hundreds of millions of dollars in punitive damages because of CNN's use of the term the "Big Lie" to describe Trump's "stated concerns about the integrity of the election process for the...
POTUS・2 DAYS AGO

APPLE VALLEY, Minn. – Southwest of the Twin Cities an expensive battle is underway for one of the most coveted seats in Congress, which could tip the scale for who controls the U.S. House of Representatives. The rematch in Minnesota's Second Congressional District between DFL incumbent Angie Craig and GOP challenger Tyler Kistner is among the most competitive in the nation. The Cook Political Report, a nonpartisan group that analyzes elections, includes it as one of just 30 "toss-up" races in the country. Craig narrowly beat Kistner in 2020 by two points - under 10,000...
MINNESOTA STATE・1 DAY AGO