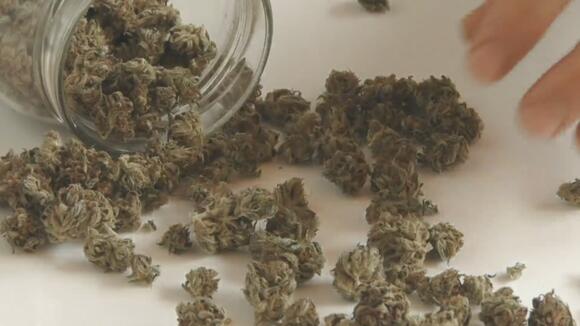 KANSAS CITY, Mo. — With recreational marijuana now on the ballot in Missouri come November , there is a growing question of how Kansas will respond.

So the ban remains in place while neighbor Missouri prepares for anticipated open season at spots like the From The Earth dispensary on Southwest Boulevard in Kansas City, Missouri.

That dispensary is less than a quarter mile away from the Kansas state line.

Currently you need a medical card to buy marijuana in Missouri but if the ballot initiative passes it would allow anyone over 21 to buy weed. So there are questions on how the state of Kansas and border cities may respond.

There is real excitement for the recreational ballot question at From The Earth’s Independence location and not just because it would open up sales to the public.

“Non-violent cannabis crimes will be expunged and that’s going to be the first time that’s ever been voted by the American people,” Tyler Diltz, vice president of retail for From the Earth, said.

Meanwhile in Kansas it’s the flip side. Statutorily, marijuana is illegal. If someone comes into the state and gets caught with marijuana that person could be charged with a criminal offense.

But there are signs that cannabis laws are loosening in Kansas.

KC dispensaries cheer for marijuana legalization being placed on ballot

But Kansas Democrats say the issue has been ignored by Republicans. In addition, marijuana legalization advocacy group NORML had strong words as well saying: “If Kansas officials witness their neighbor overwhelmingly vote to approve legalization, as Missouri appears to be set to do, and their reaction is to simply put more otherwise law-abiding individuals in jail for possessing a plant, they are only going to bring harm to themselves and their state.”

And even if Kansas passes medical marijuana legislation, Missouri-sold recreational marijuana would still be illegal in Kansas. There is also still a question on how police will handle this situation when people cross the state line and how aggressively authorities may move on enforcement.

This is not the first time Kansas has gone through this. Colorado has for a long time been a recreational state. But the Western border of Kansas is somewhat less developed when compared to the eastern side – so there will likely be a difference in how this situation is tackled.

📲 Download the FOX4 News app to stay updated on the go.
📧 Sign up for FOX4 email alerts to have breaking news sent to your inbox.
💻 Find today’s top stories on fox4kc.com for Kansas City and all of Kansas and Missouri.

Kansas just needs to get with the program and legalize it, other than having some sort of life altering cancer. it will be a huge economy boost for the state.

how about I say it like this I am a disabled 38-year-old man with a form of muscular dystrophy, that threw me out of work it just makes sense on a medical side let alone financial side to move forward with this instead of sit on the pot so to speak.

Kansas is a farming state and has a positive budget without legalization. Really do not understand why Kansas would not go ahead and legalize it and be one of the biggest and best in the world. Just such a waste for our farmers not to be raking in dough left and right. All the money in the states surrounding us and Kansas just sits there with a big loss. This plant has hundreds of uses and so many people want it and need it. Kansas is not helping much and dragging their feet as usual. Maybe one day they will legalize it before I am considered an old man

Sports betting will be a priority next legislative session: Missouri lawmakers

Lawmakers on both sides of the aisle are saying Missouri is playing a losing hand after not legalizing sports betting.
MISSOURI STATE・3 DAYS AGO
FOX4 News Kansas City

TOPEKA (KSNT) – The Kansas Department of Agriculture has issued a warning to Kansans that avian Influenza, or bird flu, could return to infect domestic and wild birds this fall. According to the KDA, highly pathogenic avian influenza (HPAI) may return in the fall as states adjacent to Kansas experience a rise in confirmed cases. […]
KANSAS STATE・2 DAYS AGO
FOX4 News Kansas City

4Star Politics: Key races and the issue that may decide it all

4Star Politics dives into a new FOX4/Emerson College Poll showing tight races and issues ahead of the November Election in Kansas.
KANSAS STATE・2 DAYS AGO

According to the Missouri State Highway Patrol, one person is dead and another is seriously injured due to a crash.
1 DAY AGO
FOX4 News Kansas City

An electrician told Ruth Stanturf his name was JJ Smith, but she learned his real name was Jim Shaddix, and he advertised free estimates
MISSOURI STATE・3 DAYS AGO
FOX4 News Kansas City

One person died from their injuries after a single-vehicle crash that occurred early Sunday morning.
KANSAS CITY, MO・23 HOURS AGO

The city reports Kansa, the bald eagle and Serena, the barn owl, were killed last week by raccoons that were able to breach space between an outside wood fence and the wired fence cage area where the birds were housed.
LAWRENCE, KS・3 DAYS AGO
FOX4 News Kansas City

KC experts weigh-in on how to educate, protect children from predator teachers

In one week, FOX4 has reported on three teachers around the Kansas City area who are accused of sex crimes involving their students.
KANSAS CITY, MO・2 DAYS AGO
FOX4 News Kansas City

One person is dead and two others are injured following a two-vehicle crush in Belton, Missouri, Sunday afternoon.
BELTON, MO・1 HOUR AGO
FOX4 News Kansas City

As many communities have since repealed or amended their dangerous animal ordinances the city of Leawood, Kansas is revisiting its own ordinance and is looking to the community for input.
LEAWOOD, KS・4 DAYS AGO

The El Paso-based Border Network for Human Rights is opening its new center in Presidio on Friday evening and one in Del Rio next Tuesday.
EL PASO, TX・23 HOURS AGO
FOX4 News Kansas City

Best farmers market in the US is in Kansas City area

With its 5-year Zero KC plan, Kansas City leaders hope to not only end homeless in the city but throughout the region.
KANSAS CITY, MO・3 DAYS AGO
FOX4 News Kansas City

It's officially into the first weekend of fall, and there are multiple events around the Kansas City area for you and the family to enjoy.
KANSAS CITY, MO・4 DAYS AGO
FOX4 News Kansas City

On Saturday, the University of Kansas football team will try to advance to 4-0 while playing at home in front of a sold-out crowd.
LAWRENCE, KS・2 DAYS AGO
FOX4 News Kansas City

New funding over the last two school years is part of the reason why Northeast High School has a band after roughly a decade without a band program.
KANSAS CITY, KS・3 DAYS AGO
FOX4 News Kansas City