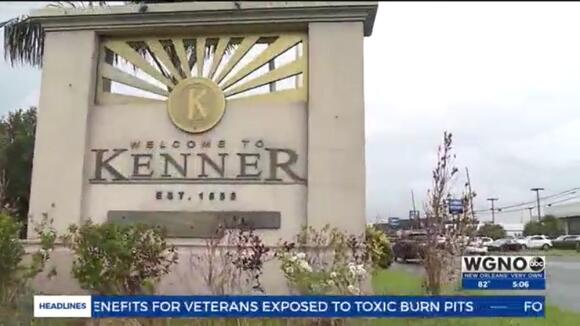 Kenner, La. ( WGNO )— The City of Kenner consistently ranks as one of the safest places to live in the state and the new police chief plans to keep it that way.

There have only been 4 homicides in the city this year, and all 4 have been cleared by arrest.

Chief Keith Conley took office in early June and he stated, “I was lucky to get this department. This department has been well run for the last 20-30 years.”

Conley should know, he spent over 20 years with the Jefferson Parish Sheriff’s Office, then as city attorney and city prosecutor.

The chief attributes much of the success of the department to the residents of Kenner, “We have total buy-in. The stakeholders, they support us. They know that if they see something unusual to pick up the phone an dial 911.”

So far this year, all major crime categories have trended down, but vehicle burglaries and auto thefts continue at 184 and 96, respectively. A percentage of the thefts are from people failing to return rental cars.

According to Conley, “Car burglaries for unlocked cars have gone down but I’ve also known that our activity on the road has gone up.”

What the chief worries about is the prospect of an active shooter at a school. The department has initiated relationships with various school agencies across the city to fortify campuses and insure student safety.

“We’ve learned a lot from what we’ve seen across the nation. So I think that anybody that sites in this chair or any other chair in law enforcement has to worry about the mass shootings that are going on across the country,” said Conley.

It is no secret that the NOPD is strapped for police officers and struggling with a staff shortage, but today the NOPD had reason to celebrate because they graduated 1
NEW ORLEANS, LA・1 DAY AGO
WGNO

Man shot, wounded in his vehicle near the French Quarter overnight

According to the NOPD, a 40-year-old man got into an altercation with another male outside his residence near Gallier and Royal Streets just after 7 a.m.
NEW ORLEANS, LA・13 HOURS AGO
WGNO

According to the Covington Police Department, shots were fired at the intersection of W. 33rd Ave, and N. Filmore St.
COVINGTON, LA・8 HOURS AGO

According to troopers, 23-year-old Naema Johns of Beaufort, South Carolina was killed in the incident.
MANDEVILLE, LA・11 HOURS AGO
WGNO

"We are talking about the receivables it's in the millions, we have a lot of outstanding tickets," said Chief Financial Officer for the City Norman White. That's why the city is kicking off their amnesty program which will waive late fees.
NEW ORLEANS, LA・1 DAY AGO
WGNO

According to deputies, Dustin King, 4, and Shanda Honaker, 45 were arrested at a residence in Angie on September 28.
WASHINGTON PARISH, LA・1 DAY AGO
WGNO

A member of the St. Tammany Parish Drug Enforcement Administration is behind bars Thursday on reported domestic violence charges, according to Sheriff Randy Smith.
COVINGTON, LA・2 DAYS AGO

The Humane Society of Louisiana is offering an award for anyone that can help bring the two back together.
METAIRIE, LA・1 DAY AGO
WGNO

The incident happened near the intersection of Chef Menteur Highway and Bundy Road.
NEW ORLEANS, LA・1 DAY AGO
WGNO

New Orleans mayor LaToya Cantrell has been questioned by the New Orleans Metropolitan Crime Commission after a letter sent Thursday alleges the mayor has been living in the Upper Pontalba, a city-owned building, for months.
NEW ORLEANS, LA・2 DAYS AGO
WGNO

Troopers remind pedestrians to make themselves visible to drivers by wearing bright/light-colored clothing and reflective materials.
HOUMA, LA・1 DAY AGO

Woman arrested, accused of driving while under the influence with kids in the car

According to the Washington Parish Sheriff's Office Facebook page, 34-year-old Megan C. Cooper was found with drugs in her vehicle after getting pulled over for driving erratically.
WASHINGTON PARISH, LA・1 DAY AGO
WGNO

Drivers are encouraged to find an alternate route as three lanes are closed due to the investigation.
NEW ORLEANS, LA・1 DAY AGO
WGNO

After traveling off the roadway, the Toyota struck a utility pole and then became fully engulfed in flames according to LSP.
SLIDELL, LA・2 DAYS AGO
WGNO

Kenner PD preps for National Night Out kick off

Preparations are underway as the Kenner Police Department gears up for a kick-off event for National Night Out.
KENNER, LA・11 HOURS AGO
WGNO

A woman has been arrested in connection to the death of Jairen Cole, a 15-year-old boy who was shot several times a Lafourche Parish home earlier this month.
LAFOURCHE PARISH, LA・1 DAY AGO
WGNO

Three in custody after 20,000 gallons of oil leaked into St. Bernard Parish bayou

Three people have been arrested in connection to an oil spill at an Entergy substation that dumped thousands of gallons of oil into a St. Bernard Parish bayou earlier this week.
ARABI, LA・2 DAYS AGO
WGNO

According to the Jefferson Parish Sheriff's Office, the incident happened in the 3200 block of Wall Boulevard.
GRETNA, LA・2 DAYS AGO
WGNO

New Orleans City Council is considering a new ordinance to hold slumlords accountable. It aims to protect the health and safety of renters.
NEW ORLEANS, LA・2 DAYS AGO