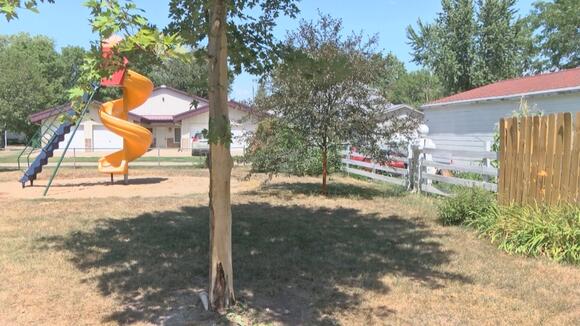 AKRON, Iowa (KCAU) — A park in Akron that was bulit in memory of two boys who died has been vandalized.

The Childrens Memorial Park located at 301 Iowa Street in Akron was built in 2004 to remember the lives of Kyle Nilson, 5, and his brother Kole Nilson, 3, who both died in a house fire where the park now stands.

According to the Akron Police Department, someone ripped the bark and branches off two of the trees on the property around 8 p.m. on Monday.

Officers are still looking for the suspect and asking anyone with information to contact the Akron Police Department at 712-568-2648.

A heroic firefighter gave his life saving others in the 9/11 tragedy and in late 2010's, a 5K walk was started in Siouxland to honor his life.
SOUTH SIOUX CITY, NE・12 HOURS AGO
KCAU 9 News

In the upcoming election, registered Sioux Falls voters will vote on whether new slaughterhouses are banned from being built and permitted to operate inside the city limits of Sioux Falls.
SIOUX FALLS, SD・18 HOURS AGO
KCAU 9 News

The NTSB has released its preliminary report on the deadly gyrocopter crash near Yankton.
YANKTON, SD・14 HOURS AGO

On the first Thursday of October, Safe Place held a vigil and read the names of 13 people who lost their lives in the state of Iowa due to domestic violence.
SIOUX CITY, IA・8 HOURS AGO
KCAU 9 News

In February 2022 Armando Silva Reyes, 55, of Spencer, Iowa, pleaded guilty to one count of conspiracy to distribute methamphetamine and two counts of possession with intent to distribute.
SPENCER, IA・2 DAYS AGO
KCAU 9 News

A man who was accused of threatening a woman with a gun in Sioux City has entered his plea and will be going to trial.
SIOUX CITY, IA・1 DAY AGO
KCAU 9 News

On Wednesday, Tyson Foods announced the employees at the company's corporate office in Dakota Dunes will be relocated to Arkansas.
DAKOTA DUNES, SD・9 HOURS AGO
KCAU 9 News

Preparing your plants for the cold weather

As the weather starts to get colder, Siouxlanders with plants are looking to save their flowery friends.
SIOUX CITY, IA・9 HOURS AGO

It was a big day for the Sioux City Bandits organization as the team announced a series of moves at their press conference, highlighted by a change in the front office as a familiar face will take the reigns of the team.
SIOUX CITY, IA・2 DAYS AGO
KCAU 9 News

It's a question asked whenever a person renews their drivers license: Are you an organ donor?
SIOUX CITY, IA・2 DAYS AGO
KCAU 9 News

Despite glitch, Siouxland Big Give raised over $190,000

After offering tours in apartments and hotels the past two years, Big Brothers Big Sisters is returning its tour of homes event to Siouxland homes.
SIOUX CITY, IA・2 DAYS AGO
KCAU 9 News

SIOUX FALLS, S.D. (KELO) — A 62-year old man is in the Minnehaha County jail facing rape charges.  Ricky Houck is accused of 2nd and 3rd degree rape, along with three counts of sexual contact with a person incapable of consenting.  Houck was arrested last Wednesday on a warrant.  The crimes allegedly took place between […]
MINNEHAHA COUNTY, SD・18 HOURS AGO
KCAU 9 News

Yankton is home to the largest archery center in the world. All the more reason to host a big tournament this week.
YANKTON, SD・22 HOURS AGO
KCAU 9 News

For the ninth straight year, businesses of the United Center came together to bring awareness to the United Way of Siouxland's mission of improving lives by uniting community.
SIOUX CITY, IA・13 HOURS AGO