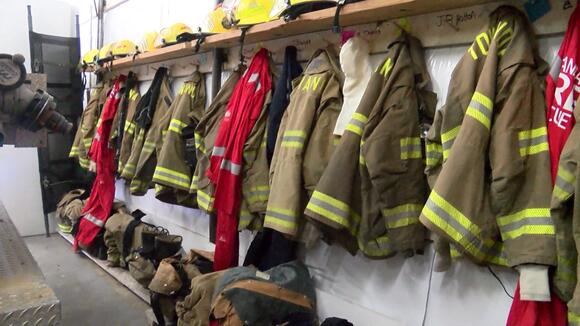 TOWANDA, Kan. (KSNW) – Tight quarters. A Kansas fire chief said his department needs more space. Right now, there is not enough room for the fleet. He said it could impact how fast crews respond to an emergency.

The inside of the Towanda Fire Station is currently like a game of Tetris, with several vehicles unable to fit inside. The fire chief said this isn’t ideal, and a new station would provide more support to the community.

The current Towanda fire station was built in the 1970s. It now holds five vehicles inside with two overflow vehicles outside.

“It’s difficult to open two adjacent truck doors at the same time because they bang. It’s difficult to get people through the aisles. Everybody’s got to be moving the same direction,” said Towanda Fire Chief Tom Pyle.

Chief Pyle is hoping for a new facility that would also add more services to the town of about 1,500.

“We’re also looking at things like perhaps an ambulance bay in the fire station. If we had an ambulance here in town, and we have quite a few medical calls in our small town, that would improve response times to our citizens,” said Chief Pyle.

The mayor of Towanda and the city administrator both agree upgrades are necessary. They said they are currently looking for a new location for the fire dept.

“The guys do a great job with what they have, and we will just see. You know, I hope that we get to grow the department more and at this point, we’re exploring options,” said Andy Newrey, the City Administrator.

Chief Pyle said a new station could also be a storm shelter for the town, host events for the community and be a place locals can check their blood pressure and heart rate. He said if plans move forward, this will likely become a bond vote in a future election.

NEWTON, Kan. (KSNW) — Monday marked a much more quiet but somber day at the Fox Meadows apartment complex. According to the City of Newton, 15 residents of the fourplex were displaced as a result of a devastating fire Sunday. However, due to safety concerns, only two units were deemed safe enough to enter in […]
NEWTON, KS・16 HOURS AGO
KSN News

A fire on the west side of Newton Sunday sent one man in critical condition to the hospital.
1 DAY AGO
KSN News

A 49-year-old Winfield man died when his Jeep crashed a couple of miles south of Winfield Tuesday.
WINFIELD, KS・4 HOURS AGO

WICHITA, Kan. (KSNW) — A Wichita firefighter who had been battling cancer since 2018 has died. Curt Mohr officially retired on September 7 after 28 years with the Wichita Fire Department. The department says that in 2018, Mohr was diagnosed with an aggressive cancerous brain tumor. He spent his final assignment with the department at […]
WICHITA, KS・1 HOUR AGO
KSN News

WICHITA, Kan. (KSNW) — Towne East Square Mall is hosting a job fair. The job fair will take place at the mall, 7700 E Kellogg Dr, on Wednesday, Sept. 28. from 3 to 7 p.m. The mall is hoping to fill a variety of more than 50 available positions at more than 20 retailers. Retailers […]
WICHITA, KS・22 HOURS AGO
KSN News

The free air show at McConnell Air Force Base appears to have been a big success this past weekend.
MCCONNELL AFB, KS・1 DAY AGO

WICHITA, Kan. (KSNW) — It’s been four years since you could visit McConnell Air Force Base for the big air show, but now the show is back. Saturday and Sunday, the free show is from 9:30 a.m. to 5 p.m. Hundreds of people came out on Saturday and braved the heat to enjoy the show, […]
MCCONNELL AFB, KS・2 DAYS AGO
KSN News

Donkey shot and killed in Haysville, owner looking for answers

A beloved pet donkey was shot and killed while in a pasture in Haysville. Now, the owner is looking for answers.
HAYSVILLE, KS・1 DAY AGO
KSN News

Police: Victims say they were shot at in Wichita park

Wichita police are on the scene of a shooting in the 2200 block of S. Market, near Blake Street.
WICHITA, KS・23 HOURS AGO
KSN News

Hutchinson brewery no longer on the brink of closing

HUTCHINSON, Kan. (KSNW) — On Wednesday, Sept. 21, KSN introduced you to Sandhills Brewing, a brewery located in Hutchinson that was on the brink of closing. On Saturday, Sept. 21, they announced that with help of the community, that is no longer true: It is official, we have reached and surpassed the 30% food sales requirement. This […]
HUTCHINSON, KS・2 DAYS AGO

The City of Wichita is hosting a media briefing at 3 p.m. on Monday, Sept. 26, in regard to the Wichita Police Department's property and evidence operations.
WICHITA, KS・1 DAY AGO
KSN News

What changes have been made since the death of Cedric Lofton

One year ago today, 17-year-old Cedric Lofton's death would echo through Wichita, Sedgwick County and the nation.
WICHITA, KS・1 DAY AGO
KSN News

Recovering from an unhealthy addiction can sometimes bring a person to healthy habits.
WICHITA, KS・1 DAY AGO
KSN News

Hutchinson is making waves in the recovery community. New Beginnings is a community development organization that started as a homeless shelter 30 years ago.
HUTCHINSON, KS・1 DAY AGO

Wichita man arrested for stabbing another man over 30 times

A man from Wichita has been arrested by the Wichita Police Department (WPD) after stabbing another man over 30 times.
WICHITA, KS・1 DAY AGO
KSN News

In May, Shane Gaskill pled guilty to one count of wire fraud. On Monday, a judge sentenced him to 18 months in prison.
WICHITA, KS・23 HOURS AGO
KSN News

Wichita State University's Cessna Stadium is getting a makeover.
WICHITA, KS・7 HOURS AGO