Ursuline reloaded for another shot at a state title 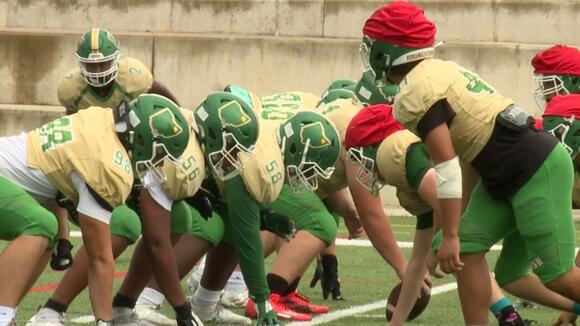 Now a new group of seniors are ready to lead this program as they have their eyes on Canton.

“It was terrible,” says senior wideout Will Burney. “It stuck with me for a good couple months, not going to lie.”

2021 ended in heartbreak for Ursuline. A last-second loss to Clinton-Massie on a two-point conversion in the Division 4 state championship, leaving the Irish as runners-up.

“That disappointment with how that last game ended lingered and served as a motivating factor for all the kids,” head coach Dan Reardon says. “Just taking that last step, that last and final step has kind of been the mantra of this off-season.”

“Huge motivation to get back to where we were,” senior lineman Brain Frasco says. “We know how it feels to get there now, we have some experience coming back, so we feel like we can get there again.”

Reardon and the Irish not only must replace Shannon, but two of the BEST weapons to come thru Ursuline in running back DeMarcus McElroy and Dean Boyd.

“We are not going to replace those guys,” says Reardon. “They were some of the best to ever do it in the green and gold. We have some good young skill coming up and it is going to be by committee. We are replacing a lot of production on the offensive side there is not one guy that is going to do it, it is going to be a number of guys.”

Two of those guys will be Marc Manning and Will Burney. The two combined for over 1000 receiving yards and 12 touchdowns a year ago.

“We want to break all the records that they broke last year just keep the trend going with everyone else,” says Manning, a senior wideout. “We have to put twice the work in,” Burney says. “We have to put the work in, can’t get complacent. We have to do good things, right things, little things to take that step.”

Ursuline also welcomes former Liberty standout D.C. Ferrell to the offense. He accounted for 21 touchdowns last season and is opening some eyes on the North Side.

“He added some explosiveness. He is just really twitchy, fast,” says Burney.

“He is insane,” Manning says. “Something I have never seen before, it is crazy.”

Even though the expectations are extremely high once again for Ursuline, they say if they make a return to Canton, they have to put the work in.

“You win games Monday thru Thursday. Friday is a fun day, it is payday,” says Burney.

Week 3 of the Ohio High School Volleyball Coaches Association poll was released, with a handful of local schools included in the rankings.
YOUNGSTOWN, OH・22 HOURS AGO
WKBN

Last May, Toth tossed a perfect game in the Division II Sectional Final over Geneva, striking out 13 in 5 innings.
CANFIELD, OH・22 HOURS AGO
WKBN

A huge Saturday night matchup lived up to the hype, with Ursuline edging out previously unbeaten Chaney 23-20.
YOUNGSTOWN, OH・2 DAYS AGO
WKBN

PA powers collide on Friday’s Game of the Week

With the win, the Purple Raiders improve to 3-0 and will travel to Ohio Northern next week for a 1:30PM kickoff
ALLIANCE, OH・2 DAYS AGO
WKBN

On the offensive end, Simeir Wade led the way at quarterback, adding a rushing and passing touchdown.
HERMITAGE, PA・2 DAYS AGO
WKBN

Warren JFK athletic director Al Gregos has announced that the Eagles will play all of their remaining home football games at Liberty this Fall.
WARREN, OH・3 DAYS AGO
WKBN

WASHINGTON, Ohio (WKBN) - The U.S. Department of Education has designated 13 schools across Ohio as 2022 National Blue Ribbon Schools, and two Valley schools made the list.
CANFIELD, OH・1 DAY AGO

Family of student hazed to death speaks at YSU

The parents and sister of Stone Foltz travel to spread the word about the dangers of hazing. Monday night, they spoke at Youngstown State University.
YOUNGSTOWN, OH・17 HOURS AGO
WKBN

With the win, Farrell improves to 4-1 while Hickory drops to 2-3
FARRELL, PA・2 DAYS AGO
WKBN

Melissa Kmetz, a third-grade teacher at Lakeview Elementary School in Cortland was honored by her school Tuesday after receiving the statewide honor.
CORTLAND, OH・4 HOURS AGO
WKBN

Have any old instruments just lying around the house?
AUSTINTOWN, OH・1 DAY AGO
WKBN

Winning for Winnie is a two-day fundraiser for 2-year-old Winnie Vollnogle who was told she had leukemia last month.
COLUMBIANA, OH・17 HOURS AGO
WKBN