More than 4,000 beagles raised to be used in US drug trials were rescued from a breeding facility in Virginia 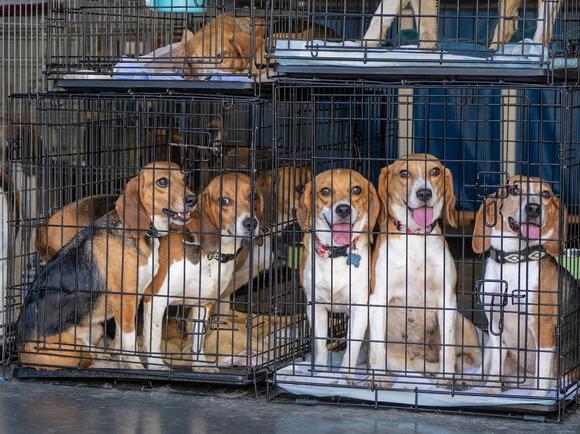 More than 4,000 beagles were saved from a breeding facility in Virginia, which would have sold the dogs to laboratories for US drug experiments, Reuters reported.

Animal rescue organizations are working to remove the thousands of beagles from the facility in Cumberland County, Virginia, which was supposed to be shut down due to alleged animal rights violations.

In May, the company that owned the facility, Envigo RMS, was sued by the Department of Justice, which accused the company of animal cruelty after inspectors found that some dogs were being killed instead of given veterinary care, according to a report by BBC , and at least 25 dogs died in the facility due to cold exposure.

Inspectors also reported that the dogs were being fed food covered in maggots, mold, and feces, and some dogs who were nursing were denied food at all, BBC reported.

Envigo RMS denied the allegations, but its parent company Inotiv Inc ordered Envigo RMS to close the Cumberland breeding facility in June, according to Reuters. In July, Envigo RMS reached a settlement with the government without paying any fines, and the DOJ announced the transfer of the dogs to get them treatment and put them up for adoption.

"It's going to take 60 days to get all of these animals out" and to work with shelters and rescue partners to find adoptive families, Kitty Block, president and chief executive of the US Humane Society, told Reuters.

The beagles were sent to adoption centers across the US, from Chino Hills, California; to Elgin, Illinois; to Pittsburgh, Pennsylvania.

Beagles are one of the most common dog breeds used for pharmaceutical trials because they are small and docile, according to the American Anti-Vivisection Society , an organization that advocates against drug trials on animals.

"The most common breed of dog used for experiments are beagles, but not because scientists view them as the best model for human disease," according to the organization's website. "Rather, beagles are convenient to use because they are docile and small, allowing for more animals to be housed and cared for using less space and money."

Alright I'll say it... Why are we just shaming the breeders? It's our government that is testing on them! They wouldn't sell them to people for testing if testing wasn't being done. It's that simple! They test on us.. so, testing on a dog is not far off from a no they wouldn't. They are ruthless. These poor dogs. Now, I'm wondering why there's no links of you wanted to adopt.

Imagine a dog with a human face, yes a human face. This is not something you see every day. The world of dog breeds is a fascinating one. The variety of dogs we see in pet stores, on our streets and even in our homes is astounding.
1 DAY AGO
Insider

My mom moved me to the US when I was 7 years old. Now, 21 years later I decided to move back to Colombia and my quality of life is much better.

The author's mom left Colombia for the US searching for a safer place for her four children to grow up. Now he has moved back for a better life.
FAMILY RELATIONSHIPS・2 DAYS AGO
USA TODAY

Katharine McClain said her husband John McClain found the baby in a shed at their home and wrapped her in a towel before an ambulance arrived.
LIVINGSTON, TX・1 DAY AGO
WashingtonExaminer

A Wyoming man reportedly died in jail 19 days into his stay that was filled beatings that resulted in black eyes and broken ribs, his family alleges

Alvis Shrewsbury was the fifth person in a year to die while in custody at the Southern Regional Jail in Raleigh County, Wyoming, per local news.
RALEIGH COUNTY, WV・2 DAYS AGO
Insider

A woman is raising the alarm for what she says is her brother's 'deteriorating' health while in an Alabama prison, saying that he looks 'extremely malnourished'

The Vaughan family released harrowing images of Kastellio Vaughan, whose family says is not receiving the proper medical treatment in prison.
ALABAMA STATE・3 DAYS AGO
Insider

A Mississippi man was charged for burning a cross and using 'threatening and racially derogatory remarks' against Black neighbors, DOJ says

The DOJ said Axel C. Cox, 23, burned the cross at his Gulfport, Mississippi home in 2020 to intimidate his Black neighbors.
MISSISSIPPI STATE・2 DAYS AGO
Insider

Large sinkholes in Guatemala leave at least 3 injured and 2 missing. Here are the sinkholes, manmade and natural, that opened up around the world.

Two massive sinkholes opened up in Villa Nueva, Guatemala, on Saturday, Reuters reported. Rescuers are searching for a mother and daughter.
PUBLIC SAFETY・1 DAY AGO

Animal rescuers in Massachusetts came to the assistance of a raccoon spotted wandering with a peanut butter jar stuck over its head.
BARNSTABLE, MA・13 MINUTES AGO
The Hill

Farmers in this country have never had it easy. I think back to my grandmother, a tough immigrant from Slovakia who settled in the Midwest and endured hard conditions as a tenant farmer in Illinois and Wisconsin. Battling through the Depression, there were periods without water and without electricity. Once, she watched her farm burn down. Still, she and countless other small farmers toiled to make it work, and we — everybody who relies on our food system — are their beneficiaries.
AGRICULTURE・14 MINUTES AGO
POLITICO

Dems light up airwaves in key secretary of state races

Officials stressed that it was important to heed evacuation orders to save lives and to avoid having to send rescue teams in.
FLORIDA STATE・4 HOURS AGO

The 5 best medicated shampoos for dogs, according to veterinarians

If you're looking for a shampoo to treat bacterial and fungal infections, allergies, or fleas and ticks, these are the best medicated dog shampoos.
PET SERVICES・4 HOURS AGO
Insider

For a healthier environment, plant a native garden — no matter how big, says the famed entomologist Doug Tallamy

Nature's not optional, and gardening isn't just for tree huggers. "It's not because we like nature. It's because we need it," Doug Tallamy says.
VERMONT STATE・3 HOURS AGO