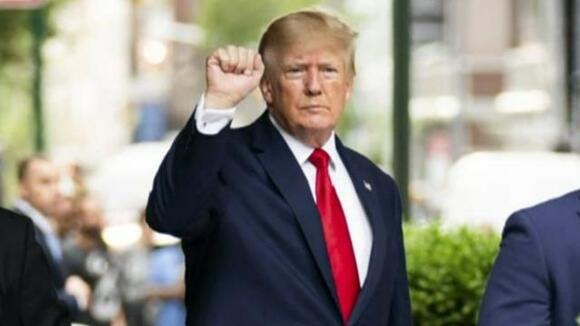 Noted local defense attorney Tim Dawson said a common misconception about the Fifth Amendment is that it's a way to cover yourself if you're guilty. But the founding fathers put it into the Constitution to protect Americans from the government potentially twisting a person's words against them in civil and criminal proceedings.

Former President Donald Trump walked out of his deposition regarding questions over the former chief executive's property valuations on loan applications and tax issues. However, the president said he pleaded the Fifth to every question asked by the New York attorney general's staff.

"If you are in a situation where innocent or guilty, and you make statements that might be deemed incriminating, you have the right not to testify against yourself," Dawson said.

"It's the right move because anyone questioning you isn't there to help you. They're there to build a case against you," Dawson said.

But for one man KDKA's Ross Guidotti spoke to, he said Trump invoking the Fifth Amendment is ironic.

"What I recall back in 2015 and 2016, he said if you plead the Fifth, that means you did," said William Bechtold from Greensburg. "It's kinda curious he pleads the Fifth on everything."

Jessica Skacel, a cattle farmer from Dairy said the former president deserves no special treatment, he deserves equal protection under the law as any other citizen would.

"He was a great president, he did a lot for us," she said.

Dawson said the former president pleading the Fifth also prevents other prosecutors, federal and state, from harvesting testimony for any and all cases against him.

President Joe Biden surprised viewers Friday when pausing his speech to acknowledge a woman in the crowd he said he knew when she was 12. “You gotta say hi to me,” Biden said during a speech at the National Education Association headquarters in Washington, D.C. “We go back a long way. She was 12 — I was 30. But anyway, this woman helped me get an awful lot done.”
WASHINGTON, DC・2 DAYS AGO
CBS Pittsburgh

PITTSBURGH (KDKA) -- A woman from Mercer County who has been charged in the January 6 riots at the U.S. Capitol will have to wear GPS monitoring until her trial.The Post-Gazette reports that a judge granted the government's request for the monitoring.The U.S. Attorney's Office says Rachel Powell has repeatedly violated the conditions of her release.Powell is accused of smashing a window at the Capitol with a pipe and yelling instructions to other rioters.
MERCER COUNTY, PA・2 DAYS AGO
CBS Pittsburgh

Woman sentenced to life in fire that killed parents

PARKERSBURG, W.Va. (AP) — A West Virginia woman who set a fire that killed her parents three years ago when she was 16 has been sentenced to life, but will be eligible for parole in 15 years.Madison Wine received the sentence Thursday in Wood County Circuit Court, the Parkersburg News and Sentinel reported. She was charged as an adult with murder, attempted murder, arson and cruelty to animals in the May 2019 fire that killed Robert and Charolette Taylor, injured a 6-year-old and killed dogs in their Davisville home.Wine read a statement in court saying her actions weren't intentional and she "didn't mean for any of this to happen."Roane County Prosecutor Josh Downey was appointed to represent the state and said that Wine's age at the time of the offense meant she would be eligible for parole in 15 years, regardless of the sentence.
PARKERSBURG, WV・2 DAYS AGO
CBS Pittsburgh

(CNN) — The threatening letters began in March 2007.They came in the mail to Eva LaRue's Southern California house -- sometimes handwritten, sometimes typed -- from an unknown sender who called himself "Freddie Krueger" and vowed to rape and kill her and her young daughter.The letters -- more than three dozen of them -- kept on coming for more than 12 years, a relentless psychological assault that made the "CSI: Miami" actress and her family afraid to step outside their home.Early on, some letters mentioned LaRue's daughter, then 5. But in 2015, letters began arriving addressed to the child. The...
PUBLIC SAFETY・1 DAY AGO

PITTSBURGH (KDKA) — The Pittsburgh police union has rejected the city's final contract offer.According to the Tribune-Review, the case now heads to arbitration.The offer included raises that Mayor Ed Gainey said would make their pay more competitive with other regions. The Pittsburgh Bureau of Police has been struggling to attract and retain officers over the past couple of years.Gainey said he's disappointed the union turned down the offer.
PITTSBURGH, PA・2 DAYS AGO
CBS Pittsburgh

CHARLESTON, W.Va. (AP) — Walmart and CVS Pharmacy have settled with the state of West Virginia for a combined total of $147 million in a lawsuit over the companies' roles in contributing to the oversupply of prescription drugs that fueled the opioid epidemic in the country's most impacted state, Attorney General Patrick Morrisey announced Tuesday.Walmart and CVS were two lawsuits that were part of a larger trial that was pushed back to June of next year along with Kroger and Walgreens. Morrisey recently announced a settlement with Rite Aid for up to $30 million to resolve similar litigation.The lawsuits allege...
ECONOMY・4 DAYS AGO
CBS Pittsburgh

MONONGAHELA, Pa. (AP) - House Republican leader Kevin McCarthy on Friday confronted President Joe Biden and the Democratic majority in Congress with a sweeping midterm election agenda filled with Trump-like promises, hoping not only to defeat Democrats but to hold together the uneasy coalition of his own party and pass actual legislation. McCarthy, who is poised to seize the speaker's gavel if Republicans win control of the House in the fall, hopes to replicate the strategy that former Speaker Newt Gingrich of Georgia used to spark voter enthusiasm and gain a majority in 1994. Victories in battleground Pennsylvania, where McCarthy...
PENNSYLVANIA STATE・2 DAYS AGO

MORGANTOWN, W.Va. (AP) — A West Virginia circuit judge is retiring at the end of the year.Judge Phillip D. Gaujot will retire from the 17th Judicial Circuit, which covers Monongalia County, on Dec. 31, the Supreme Court said.Then-Gov. Joe Manchin appointed Gaujot to the bench in 2009, and he was elected in 2012 and reelected in 2016.Gaujot graduated from West Virginia University in 1968 and received his law degree from WVU College of Law in 1971. He began practicing as an assistant attorney general, and was in private practice from 1974 until his appointment to the bench.
MONONGALIA COUNTY, WV・1 DAY AGO