BIN: Black Information Network is the first and only 24x7 comprehensive national audio Black News service dedicated to providing an objective, accurate and trusted source of continual news coverage with a Black voice and perspective. 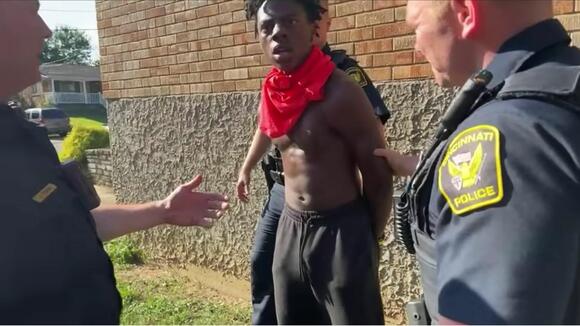 A shocking video shows a popular Black streamer getting handcuffed and swatted during a livestream.

IShowSpeed , who has over 10 million subscribers on YouTube, was handcuffed by Cincinnati police officers in a viral video posted to his channel on Monday (August 8).

As authorities start questioning the YouTuber , one of the cops comes over and escorts the cameraman away from the scene. The clip shows the officer placing his hand over the camera lens. There's a short conversation before the stream is shut down.

Swatting is when someone calls 911 with a fake report in an attempt to send authorities to another person's home. These situations put victims in real danger and have even led to deaths. A 28-year-old man died from a false report about a hostage situation at his home in 2017. The swatter was sentenced to 20 years in prison over a year later.

Some online onlookers believe the swatting was staged or fake due to a clip of IShowSpeed calling 911 before the incident. In the clip, Speed can be heard dialing the number, and the person on the line simply responds, "Yo," indicating that it wasn't a real dispatcher. Others say the incidents are unrelated and coincidental at best.

Adin Ross , a popular Twitch streamer who was also swatted on Sunday (August 7), confirmed Speed was swatted and is doing "okay" in a video posted to Twitter .

“It’s a sick, cruel world we live in, man," he says, talking about both swatting incidents. "I just got off the phone with Speed, and he’s doing good… It’s sickening.”

IShowSpeed, whose real name is Darren Watkins Jr. , rapidly gained viewers within a few years thanks to his off-the-wall hijinks and personality during gaming streams. He recently went viral for lighting up fireworks in his bedroom, prompting a call to his local fire department.

Speed himself has yet to comment on the situation.

Get the latest news 24/7 on The Black Information Network. Listen now on the iHeartRadio app or click HERE to tune in live.

Before getting aggressive with police, the suspect reportedly called a teenage cashier a racial slur, according to cops.
SOUTH MIAMI, FL・1 DAY AGO
BIN: Black Information Network

Bus Driver Shoved 2 Black Kids Who He Told To 'Sit In The Back', Mom Says

A Georgia bus driver has been fired, arrested, and charged after a video surfaced of him pushing two young students in what their parents believe was a racially-motivated attack.
MORGAN COUNTY, GA・15 DAYS AGO
BIN: Black Information Network

Bishop Lamar Whitehead, who was previously robbed of over $1 million worth of jewelry, appeared to get physical with a woman after she seemingly interrupted his sermon.
BROOKLYN, NY・17 DAYS AGO

Sophia Wilson, Ebon Gore, Caleb McLaughlin, and Steve Toussaint are among the Black actors who are opening up about the racism they face from fans and online.
CELEBRITIES・23 HOURS AGO
BIN: Black Information Network

As Netflix's new series 'Monster: The Jeffrey Dahmer Story' rises in popularity, Boosie BadAzz is calling for the streamer to take down the show and urging Black people to stop watching.
TV & VIDEOS・5 DAYS AGO

BIN: Black Information Network is the first and only 24x7 comprehensive national audio Black News service dedicated to providing an objective, accurate and trusted source of continual news coverage with a Black voice and perspective.