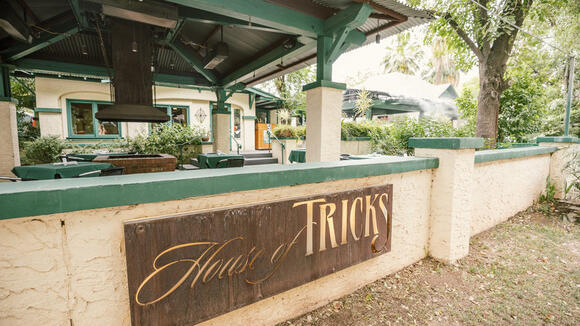 The Tempe restaurant scene lost one of its biggest names in late June when House of Tricks closed its doors for the last time after 34 years.

Owners Bob and Robin Trick had previously announced their plans to retire back in December 2021.

“ Knowing what House of Tricks means to us, and to so many in our community, has made this decision especially difficult. It's always hard to leave a business that you love and that has been so much a part of our lives and yours for over three decades,” the two said in a Facebook post announcing the news.

About a month later, The Vine Tavern & Eatery near the Arizona State University campus joined House of Tricks in shuttering. The bar had been open to generations of college students since 1986. However, another Tempe location of the sports bar still stands, and a new location in Ahwatukee is set to open imminently at 3820 E. Ray Road.

The closure of the longstanding community favorites seem to be part of a pattern, following in the footsteps of other recent restaurant losses. Vegan restaurant 24 Carrots closed in December after 13 years, Hong Kong Asian Diner closed back in March after opening in 2003 and  P.F. Chang’s just closed its Mill Avenue location after 24 years in downtown Tempe.

Steve Chucri, president and CEO of the Arizona Restaurant Association, said turnover is common in the restaurant industry and owners need to do a better job of staying current.

“The average lifespan of a restaurant is about 20 years. So if you take two steps back and you look at it from a more general context, you'll see okay, why does Applebee's change their look and feel? Why is Chili's re-skinning some other stuff? Because you have to do that in this industry, not to stay necessarily relevant, but in order to continue to attract new customers and maintain your current customers. Independent restaurateurs are oftentimes, as we like to call them in the industry, the cornerstone of our communities, whereby they are the rock.”

While Chucri said he believes that some businesses simply run their course, the events of the last three years have brought about so many unforeseen issues that have hammered local restaurants.

“We're finding out what COVID-19 was, it was almost a line of demarcation in everyone's life, no matter what your age was,” he said. “Pre-COVID versus post-COVID. “I think now we're finally learning the true effects not only economically. It impacted all of our psyches as well. When you look at it through both the financial lens and the personal human side, it irreparably impacted people.If you take it a step further, from a business standpoint, it will have irreparably impacted our industry. As part of that recovery, many restaurants recovered very, very well and are doing right now better than 2019. Others, it just did such damage that they could never really recover.”

While the House of Tricks owners retired of their own accord, issues like inflation, supply chain, labor shortages make running a restaurant difficult, he said. When costs rise, “discretionary spending” is the first to go from a household budget, leaving restaurants vulnerable.

But with Arizona growing, particularly Maricopa County, at an astronomical rate, the dining industry has some hope.

“The good news is our community here in Arizona as a state, we're fast growing,” said Chucri. “That demand is still there by virtue of population growth.”

Colin Diaz, president and CEO of the Tempe Chamber of Commerce, said the chamber and city officials are doing their best to ensure restaurants can still thrive in the midst of a perfect storm.

“[The chamber does] a number of different things from marketing for restaurants, for our events we will utilize restaurants to cater,” he said. “But we have something that we're going to be starting actually in the next month or two, our cluster meetings. “So we'll be convening restaurateurs as one of our cluster groups where we're going to be speaking to them about the pain points. They have things that are keeping them up at night. And we work regularly with the city of Tempe as well as our local elected officials. So being able to elevate some of those concerns is pretty impactful.”

The Tempe Chamber was also an integral part of passing House Bill 2178, called “Theft by Extortion.” The bill aims to protect small businesses and restaurants from customers threatening them with negative reviews on sites like Yelp or Google unless they are given things for free. The bill carried through both chambers at the Arizona State Capitol and was signed into law by Gov. Doug Ducey. As of Sept. 24, it will be considered a class 4 felony. The Tempe Chamber partnered with the East Valley Chamber of Commerce Alliance and Dorn Policy Group to craft the legislation.

Diaz said reputation has become all the more important for small businesses struggling to stay afloat since the onset of the pandemic, and the new legislation was intended to help them do so.

While he agreed with Chucri on the reasons for the local dining scene’s recent struggles and said the pandemic’s impacts would continue to be felt, even among the industry’s stalwarts, he said Tempe still has so many gems that often go unnoticed. He named Ghost Ranch, The Peppermill and Caffe Boa as long-time favorites that are still open in town. The Chuckbox near ASU just celebrated its 50th anniversary.

“Others in south Tempe don’t get as much shine as they should,” he said. “Like in most cities, the downtown area is going to be the draw on what's recognized and that is understandable, but there are definitely ones that have a strong following in South Tempe and other parts of the city as well.”