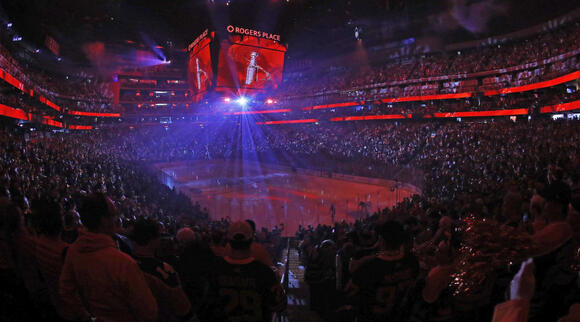 The 6-year-old spent the Oilers’ playoff run with the team.

Oilers superfan Ben Stelter, who became popular in the spring for inspiring Edmonton through its playoff run, died Wednesday, his father announced .

Stelter, who was 6 years old, was diagnosed with glioblastoma less than two years ago. He underwent multiple surgeries to remove a tumor from his brain as well as four rounds of chemotherapy.

On March 25, the Oilers invited Stelter inside the locker room before their game vs. San Jose. Stelter also appeared onto the ice during the game, and he attended the postgame press conference. Edmonton won the game, and credited Stelter for being the team’s good luck charm.

Edmonton invited Stelter back for the playoffs as the Oilers advanced to the Western Conference finals for the first time since 2006.

After Oilers playoff wins, Stelter became most known for saying “Play La Bamba,” which was the song that Edmonton played after wins .

“Ben came into all of our lives at a time when we needed some hope and inspiration. Although small in stature, Ben’s impact on our team and community were massive,” the Oilers said in a statement . “At a time when he was going through his own struggles with his illness, he and his family gave us their time and their friendship, allowing to get to know Ben and be touched by his charm, his courage and his infectious giggle”

I am so sorry for the loss of your child. Rest In Peace little one! Condolences and Prayers for family and friends 🙏🙏My husband lost his battle in 2020! It just isn’t the same as losing a child. I can’t even imagine fighting along beside him and then losing him… God Bless All..

The 33-year-old defensive end revealed he had his heart shocked back into rhythm earlier this week.
SAINT LOUIS, MO・19 HOURS AGO
The Detroit Free Press

Detroit Tigers Newsletter: How the Tigers are about to become MLB's longest sufferers

There is a strong chance that by the end of Monday’s action, as we enter an abbreviated final week of the 2022 MLB season, the Detroit Tigers will have the majors’ longest active postseason drought. “But wait,” you’re saying, “they just made the playoffs in … hmmm … I could have sworn it was just four or five seasons ago … Look, Miggy was around back then, and now, and I just saw Jim Leyland on TV...
DETROIT, MI・20 MINUTES AGO
Sports Illustrated

The London goalpost was unforgiving for New Orleans kicker Will Lutz.
NEW ORLEANS, LA・18 HOURS AGO