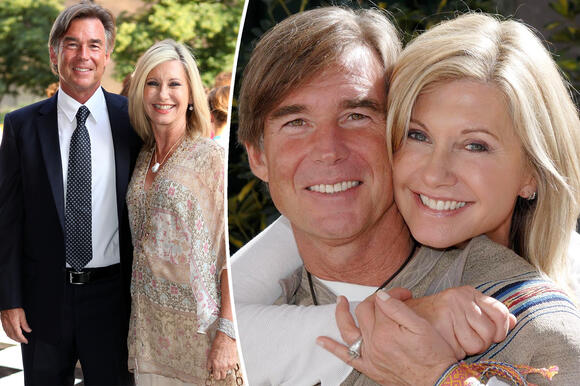 John Easterling described his love for late wife Olivia Newton-John and praised her “courageous” spirit in an emotional tribute to the “Grease” actress.

“Olivia, our love for each other transcends our understanding,” he wrote on Instagram Wednesday, two days after she died at age 73 following a long battle with breast cancer

“Every day we expressed our gratitude for this love that could be so deep, so real, so natural. We never had to ‘work’ on it. We were in awe of this great mystery and accepted the experience of our love as past, present and forever,” he continued alongside a picture of him and Newton-John.

He then spoke about her “essence” and how his late wife was a “healer” through her songs, words and touch.

“She was the most courageous woman I’ve ever known,” the 70-year-old wrote. “Her bandwidth for genuinely caring for people, for nature and all creatures almost eclipses what is humanely possible.

“It is only the grace of God that has allowed me to share the depth and passion of her being for so long. In her most difficult times she always had the spirit, the humor, and the will power to move things into the light.”

“Even now as her soul soars, the pain and holes in my heart are healed with the joy of her love and the light that shines forward,” he concluded before thanking everyone for their “love and support.”

The couple got married in 2008, nearly a decade before the singer learned her breast cancer had returned and metastasized to her sacrum.

According to her niece, Totti Goldsmith, the actress’s death “was not a shock” to her family as she had “really struggled with a lot of pain” in her final days.

The “Physical” singer was “surrounded by family and friends” when she passed at her Ranch in Southern California.

The daughter of a star from The Sopranos has tragically died, just three months after giving birth to a baby girl. Odele Ventimiglia, the daughter of actor John Ventimiglia, passed away on 12 January with a cause of death not yet confirmed publicly. The sad news was confirmed by family...
1 DAY AGO
OK! Magazine

Nearly two weeks after Lisa Marie Presley's sudden passing on January 12, ex-husband Michael Lockwood — the father of her 14-year-old twins, Finley and Harper — filed docs to try and find out how the singer's assets will be divvied up.According to Radar, Lockwood's attorney notified the court of the death and said, "We do not currently know the intended Executors and Trustees that the late Lisa Marie Presley had named.”Lockwood's confusion doesn't come as much of a surprise given he and the late star were in an ongoing divorce battle over monthly child support payments, though they eventually came...
2 DAYS AGO
Page Six

Nadya Suleman’s octuplets are 14! “Octomom” celebrated Noah, Maliyah, Isaiah, Nariyah, Jonah, Makai, Josiah and Jeremiah’s birthday on Wednesday with vegan donuts, in footage obtained by TMZ. The teenagers were all smiles blowing out candles atop the sweet treats. Suleman, who has yet to honor the milestone via social media, is also the mother of six older children — Elijah, Ameerah, Joshua, Aidan, Calyssa and Caleb. The 47-year-old hasn’t added more members to her family since welcoming the octuplets in January 2009. Suleman hates being known as “Octomom,” telling “The Doctors” audience in 2016 that she “never set out to” become the head of such...
2 DAYS AGO
Page Six

“GMA3” anchors-turned-lovers T.J. Holmes and Amy Robach tried to lay low on a run in Los Angeles after news broke that they’re leaving ABC. The embattled couple wore matching exercise gear and exited the same house within minutes of each other Friday morning but opted to jog in opposite directions, as seen in Page Six’s exclusive photos. Holmes, 45, appeared downcast as he made his way down the sidewalk in a black fitted hoodie, matching compression pants and bright red Nike sneakers. His black-and-gray camo-printed shorts matched 49-year-old Robach’s black-and-gray-speckled leggings, and both made sure to have their ear pods plugged in for...
LOS ANGELES, CA・1 DAY AGO
Page Six

Harry Styles and Ellis Calcutt have a whole lot of history. The “Late Night Talking” crooner, 28, was pictured grabbing coffee and catching up with his rumored former flame in London on Wednesday, two months after his split from Olivia Wilde. The former One Direction singer donned a black North Face jacket with black Nike leggings and a pair of sneakers for the outing. He completed the look with a claw clip in his hair, a tote bag from his beauty line, Pleasing, and a pair of black shades. Calcutt cut a chic figure as she carried a coffee and a sandwich...
3 DAYS AGO
Page Six

Jennifer Aniston attended a Harry Styles concert on Thursday — and witnessed a wardrobe malfunction. While the former One Direction member sang “Music for a Sushi Restaurant” to his Inglewood, Calif., audience, he dropped to his knees and split his pants. After making a shocked face at the crowd, the singer, 28, covered the tear with his hands and good-naturedly rolled his eyes at his bandmates. Styles finished out the performance with a towel hiding the rip. Aniston was far from the only A-list audience member, with Kylie Jenner, Trevor Noah and Ellen DeGeneres also in attendance. However, Twitter users were quick to poke fun...
INGLEWOOD, CA・1 DAY AGO
HuffPost

Presley was jettisoned as a co-trustee from her daughter's Promenade Trust in a 2016 amendment.
LOS ANGELES, CA・18 MINUTES AGO
Page Six

Casey Wilson and David Caspe’s “dreams have come true” now that they’re parents of three. Wilson, 42, announced the arrival of daughter Francis Rose — who was named after the actress’s “best friend of all time” — on Thursday’s episode of her “Bitch Sesh: A Real Housewives Breakdown” podcast. “We now have a baby girl via surrogate,” the “Happy Endings” star shared. “She is here!” “Her name is Francis, but we’re calling her Frankie,” she explained. “So, she’s Frankie Rose Caspe.” Wilson — who already shares sons Max Red, 7, and Henry Bear, 5 with Caspe — revealed she was hoping for a daughter “so badly.” The couple, who tied...
1 DAY AGO
Page Six

She’s coming clean. Hilary Duff admitted she did not tune in to “Laguna Beach” despite her hit single “Come Clean” being the MTV reality show’s theme song. “I was not a huge [fan],” Duff, 35, said on the “Watch What Happens Live with Andy Cohen” aftershow Thursday. “I just … I didn’t watch.” The “How I Met Your Father” star explained that she was in the midst of promoting her music career on the road when the series aired from 2004 to 2006. “In a moment in time when you could not record TV shows, I was on tour,” she said. “So, I missed...
1 DAY AGO
Page Six

Kathy Hilton celebrated the arrival of her new grandson after Paris Hilton and Carter Reum’s surrogate gave birth to a baby boy. “Paris and Carter, we know you are going to be the most amazing parents,” the “Real Housewives of Beverly Hills” star told People on Thursday on behalf of herself and her husband, Rick Hilton. “We are so thrilled for you both!” Kathy, 63, continued. “Thank you for this perfect addition to our ever-growing, beautiful family.” The statement came two days after Paris, 41, debuted her infant via Instagram. “You are already loved beyond words,” the “Simple Life” alum gushed. She and Reum, also...
1 DAY AGO
Page Six

“Friends” star Maggie Wheeler said Matthew Perry’s bombshell memoir was “sad” and “difficult” for her to read. The actress, who memorably played Perry’s on-again, off-again girlfriend Janice on the hit NBC show, exclusively tells Page Six it was hard to read because there were “so many startling revelations about the ways Matthew has suffered over the years trying to wrangle his addictions.” In the book, “Friends, Lovers and the Big Terrible Thing,” Perry revealed that he nearly died several years ago at age 49 when his colon burst from opioid overuse. He spent two weeks in a coma, five months in...
11 HOURS AGO
Page Six

Brad Goreski is telling “RuPaul’s Drag Race” fans to “lighten up” after episodes of the long-running show have been cut down to make room for his new reality series, “The Real Friends of WeHo.” “It’s a new show with a bunch of funny guys who are sharing their lives with you as it rolls out. Like, it’s winter,” the TV personality, 45, says on Page Six’s “Virtual Reali-Tea” podcast.  “Turn on MTV, plop yourself down, watch ‘Drag Race,’ watch us, watch ‘Untucked’ and have a fun Friday night and chill out.” Acolytes of “Drag Race” — which moved to MTV this year after...
1 DAY AGO
Page Six

Rita Ora wears wedding dress in ‘You Only Love Me’ video, confirms marriage

Rita Ora is a bride twice-over. The 32-year-old singer dropped the music video for her newest single, “You Only Love Me,” on Friday — and art is certainly imitating life. Indeed, the music video for her new song has a bridal theme, with Ora dressed in a vintage 1987 Yves Saint Laurent wedding gown as she prepares for her big day. And it turns out she was a real-life bride last year as the star finally confirmed on a British radio show Friday morning that she married filmmaker Taiki Waititi, 47. Appearing on “Heart Radio Breakfast” today, Ora said, “Yes...
1 DAY AGO
Page Six

Celebs and royals alike love Hunter boots: Get them on sale at Amazon

Celebrities aren’t just saving Hunter’s weather-ready boots for a rainy day. Reese Witherspoon, Meghan Markle and Taylor Swift — to name just a few — have all pulled on pairs of the waterproof footwear, rain or shine. And it seems Sarah Jessica Parker can’t help but wonder about the practical styles either, as she was seen trading her stilettos for Hunter Original Adjustable Short Boots (from $109, originally $155) while filming “And Just Like That” in an NYC rainstorm this week. But despite the brand’s many celebrity fans, you won’t need a Hollywood paycheck to pick up a pair; a slew of the...
1 DAY AGO
Page Six

Rita Ora finally confirmed longstanding rumors that she and director Taika Waititi are married. “Yes … I am officially off the market,” the “How We Do (Party)” singer announced during an interview on the UK’s “Heart Breakfast” Friday. “Putting out a new single and it really being inspired by where I’m at in my life, I knew the questions were gonna come,” she said ahead of the release of her wedding-themed “You Only Love Me” music video. Ora explained that she wanted to “play on” the “is she, is she not?” chatter with the video. “I wanted to do a wedding that didn’t really...
1 DAY AGO
Page Six

Save on the Veja sneakers Kate Middleton and Meghan Markle love

Kate Middleton and Meghan Markle might not be swapping lip gloss on the daily, but they do share a love for these shoes. Both royal women are famously fans of Veja’s sustainable sneakers, which are also a hit among Hollywood royalty like Reese Witherspoon and Katie Holmes. And right now, Gilt — which is free to sign up for — has slashed prices on a slew of sneaker styles from the celeb-loved brand, including the all-white version of the popular V-10 Sneakers ($136, originally $165).  The Duchess of Sussex teamed hers with jeans and a windbreaker for the 2018 Invictus Games, where she...
3 DAYS AGO