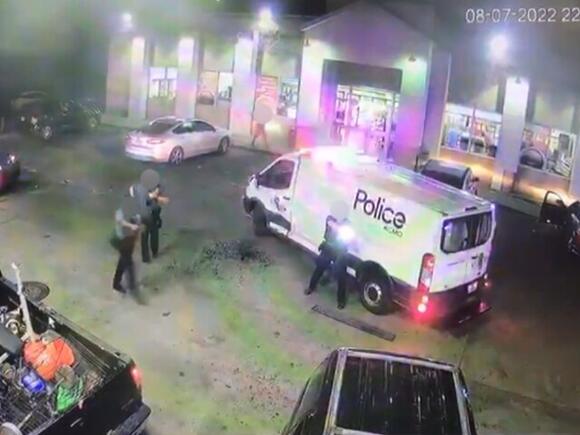 Exclusive video obtained by KSHB 41 News shows the moments leading up to and the immediate aftermath of a police shooting Sunday night at a Kansas City, Missouri, gas station that left a man dead.

Some might find the video disturbing, but we're showing this video because we want to provide viewers will as much information as possible.

We are also blurring out the faces of the officers and witnesses to protect their identities as the Missouri State Highway Patrol investigates.

While the entire video is 47 seconds, it depicts how quickly police interactions can unfold and how each person involved is making split-second decisions.

On the night of the shooting, a spokesperson for MSHP - the lead investigating agency - said KCPD had eyes on a stolen SUV that was parked at a gas station near E. 55th Street and Prospect Avenue.

The man seen getting into the SUV was identified Tuesday as 31-year-old Zach Garrard . Police pulled up behind the SUV as soon as Garrard got in, a police car to the back left and a white police van to the back right.

"They pull over and put lights on him," Adeem Syed, the gas station clerk, told KSHB 41 News. "They might have told him to stop or come out, but he didn't come out and he tried to run away."

We asked Michael Tabman, a retired FBI special agent with 27 years of law enforcement experience, to review the video. He's not involved in the investigation.

"It made it a basically a felony car stop, where they approach the individual, guns drawn, which is their discretion," Tabman said.

The video doesn't have audio, so we can't hear what the officers might have told Garrard. You see Garrard abruptly backs out and puts the SUV in drive, crashing into the police van and appearing to bump the officer next to the van.

Troopers say that's when two of the officers opened fire.

The SUV rolled to a stop and Garrard later died.

Tabman pointed out a part of the video where he says the officers could have approached the situation differently. It's the space behind the SUV.

"You want to come out in a tactically wise situation," Tabman said.

"You want to avoid that situation, this is why we don't want things going mobile," Tabman said.

Tabman said because he thinks the vehicle was used as a weapon and posed a danger to the officers and other people, officers needed to control the situation.

"And the question will also come: 'But now he's fleeing, couldn't they just let him go and give him another day?' And the answer is no, that's not how the system works," Tabman said.

We also talked to a use-of-force expert with the ATF. They say these situations are viewed considering the totality of the circumstances known to the officer at the time he used force, and the question is not whether the officer could have done something different but was what he did reasonable.

Tabman said in this case, he thinks lethal force was reasonable.

"Once you're confronted with a life and death situation, you have to make a decision and I think in that situation they responded appropriately," Tabman said.

The Missouri State Highway Patrol is gathering information and working alongside the Jackson County prosecutor's office. The prosecuting attorney will review the case and decide if the officers acted within their right.

If someone was trying to run me over and I opened fire and killed them will I be justified like an officer or is my life less meaningful.

I'd like to know how they can say "Some might find the video disturbing", WHEN THEY DONT EVEN HAVE A VIDEO. THEY HAVE A STILL PHOTO FROM A SURVEILLANCE CAMERA.

Jaylon Elmore, the 19-year-old student who allegedly shot a police officer March 4 at Olathe East High School, has been granted another continuance. Elmore and an administrator also were injured.
OLATHE, KS・6 HOURS AGO
KSHB 41 Action News

The Kansas City, Missouri, Police Department announced Sunday that it has shifted approaches when it comes to responding to property crimes.
KANSAS CITY, MO・1 DAY AGO

A motorcyclist died after an overnight single-vehicle collision near the ramp from eastbound Interstate 70 to southbound Interstate 435 in Kansas City, Missouri.
KANSAS CITY, MO・1 DAY AGO
KSHB 41 Action News

Motorcyclist critically injured after crash outside gate of Arrowhead Stadium

A motorcyclist is in critical condition after a pedestrian crash Monday outside gate one for GEHA Field at Arrowhead Stadium in Kansas City, Missouri.
KANSAS CITY, MO・7 HOURS AGO
KSHB 41 Action News

A Sunday evening crash in Clay County has left a motorcyclist in critical condition; the other party involved is under investigation for potentially driving while intoxicated.
CLAY COUNTY, MO・9 HOURS AGO

Jackson County prosecutors charged a man Friday in an August 19 shooting death that began as a fistfight outside a KCMO house.
KANSAS CITY, MO・3 DAYS AGO
KSHB 41 Action News

A Grandview man was killed, and two others suffered serious injuries in a crash on in Cass County Sunday afternoon shortly before 2:00 p.m.
CASS COUNTY, MO・15 HOURS AGO
KSHB 41 Action News

A Kansas City, Missouri, man was convicted for shooting and killing a woman inside a home while her three children were inside.
KANSAS CITY, MO・3 DAYS AGO
KSHB 41 Action News

A couple is desperate for the public's help in finding items reportedly stolen from their U-Haul when they stopped in Kansas City.
KANSAS CITY, MO・1 DAY AGO

A motorcyclist was killed in a dirt park crash Sunday afternoon in Drexel, Missouri, after going airborne on a ramp.
DREXEL, MO・16 HOURS AGO
KSHB 41 Action News

1 dead, 1 seriously injured due to fatal crash in Northland

Interstate 435 heading northbound was temporarily shut down Saturday night in the Northland between Kansas Highway 5 and Missouri 45 Highway due to a fatal crash in Platte County, Missouri.
PLATTE COUNTY, MO・2 DAYS AGO
KSHB 41 Action News

A Leavenworth man was convicted of two counts of aggravated assault Friday for an incident in February.
LEAVENWORTH, KS・3 DAYS AGO
KSHB 41 Action News

An Independence woman died when her 2015 Toyota Highlander slammed into the back of a tractor trailer disabled on a highway.
INDEPENDENCE, MO・3 DAYS AGO
KSHB 41 Action News

FBI Kansas City is investigating a robbery that occurred around 11:15 a.m. at the Bank of America at 3100 Main Street in Kansas City, Missouri.
KANSAS CITY, MO・5 DAYS AGO
KSHB 41 Action News

3 KCK department heads announce resignation within days of each other

To get an in-depth look at what it takes to get behind the wheel, the I-Team went to a similar training in Kansas City, Kansas.
KANSAS CITY, KS・5 DAYS AGO