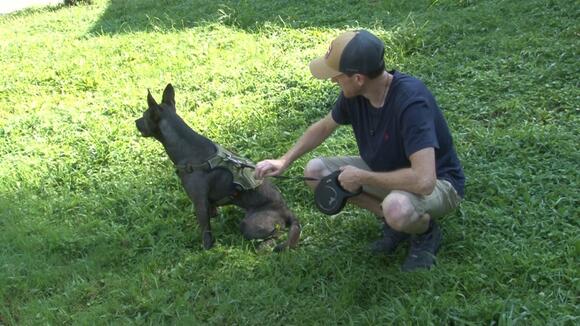 SALEM, W.Va. (WBOY) — James McManus spends much of his time traveling between Pennsylvania and Parkersburg via Interstate 79 and U.S. Route 50.

One day, he decided to change up his stopping point.

“I typically stop in Clarksburg at a rest area to walk my dogs,” McManus said. “I bypassed that and decided to pull off on the side of the road. I saw a sign for an animal shelter. So, I cruise up the road to check it out, because I am an animal advocate, a pitbull advocate. I met with some volunteers, and three weeks later, I had Mystic.”

Mystic is a Siberian husky, American pitbull, boxer and German Shepherd mix from the Doddridge County Humane Society. She joined McManus and his pack about a year ago.

Her life before McManus is primarily unknown.

“I don’t know if it was rough, but I know she didn’t have a lot of social contact with humans, and she was apparently allowed to run wild throughout Doddridge County,” McManus said. “She’s a wild dog. She’s a Mountaineer.”

Her lack of human socialization was noticeable when 12 News Anchor Harley Benda got to meet her, but was able to eventually sit down and pet Mystic with no problems.

However, at home, she’s a whole new pup.

“So when I actually have her at [the] house, she’s goofy. Just like every other dog, and I’m gonna say that’s the boxer in her,” McManus said. “But, she gets wiggly, goofy, she’s very, very playful with my other older dog. So, she actually annoys her because she wants to play with her so much. She loves for me to chase her in the yard.”

McManus said Mystic has been an amazing addition to his family, and that the Doddridge County Humane Society continues to be a place he volunteers his time.

“This place is absolutely great. Everybody that works here, [is] involved here has been just as good as I could ever expect. It’s been an unbelievable experience. I’d like to stay here and volunteer for as long as possible,” McManus said.

McManus is also a large advocate for pit bulls, who were often taken advantage of by people for their physical attributes , according to McManus. He plans to continue to save pit bulls from shelters across West Virginia and eventually create his own rescue for the breed.

FAIRMONT, W.Va. (WBOY) – “Mason Jar BBQ” celebrated its grand opening with a ribbon cutting at its Fairmont location on Friday. After the ribbon cutting, officials were invited inside to try samples of the ribs that the restaurant had smoked. They could even order food from the menu if they wanted. Owner, Steve Reese talked […]
FAIRMONT, WV・21 HOURS AGO
WBOY 12 News

The inaugural North Central West Virginia Girls in Aviation Day is being held at the Robert C. Byrd National Airspace Education Center on Saturday from 10 a.m. to 2 p.m.
CLARKSBURG, WV・2 DAYS AGO

ELLENBORO, W.Va. (WBOY) – Chuck Schofield Memorial Stadium was reopened with a new look Friday night. The stadium, named in honor of the late rebels standout, welcomed his family back for the rededication. Brand new turf and some other facilities upgrades finally were unveiled for rebels’ fans.
ELLENBORO, WV・18 HOURS AGO
WBOY 12 News

The Randolph County Sheriff's Office houses one recipient of the 2022 Rookie Prevention Resource Officer of the Year.
RANDOLPH COUNTY, WV・20 HOURS AGO

MORGANTOWN, W.Va. (WBOY) – Three local children with disabilities received adaptive bikes from Variety’s “My Bike” Program on Friday outside of PlayWorks in the Mountaineer Mall. The CEO of Variety, Charlie LaVallee, opened up the presentation of the bikes by talking about the three kinds of things they offer for children with disabilities. They include bikes, strollers, and […]
MORGANTOWN, WV・20 HOURS AGO
WBOY 12 News

One of West Virginia's biggest and oldest festivals, Elkins' Mountain State Forest Festival, is set to start next week, after several years off due to the pandemic.
ELKINS, WV・2 DAYS AGO
WBOY 12 News

West Virginia woman gets life for killing parents in fire

A West Virginia woman who set a fire that killed her parents three years ago when she was 16 has been sentenced to life, but will be eligible for parole in 15 years.
1 DAY AGO

Randolph County superintendent Debra Schmidlin went before the Randolph County Commission to discuss the benefits of current prevention resource officers (PRO), and how she believes the county is in need of a third.
RANDOLPH COUNTY, WV・20 HOURS AGO
WBOY 12 News

MORGANTOWN, W.Va. – West Virginia University has issued a campus warning to students and employees following a report of a shot being fired. According to a press release, the university is encouraging people to be vigilant after University Police received a report of a single shot fired into the air in the Area 1 parking […]
MORGANTOWN, WV・16 HOURS AGO

"Stonerise Kingwood" held a small parade on Miller Road for its residents on Sept. 22 at 4 p.m. to make its way down to the nursing facility.
KINGWOOD, WV・2 DAYS AGO
WBOY 12 News

Saltlick Road will be closed for one day this weekend

PRESTON COUNTY, W.Va. (WBOY) – The West Virginia Division of Highways announced on Thursday that County Route 51, Saltlick Road—not to be confused with Salt Lick Road near North Marion High School in Marion County or Saltwell Road off I-79 in Harrison County—will be closed on Saturday. According to the release, the closure will be […]
MARION COUNTY, WV・2 DAYS AGO