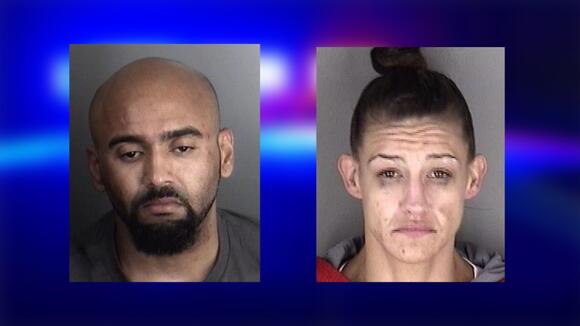 TOPEKA ( KSNT ) – Criminal charges have been filed against two suspects in relation to a murder case at the Traveler’s Inn in Topeka.

Andre Quinton and Cassie Holden both face charges for their alleged part in the murder of Jahlel Brundidge on Aug. 5 . The charges Quinton faces include:

At 3:07 p.m. on Aug. 5, 2022, law enforcement was sent to the Traveler’s Inn at 3486 SW Topeka Blvd in response to a shooting report. Officers found Brundidge suffering from a gunshot wound to the forearm and chest and was pronounced dead at the scene.

Two armed suspects were reportedly seen entering the hotel room and leaving shortly after the shots were fired. Both suspects fled the scene before officers arrived but were later taken into custody the same day as the shooting.

Both Holden and Quinton remain in custody with bonds set at $2.5 million. No future hearings have been scheduled at this time. Their first court appearance was made on Aug. 8 .

Lawrence man found guilty of stalking, assaulting person while they were sleeping

A 34-year-old Lawrence, Kansas man was found guilty by a jury Friday regarding an incident in October 2021 in which he followed a person home and assaulted them.
LAWRENCE, KS・22 HOURS AGO
KSNT News

TOPEKA (KSNT) – The Topeka Police Department has arrested a man after a shooting on Friday. Following an investigation, TPD said it arrested Bruce Holloway Jr., 20, of Lawrence. Holloway was charged with murder in the 1st degree and booked into the Shawnee County Department of Corrections early Saturday morning. At 10:08 a.m. on Sept. […]
TOPEKA, KS・5 HOURS AGO
KSNT News

TOPEKA (KSNT) – The Topeka Police Department has identified the victim of an early morning shooting in south Topeka. According to the TPD, the victim is Keith K. Gaylord Jr., 23, of Topeka. The investigation into the situation leading up to his death is ongoing. Around 10:08 a.m. on Sept. 30, officers with the TPD […]
TOPEKA, KS・1 DAY AGO

TOPEKA (KSNT) – Law enforcement have identified the murder suspect at the center of a police chase through downtown Topeka. According to the Kansas Bureau of Investigation, Eric D. Perkins, 33, of Excelsior Springs, Missouri was arrested on Thursday as the primary suspect in a shooting that left one person dead and another wounded in […]
TOPEKA, KS・1 DAY AGO
KSNT News

Victim identified in deadly shooting that led to police, gunfight

TOPEKA (KSNT) – The Topeka Police Department has identified the man who was shot and killed Thursday morning as Gregory Dean Butts, 55, of Topeka. On Thursday, Sept. 29, 2022, at approximately 9:32 a.m., TPD Officers were dispatched to the 3500 block of S.W. Kerry Ave. in for a shooting. Police said one person died […]
TOPEKA, KS・1 DAY AGO
KSNT News

TOPEKA (KSNT) – The Topeka Police Department was called to the scene of a shooting on Saturday morning. The shooting occurred at a residence in the 3000 block of SE Powell. When officers arrived to the scene, one person had minor injuries from a gunshot. TPD told 27 News that the victim was not transported […]
TOPEKA, KS・2 HOURS AGO
KSNT News

TOPEKA (KSNT) – One man is under arrest for multiple crimes including felony aggravated assault with a deadly weapon following a possible shooting in South Topeka on Wednesday. According to the Shawnee County Sheriff’s Office, Lance E. Fitzmaurice-Bridegroom was taken into custody on Sept. 28 after a domestic disturbance situation and a possible shooting. His […]
TOPEKA, KS・1 DAY AGO

3 arrested after child taken from Topeka found in Johnson County

Douglas County law enforcement stopped a car on K-7 and rescued a 3-year-old child who had been taken from Topeka, Kansas, early Friday.
JOHNSON COUNTY, KS・1 DAY AGO
KSNT News

TOPEKA (KSNT) – Video acquired by 27 News shows law enforcement surrounding and arresting a shooting suspect in downtown Topeka. Below are videos captured by 27 News viewers of the confrontation between law enforcement and a male suspect who is wanted in connection to an early morning shooting that left one dead and one injured. […]
TOPEKA, KS・1 DAY AGO
KSNT News

TOPEKA (KSNT) – The sound of a reciprocating saw got the attention of Topeka police officers who found a man burglarizing a building. Just before 3 p.m. on Wednesday, officers with the Topeka Police Department were on patrol near 605 S.W. Fairlawn Road when they heard a saw. According to the police department, officers followed […]
TOPEKA, KS・2 DAYS AGO

TOPEKA, (KSNT)— Kansas Treasurer Lynn Rogers was inside a building just feet away from a shootout that occurred in downtown Topeka on Friday. In an interview with Kansas Capitol Bureau, Rogers said he was in a meeting inside KPERS, a state office building, just across from Townsite Tower, where the shootout came to an abrupt […]
TOPEKA, KS・1 DAY AGO
KSNT News

TOPEKA (KSNT) – Topeka police have confirmed a body was found underneath the Polk Quincy Viaduct in downtown Topeka. According to authorities, police were called to the 200 block of S.E. Quincy after 8 a.m. on Friday. “On September 30, 2022, at approximately 8:00 a.m., an individual walked into the Law Enforcement Center and reported […]
TOPEKA, KS・1 DAY AGO
KSNT News

TOPEKA (KSNT) – New information has been released in the ongoing saga of the Dana Chandler case in Topeka. A Thursday hearing for Chandler saw a Shawnee County judge grant the defense motion to lower Chandler’s bond down to $350,000. The Shawnee County District Attorney’s Officer said they will try Chandler again. The trial date […]
TOPEKA, KS・1 DAY AGO
KSNT News

TOPEKA (KSNT) – At least one police officer was hit by gunfire Thursday during a shootout in downtown Topeka. The Topeka Police Department (TPD) and the Shawnee County Sheriff’s Office (SSO), have asked the Kansas Bureau of Investigation (KBI) to investigate an officer-involved shooting involving a homicide suspect that involved both agencies Thursday morning in […]
TOPEKA, KS・2 DAYS AGO
KSNT News

RILEY COUNTY (KSNT) – A man who held his girlfriend captive and tortured her in a Manhattan hotel is sentenced to 363 months by the Kansas Department of Corrections. Isain Lopez was sentenced Tuesday by Judge Kendra Lewison after he was convicted to 272 months for aggravated kidnapping, 41 months for robbery, 32 months for […]
RILEY COUNTY, KS・3 DAYS AGO