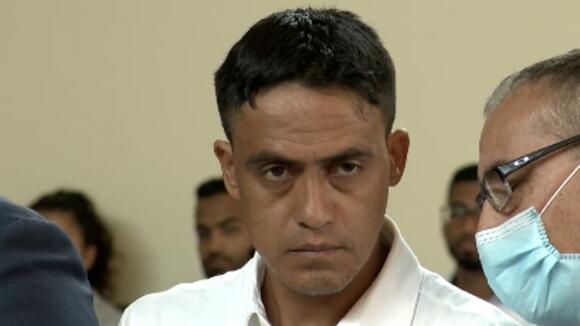 A Bridgeport man arrested for a hit-and-run crash that killed a motorcyclist from Fairfield went before a judge for the first time Wednesday. Jairo Lopez-Bonilla, 39, was arraigned in Bridgeport Superior Court on charges of negligent homicide with a motor vehicle and evading responsibility resulting in death.

It was a difficult day for the family of victim Hazem Mohamed, 26. A dozen loved ones were at the arraignment, which was the first time they saw Lopez-Bonilla.

“It’s just, it’s hard to see him out,” said Abby Calderon, Mohamed’s sister. Calderon spoke to News 12 through tears, holding hands with Mohamed’s sister after court. “If he cared, he would have stayed and helped him, and maybe we’d be in a different situation,” Calderon said.

Mohamed was killed while out on a ride last Tuesday evening. Fairfield police said he was on Kings Highway East near Jennings Road when Lopez-Bonilla drove into him and never stopped. Police tracked down Lopez-Bonilla later that night and arrested him. He posted $250,000 bond hours later, much to the dismay of Mohamad's family.

In court, Lopez-Bonilla pleaded not guilty and asked for a jury trial, which is standard. Judge Tracey Lee Dayton ordered him not to drive and to turn over his passport as conditions of his bond release.

The attorney for Mohamed’s family, Johnpatrick O’Brien, joined them in court and addressed the judge briefly. “He was a son. He was a brother. He was a friend. He was a loved one, and that’s gone now,” O’Brien said as he pointed out the family’s presence. “The family just wanted to make sure the court was aware that they’re going to be here for every hearing, and all they ask for is justice.”

Lopez-Bonilla’s attorney Dennis Bradley told News 12, “This is a tragic incident without a shadow of a doubt. We have a passing of a young person, and our hearts are with family, who are obviously grieving at this time.”

Bradley said there is still an investigation into what happened and asked people not to rush to judgment until all the information comes out.

“The facts will show, and I think the people should see, that this is not an incident where somebody was being belligerent, malicious, or operated with any malice to produce any type of injury to any person,” Bradley said.

Lopez-Bonilla is back in court Oct. 4.

Police say it was found Sunday night in a cardboard box on the border of the park and the school.
STAMFORD, CT・2 HOURS AGO
News 12

A 28-year-old Hoboken resident was shot and killed over the weekend.
HOBOKEN, NJ・1 DAY AGO
News 12

Stamford police have arrested a man for attacking a 71-year-old Lyft driver a year ago. Andre Lecky, 26, is charged with second-degree assault of an elderly person. The victim, Stuart Berman, of Wilton, recently went public with his story during a news conference announcing legal action against Lyft by 17 drivers and passengers.
STAMFORD, CT・1 DAY AGO
News 12

News 12 has confirmed Amayalise Perez, 14, has been found according to her mother, Carie Rodriguez Gonzalez.
ORANGE COUNTY, NY・17 HOURS AGO

Newark's public safety directory is requesting the public's help in identifying a man wanted for questioning after a punch-from-behind attack and robbery last week.
NEWARK, NJ・1 DAY AGO
News 12

Police say a man was killed and two others were injured in a shooting in Brooklyn early Sunday morning.
BROOKLYN, NY・1 DAY AGO
News 12

Police are searching for the suspect who shot and killed a 17-year-old boy in the Bronx Sunday night.
BRONX, NY・1 DAY AGO
News 12

A 13-year-old boy from Brooklyn has been missing since Saturday, according to authorities.
BROOKLYN, NY・22 HOURS AGO

Authorities: Restaurant owner pleads guilty to role in 2017 fire that destroyed own establishment

Authorities say an Orange County restaurant owner was convicted Monday of an arson that destroyed his restaurant in 2017. Zef Gjurashaj, 60, had been charged with arson and conspiracy. Prosecutors said he conspired with his nephew’s wife, 38-year-old Marina Gjurashaj, in setting the fire to Andiamo’s Restaurant in Newburgh. She...
ORANGE COUNTY, NY・16 HOURS AGO
News 12

A Suffolk County family is concerned for the safety of their children and neighborhood after their security cameras caught a man looking into their home over the weekend.
SMITHTOWN, NY・11 HOURS AGO
News 12

Hempstead Village officials say the fire broke out around 6:30 a.m. Monday at a home on 103 Front St.
HEMPSTEAD, NY・15 HOURS AGO

A bicyclist was struck by a car in Westhampton on Monday, police say
WESTHAMPTON, NY・11 HOURS AGO
News 12

Police: Bronx MTA worker punched in the face while on the job

A Metropolitan Transportation Authority worker was randomly attacked while on the job, according to the NYPD.
BRONX, NY・16 HOURS AGO
News 12

Bay Ridge business owners up in arms over string of robberies

Small business owners in Bay Ridge have voiced their outrage over a string of robberies in the neighborhood over the last few weeks.
RIDGE, NY・13 HOURS AGO

Four officers are recovering from injuries after the arrest of a man led to a violent scuffle on 11th Avenue in Brooklyn.
BROOKLYN, NY・1 DAY AGO
News 12

Police say a 17-year-old teen is in critical condition after he was shot Saturday night in the Bronx. Authorities say the male teen suffered a gunshot wound to the torso before midnight at 2407 Morris Ave. in the Fordham section of the borough. He was transported to St. Barnabas Hospital...
BRONX, NY・2 DAYS AGO
News 12

Seniors and people with disabilities who live at a Bridgeport complex said they are upset over a company's towing practices.
BRIDGEPORT, CT・1 DAY AGO
News 12

Driver hospitalized in morning crash on I-84 in Danbury

Police say the truck crashed off the highway and went down into the woods near Lake Avenue Extension around 3:20 a.m. Monday.
DANBURY, CT・22 HOURS AGO