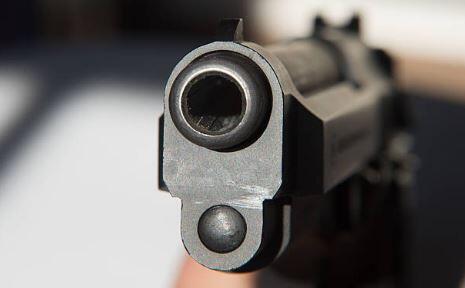 ST. LOUIS COUNTY, Mo. – A Florissant man accused of shooting another man just after they departed a MetroBus told police he didn’t mean to shoot the victim so many times.

The St. Louis County Prosecuting Attorney’s Office charged Johnny Evans with one count of first-degree assault and one count of armed criminal action.

According to a probable cause statement obtained from the St. Louis County Police Department, the shooting occurred Tuesday, August 9, at Jennings Station and Halls Ferry roads.

Police said Evans and the victim were on the bus together. When they got off the bus, Evans allegedly took out a gun and shot the victim twice. Evans walked away but returned to shoot the victim a third time.

The victim was rushed to a local hospital to undergo surgery. There’s no word on that individual’s condition.

Evans was later apprehended and police found three guns in his bag, police said. During interrogation, Evans admitted to shooting the victim and said he regretted the third shot.

Charges filed in the murder of St. Ann man

ST. LOUIS COUNTY, Mo. – A man has been arrested and charged with murder following the shooting death of a St. Ann man. Terrance Washington, 32, was shot and killed on Saturday at 12:15 a.m. in the 10,000 block of Douglas Court. The Major Case Squad of Greater St. Louis said James Cody, 30, was […]
SAINT ANN, MO・6 HOURS AGO
FOX2Now

One shot, one in custody in Manchester Ave. shooting

ST. LOUIS – An investigation is underway after one person was shot Wednesday afternoon on Machester Avenue in St. Louis City. One suspect is in custody. The shooting happened around 2 p.m. Wednesday in the 4200 block of Manchester Avenue in the Forest Park Southeast neighborhood. The St. Louis...
SAINT LOUIS, MO・6 HOURS AGO
FOX 2

Authorities have confirmed to FOX 2 News that a staff member was severely beaten during an attempted mass escape at the St. Louis Juvenile Detention Center on Sunday night.
SAINT LOUIS, MO・1 DAY AGO
FOX 2

More than five years ago, Kaylee Priscu was driving on Interstate 270 near Dorsett when traffic stopped, except for a driver behind her with no license.
SAINT LOUIS COUNTY, MO・22 HOURS AGO

A 40-year-old man is accused of threatening to kill his female roommate and later torching her mother’s home in Troy, Illinois.
TROY, IL・1 DAY AGO
FOX 2

Man charged with murder after body found in St. Louis

A man is charged with murder after a decomposing body was found along a north St. Louis street.
SAINT LOUIS, MO・2 DAYS AGO
FOX 2

The man convicted in the murder of his disabled nine-year-old son will be sentenced Tuesday.
SAINT LOUIS COUNTY, MO・1 DAY AGO

Man stabbed in back by girlfriend in south St. Louis

ST. LOUIS – A man was literally stabbed in the back by his girlfriend early Monday morning in south St. Louis. The 43-year-old man told police that he woke up at about 1 a.m. with a sharp pain from his back. Police said, “When he got up, he observed his girlfriend holding a knife confronting […]
SAINT LOUIS, MO・2 DAYS AGO
FOX 2

ST. LOUIS – A Franklin County woman committed pandemic loan fraud while awaiting sentencing in a six-figure embezzlement case, federal prosecutors said Wednesday. Prosecutors with the U.S. Attorney’s Office for the Eastern District of Missouri said Christen Schulte pleaded guilty on Aug. 3, 2020 to two counts of wire fraud, two counts of bank fraud, and one count of money laundering. She admitted to embezzling funds from her employer and other individuals associated with her employer. She then sought multiple delays in her sentencing.
FRANKLIN COUNTY, MO・5 HOURS AGO
FOX2Now

Cahokia HS on lockdown after third threat this week

CAHOKIA HEIGHTS, Ill. – Cahokia High School is on lockdown Wednesday. This comes after they’ve received a threat via airdrop three times this week. The first came on Monday, then again Tuesday, and now on Wednesday. FOX 2 was notified of Wednesday’s lockdown at about 1 p.m.
CAHOKIA, IL・7 HOURS AGO

OAKVILLE, Mo. – Officials have lifted a lockdown at Oakville High School in south St. Louis County after investigating a threatening message on school grounds. District officials did no immediately disclose information on the threat, but tell FOX 2 that police and school administrators are investigating it. All students and staff are considered to be safe.
OAKVILLE, MO・7 HOURS AGO
FOX 2

$5K reward for man wanted on multiple warrants in Illinois

ST. LOUIS COUNTY, Mo. – An anonymous threat has caused Mehlville High School to lock down Monday. The Mehlville School District said as of 12:30 p.m., police were at the school investigating. They assured all parents that all students and staff are safe. The lockdown was lifted at approximately 1:40 p.m. The district said all […]
SAINT LOUIS COUNTY, MO・2 DAYS AGO
FOX 2

The U.S. Department of Justice has filed a discrimination lawsuit against an apartment complex in south St. Louis County. The suit alleges the apartments are not accessible to people with disabilities.
SAINT LOUIS COUNTY, MO・7 HOURS AGO
FOX 2

Emergency crews helped rescue a family of three and their cat during a house fire late Monday evening in O'Fallon.
O'FALLON, MO・1 DAY AGO
FOX 2

The St. Louis Fire Department is at the scene of a fire Wednesday morning.
SAINT LOUIS, MO・14 HOURS AGO
FOX 2

There are fences and decks all over Steffanie Haertling’s Wentzville neighborhood. When her family moved here in May, they planned to have a deck built on their property.
WENTZVILLE, MO・22 HOURS AGO
FOX 2

A hearing is scheduled Tuesday morning in the case of an alleged hazing incident at the University of Missouri.
SAINT LOUIS, MO・1 DAY AGO