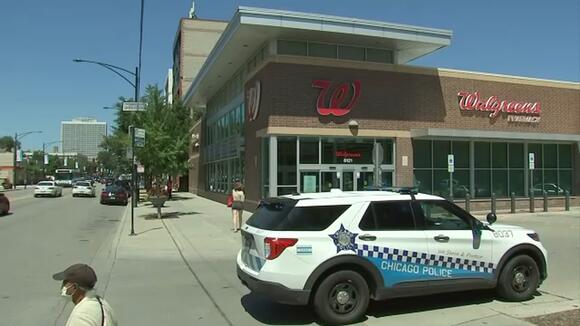 A 17-year-old boy was shot in a parking lot in the Edgewater neighborhood on Chicago's North Side Wednesday, according to police. Chicago police said the teen was shot in the 6100-block of North Broadway around 12:50 p.m. Investigators taped off the entrance to a Walgreens in the area as they investigated the midday shooting. Police said a group approached the victim in a parking lot, then one of them pulled out a gun and started firing. The victim was shot in the back and was taken to St. Francis Hospital in good condition. Area Three detectives are investigating. So far, no one is in custody.

Joliet police said a 2-year-old boy is in critical condition after finding an unsecured gun and shooting himself in the head.
JOLIET, IL・9 HOURS AGO
ABC 7 Chicago

A 14-year-old was seriously injured in a shooting in South Deering Monday evening, Chicago police said.
CHICAGO, IL・1 DAY AGO

"I contacted the two officers who helped me previously and said, 'you're never gonna believe this, but my car was stolen again.'"
CHICAGO, IL・1 DAY AGO
ABC 7 Chicago

Two people were seriously injured after a fire in a four-story apartment building in the Brainerd neighborhood Tuesday morning, the Chicago Fire Department said.
CHICAGO, IL・18 HOURS AGO

"Both of you are heroes," the victim said of the bystanders who came to help her.
CHICAGO, IL・12 HOURS AGO
ABC 7 Chicago

Chicago shooting: Man found shot in head, killed inside vehicle in Back of the Yards, police say

A man was found shot to death inside a vehicle on the South Side, Chicago police said.
CHICAGO, IL・1 DAY AGO
ABC 7 Chicago

"In my 28 years, I haven't seen a case that has hit as close to home for myself and so many others in this department," then-CPD Supt. Eddie Johnson said at the time.
CHICAGO, IL・16 HOURS AGO

The question of how someone could breach security at the Chicago Police Department's Homan Square facility is complicated by the importance of the facility to CPD's citywide operation.
CHICAGO, IL・1 DAY AGO
ABC 7 Chicago

Police said one of the suspects had a knife. They punched and kicked the victim, stole his bike and then threw the bike on the tracks, where it was hit by an oncoming train.
CHICAGO, IL・13 HOURS AGO
ABC 7 Chicago

The woman who recorded video of the incident said she went searching for help at the train station, but no one was around.
CHICAGO, IL・20 HOURS AGO
ABC 7 Chicago

Aurora police are investigating a shooting that has left one person dead and another in critical condition.
AURORA, IL・3 DAYS AGO
ABC 7 Chicago

CFD: 2 workers trapped in exterior elevator on silo on SE Side rescued

Two workers became stuck in an exterior elevator on a silo on the Southeast Side Tuesday morning, the Chicago Fire Department said.
CHICAGO, IL・14 HOURS AGO
ABC 7 Chicago

A 16-year-old boy has died after he and another teen were critically hurt in a West Side drive-by shooting, authorities said.
2 DAYS AGO