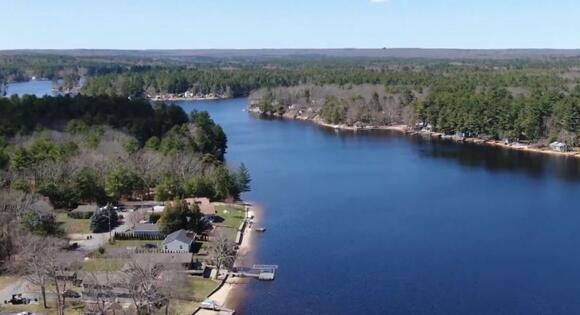 COVENTRY, R.I. (WPRI) — The R.I. Department of Environmental Management (DEM) is demanding the owners of the dam at Johnson’s Pond raise the water level.

In a compliance order issued Wednesday, the DEM cited Soscia Holdings, LLC, for violating recently-enacted legislation that mandates the dam be operated “in a manner that is consistent with historic use as determined by the director.”

The compliance order also cites the Soscia’s for violating Rhode Island’s Water Quality Regulations, which requires “all waters be free … from anthropogenic activities … that adversely affect the physical, chemical or biological integrity of the habitat.”

The pond’s water levels have been a point of contention ever since Soscia Holdings purchased its dam and water flow rights two years ago.

Residents who live on the pond have repeatedly expressed concerns over the water levels, claiming that Soscia Holdings drained it to the point where the rocks and vegetation on the bottom were exposed. Homeowners also reported seeing dying fish and turtles, as well as the presence of toxic blue-green algae.

The order is in effect for at least 45 days. The DEM said they will be working with the Rhode Island Attorney General Peter Neronha’s office to ensure compliance.

“Johnson’s Pond is an important community and state resource, and it is imperative that its water is held at reasonable levels in accordance with state law,” Neronha said in a statement. “The unchecked outflow of water from the pond by Soscia Holdings is not only a detriment to the pond and those who enjoy it, but not in compliance with a recently passed state law intended to protect water levels of dams and reservoirs.”

The compliance order comes as the dam owners take the DEM to federal court over the new state law. Neronha is representing the DEM in that case.

In a statement, Coventry Town Manager Benjamin Marchant said the town will be working with the state to “facilitate a coordinated effort with the goal of closing the dam’s flow gates and prevent the pond from being drained any further.”

The hearings will be presided over by a New Hampshire judge after all three U.S. District Court judges in Rhode Island recused themselves. The first hearing is scheduled for Aug. 18.

Patrick Dougherty, the attorney for Soscia Holdings, declined to comment on the specifics of the case.

“It is not my client’s intention to litigate its case in the media,” Dougherty explained. “Soscia Holdings, LLC will respond to and address the latest actions of the Rhode Island Department of Environmental Management in the appropriate forum, to wit, the United States District Court.”

Earlier this year, the Middletown Police Department became the hub for donations of surplus tactical gear to send to Ukraine.
MIDDLETOWN, RI・2 HOURS AGO
WPRI 12 News

The DCYF said it's had contact with the child's family in the past, but was not involved at the time of this incident.
PROVIDENCE, RI・5 HOURS AGO
WPRI 12 News

A Central Falls roadway is closed as police investigate in a nearby neighborhood.
CENTRAL FALLS, RI・47 MINUTES AGO

The mansion is on the National register of Historic Places.
BARRINGTON, RI・2 DAYS AGO
WPRI 12 News

Celena Vieira was arrested in November 2020 after prosecutors said she pointed a gun at the victim and fired several shots in her direction.
PAWTUCKET, RI・2 HOURS AGO
WPRI 12 News

WARWICK, R.I. (WPRI) — Over 300 people participated in the 2022 MS (Multiple Sclerosis) Jet Pull at T.F Green International Airport Saturday.  Over 20 teams competed in the fundraiser, with the goal of pulling an aircraft, which weighs about 72 tons, down the runway.  “Pulling that plane is not as easy as it may look. It gets […]
WARWICK, RI・2 DAYS AGO
WPRI 12 News

Cyclists, joggers and walkers will no doubt be excited to hear that a couple of dangerous detours in Barrington will soon be a thing of the past.
BARRINGTON, RI・4 HOURS AGO

Arcade Snacks, a Massachusetts-based company, is recalling its 15-ounch packages of candy corn because they might contain egg, which is not listed as an ingredient on the label.
AUBURN, MA・5 HOURS AGO
WPRI 12 News

The Providence DPW employee arrested last week for reportedly dealing drugs while on the job was caught red-handed by detectives, according to court documents.
PROVIDENCE, RI・3 DAYS AGO
WPRI 12 News

Providence Mayor Jorge Elorza joined 12 news at 4 Friday to discuss the ongoing school bus issues and what advice he would give to Mayor-elect Brett Smiley.
PROVIDENCE, RI・3 DAYS AGO
WPRI 12 News

EAST PROVIDENCE, R.I. (WPRI) — From North Kingstown to Barrington, many 12 News viewers captured a beam of light moving through the sky Saturday evening. Viewers started sending in reports after noticing the display around 7:45 p.m. The light in the sky is described as something that looks like a meteor or a comet. A […]
BARRINGTON, RI・1 DAY AGO

PROVIDENCE, R.I. (WPRI) — WaterFire honored several state educators, including the RI Teacher of the Year Lisa Leaheey, at Saturday’s lighting.  The event is part of WaterFire’s Celebrating Educational Excellence in Rhode Island with the Rhode Island Department of Education.  “It’s heartwarming to know they appreciate what we do.” Said Leaheey. “They come through our classrooms […]
PROVIDENCE, RI・2 DAYS AGO
WPRI 12 News

PROVIDENCE, R.I. (WPRI) — First responders in Providence had a busy Sunday morning, searching for a man who witnesses initially thought may be in the water.   Officers received reports of a car in the water around 5:45 a.m. near the Gano Street Park Boat Launch.  Upon investigating, officers found a woman in wet clothing who said […]
PROVIDENCE, RI・1 DAY AGO
WPRI 12 News

Parlange began his role as President in August 2021 after former president David Dooley announced his retirement in 2020. Since then, he has reportedly developed 20 new Ph.D. fellowships to attract graduate research students.
SOUTH KINGSTOWN, RI・3 DAYS AGO
WPRI 12 News

Police: Woman driven into river by man she met on dating app

Police are investigating after a woman was reportedly driven into the Seekonk River by someone she met on a dating app.
SEEKONK, MA・52 MINUTES AGO
WPRI 12 News

NARRAGANSETT, R.I. (WPRI) — A vigil was held in Narragansett Sunday to honor the life of a Charlestown woman who was killed in a stabbing on Monday. Friends and family of the victim, 45-year-old Grya Pihlkrantz, said she always made everyone feel welcome. “People that don’t have friends and family around here, that feel invisible, […]
CHARLESTOWN, RI・1 DAY AGO
WPRI 12 News

The deaths of that man and former Mayor Susan Menard were both found to be medical in nature.
WOONSOCKET, RI・3 DAYS AGO
WPRI 12 News

WARWICK, R.I. (WPRI) — A Warwick business is now boarded up after a car drove through the front of the building on Saturday. A maroon vehicle could be seen sticking out of the front window of Wild Birds Unlimited on Bald Hill Road. Police have not released many details, but say they’re investigating the incident. […]
WARWICK, RI・1 DAY AGO