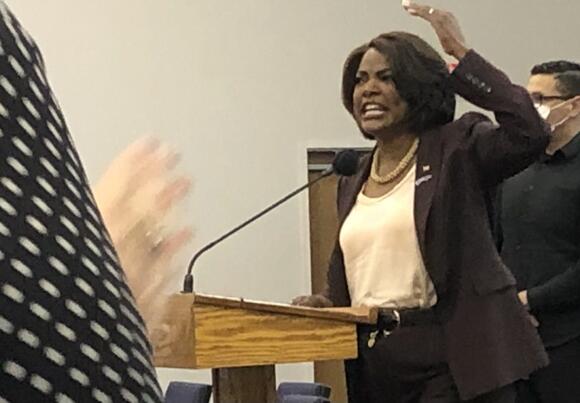 DELTONA — If Val Demings' appearance here last Saturday is a preview of the home stretch of her run for U.S. Senate, brace yourself for fire.

In a hoarse voice that bellowed through sentences punctuated with exclamations, Demings gave what amounted to a locker room motivational speech to Volusia County Democrats at a candidates' forum at New Hope Church in Deltona. It was a different Val Demings and it might just be the version that Florida Democrats need to inspire them in a year that otherwise appears to be shaping up like another Republican rout.

Aug. 23 primary: Who's running for election in Volusia, Flagler counties? Everything you need to know.

League of Women Voters debate: Which of the Volusia School Board candidates took on LWV questions?

Demings — who returns to Volusia County this Saturday as keynote speaker of the party's Mary McLeod Bethune Gala at the Ocean Center in Daytona Beach — acknowledged the challenge of taking on a three-term incumbent in a state that hasn't backed a Democratic senator candidate since Bill Nelson a decade ago.

"If you’re looking for easy, you’re in the wrong place," she told the Deltona audience. "I’m reminded of the words of our 35th president of the United States, President John F. Kennedy … he said we will do this and the other thing not because they are easy. Do we know who we are as a nation?!! We will do them because they are hard!"

She was more animated than usual, raising her voice and fists, repeatedly pounding on the lectern, sometimes punctuating each syllable of her remarks.

Demings touched on many of the issues that drive voters to the polls. Education, Social Security, Medicare. Inflation. Affordable housing. Guns.

"We have some serious issues, but instead of focusing on those issues, my opponent and others like him are sitting back, taking away constitutional rights, sitting back taking away a woman’s right to choose," Demings said. "We’re NOT going to stand for it. We’re going to fight!”

It was exactly the message the event's organizer, Alyce Shelton, was seeking to punctuate an event highlighting many of the down-ballot candidates for County Council, city offices and school board.

“We need somebody to get us just motivated to go. I’ve been working in these activist groups and stuff and people have just kind of been sleeping, and I know COVID has had a lot to do with it, but you know, we just need to get everybody fired up," Shelton said. "So when I invited her, I said, ‘Val, we need a rah-rah, and she did it. She brought it.”

Joyce Cusack: 'It can happen'

Joyce Cusack, who in 2000 became the first Black woman to represent West Volusia in the Florida House of Representatives, defeated a Republican incumbent in a district that was more than 80% white. She knows a thing or two about winning elections, and introduced Demings at the rally.

"(Demings) was adamant about this thing. She is not playing. This is for real. And she has the wherewithal to make this happen," Cusack said. "If we show up and we vote in large numbers, we win. She will become the next U.S. senator. It can happen. It happened to me."

Veteran observers of politics also see a crack in the wall Florida Republicans have built to maintain their control of statewide politics.

"She looks like the Democrats’ best choice to retain at least one statewide office," says Carol Weissert, professor emerita of political science at Florida State University. "Her political resume is strong and she is a good campaigner. While many funders have written off Florida for Democratic candidates, she is the one who could pull it off. So that’s probably why she has been more successful at raising funds than the Democratic candidates for governor."

Demings has been able to outraise her opponent, collecting $43 million to Rubio's $35 million through the end of June.

Even still, Aubrey Jewett, associate professor of political science at the University of Central Florida, notes that nothing is easy for Democrats in Florida in 2022.

The fact that Demings is a Black woman gives Florida Democrats hope she will stand out as a candidate, he said.

"They're hoping she can really mobilize the minority voters in this state, particularly African-American voters, and that a woman, a female candidate, particularly now that we've had the U.S. Supreme Court overturn Roe, maybe the fact that a woman candidate running is a plus," Jewett said. "It might be a plus in normal times, but perhaps in this election, that can be even a little bit more of an advantage."

Jewett said Rubio is by no means a weak candidate. "But relative to (Gov. Ron) DeSantis, he's not universally loved by Republicans. Particularly Trump Republicans have been a little skeptical of him," Jewett said. 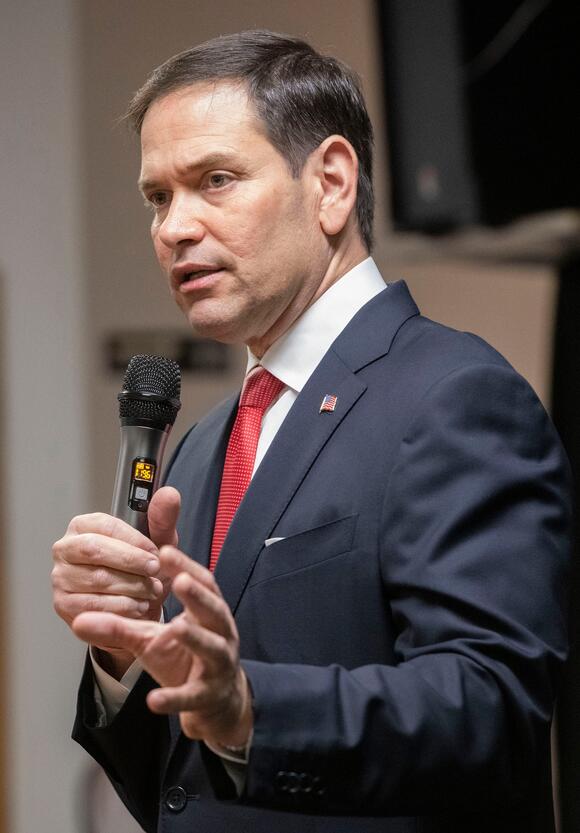 "Val Demings will do anything to distract what this race is really about: Joe Biden driving the economy into the ground and Demings' unconditional support for Democrats' radical agenda," Gregory said. "When Floridians go to the ballot box in November, they're going to blame Demings and Democrat-controlled Washington for the extra $9,000 they're spending on basic necessities this year."

Weissert agrees the abortion issue might raise the participation level of women and younger voters.

"But the Rubio-Demings race was defined early by Rubio who questioned one of Demings’ strong points — law enforcement. She has been on the defensive and hasn’t really gotten to define her own issues — maybe abortion," Weissert said.

Rubio has collected five major endorsements from law enforcement groups, including 55 of Florida's 66 sheriffs, while he has run ads attacking her for comments showing support for an effort to defund the Minneapolis police and reorganize that agency following the 2020 killing of George Floyd.

Demings still has a way to go to build name recognition and make her case to Florida's widespread media markets, Weissert said.

"On paper Demings is great — Black former police chief from a growing and important area of the state," she said. "But I’m not sure she has really sold her credentials very well to the rest of the state. She still has time, of course, but I would say at this point she isn’t that well-known outside of Central Florida." 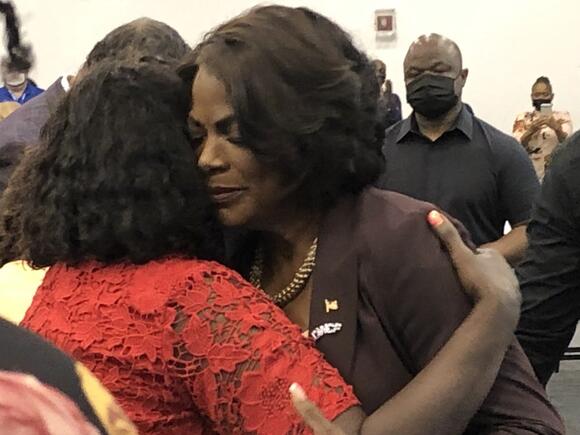 L. Ronald Durham, president of the Volusia County Black Democratic Caucus, was among those who heard Demings speak in Deltona last week.

"You can see the energy she brought to the room today," Durham said. "She has a passion for what it is that she wants to do for this state. She’s committed, she’s dedicated, she’s already proven. She’s made her bones so to speak, and she’s proven she’s an effective leader in the state of Florida."

"When you’re passionate, it drives something in you. That sometimes it’s an out-of-body experience and I think she’s just driving home the point that it’s serious and not to be kind of taking it lightly," Davis said. "She does have a law enforcement background, so, like, ‘Hey, I need you all to hear this.’ And so I think it was an approach that we were able to feel. The audience was standing up, which was in support of, ‘We understand what you are trying to say, and we are behind you.’"

Never miss a story: Subscribe to The Daytona Beach News-Journal using the link at the top of the page.

Hm, let’s see, do you want a person that voted 100% for Pelosi’s Bills and will do the same for Schumer in the Senate? Demings is not a fighter, she is a follower…..

No thanks fire dragon 🐉…. We don’t need a blue state disaster.. we have enough examples… CA , NY and NJ where criminals have more rights then legal citizens

Tired of her commercials she is talking about someone else. She never says what she gonna accomplish just another democrat