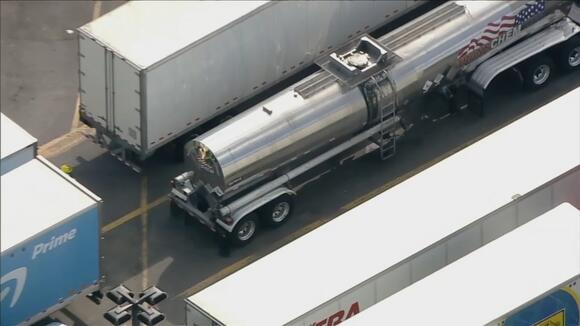 The smell is foul, and it may linger for a while, but officials in Gloucester County, New Jersey say there is no danger from the fumes that blanketed parts of the area with a strong odor. Chief Matthew Brenner of the East Greenwich Township Police Department said during a news conference on Thursday afternoon that nothing harmful has been detected in the air from the fumes that were expelled from a tanker truck. However, he promised that officials will continue to keep an eye on the situation. "Although the odor was strong and pungent, the air quality was not detecting anything harmful for our local residents or businesses," he said. "We're continuing to monitor that as we speak." The odor is coming from an additive to a product called Lubrizol-1389. After receiving numerous 911 calls of an odor around 3 p.m. Wednesday, emergency crews discovered a truck hauling the chemical at the TA Truck Service Area on the 100 block of Berkley Road in near Paulsboro off I-295 expelling fumes from its tanker. The source of the fumes was contained earlier Thursday, officials said, though they cautioned that the smell could linger for days. Brenner said the county has set up a 911 call center just for this incident. Mitigation efforts which included scrubbing and cooling operations continued Thursday night, . Annmarie Ruiz, of the Gloucester County Health Department, said anyone experiencing mild irritation such as eye itching, sore throat, vomiting or headache should seek medical attention. Ruiz said that she does not know of anyone who has been hospitalized because of this incident. The truck expelling the chemical remained on location early Thursday morning. Officials say there was no leak. Rather, the truck was releasing the fumes because of the high temperature. "It's doing exactly what it should do. When the temperature rises to a certain level, the vessel itself will actually expel fumes. So it's built to do that," said East Greenwich Township Police Chief Matthew Brenner. "There's no leak per see." The chemical sent a "rotten egg smell" across the region. "It literally burns your nostrils. It gave me an instant headache," said Sarah Rego of Paulsboro.

Emergency crews responded to a South Jersey rest stop Wednesday afternoon due to reports of an unusual odor in the air.

Truck driver Shane O'Dell was parked right next to the truck. "I'm going 'no wonder no one wanted to park here,' something's reeking like natural gas," O'Dell said. Dell says he and another truck driver were running around trying to warn everyone of what was going on. "It's building pressure every 30 seconds and you could see the vapors. You could see the air just like this. That's how much vapor was coming out of this tank," Dell said. A representative from Lubrizol says they are aware of the situation and investigating but have no further comment. The Gloucester County Office of Emergency Management says residents with questions or concerns can call the designated hotline at 856-384-6800. It will be open from 8 a.m. to 4 p.m.

According to the East Greenwich Township Police Department, the odor is coming from a truck that is expelling fumes from a fuel additive called "Lubrizol."

Is this a big cover up? Smell still lingering this morning. Everyone has headaches, sick to their stomachs and tired. Seems to be effecting a large area. Something isn't right.

None of these types of chemicals are safe to breathe, but I'm sure it makes something that you "can't live with out." If it really bothers you, LOOK UP WHAT IT IS MADE FOR AND BOYCOTT IT. That's the only way you can make a difference. Same thing with the refineries, if you hate the smell so much, drive an electric car or a bike.

yesterday morning I smelled a strong glue type odor for miles and it gave me an instant headache not sure if it had anything to do with this but it was even hard to breathe.

'They took over the town': Wildwood mayor reacts to deadly H20i car rally

According to police, the crash happened near mile marker 349 in Feasterville. Motorists were asked to seek an alternative route.
BUCKS COUNTY, PA・4 HOURS AGO
6abc Action News

According to the Cape May County Prosecutor's Office, the driver of a 2003 Infiniti crashed into a 2014 Honda Civic and then two pedestrians.
WILDWOOD, NJ・1 DAY AGO
6abc Action News

"The Streets Department apologizes to the neighbors of 2800 block of E. Clearfield St. for this inappropriate behavior by sanitation employees," the city said in a statement.
PHILADELPHIA, PA・14 HOURS AGO

Be Kind: A "Lucky" kitten rescued by attentive driver in Montgomery County

The kitten, dubbed ''Lucky" by his rescuer, was stuck in the undercarriage of his car.
MONTGOMERY COUNTY, PA・11 HOURS AGO
6abc Action News

Drivers caught in bus lanes could be issued tickets anywhere from $51 for disobeying signs to $101 for blocking mass transit.
PHILADELPHIA, PA・14 HOURS AGO
6abc Action News

Video from the Action Cam showed water flowing down the street, while the sinkhole was blocked off by traffic cones.
PHILADELPHIA, PA・7 HOURS AGO
6abc Action News

Authorities said the crash involved a car and a New Jersey Transit bus. Westbound lanes of Route 70 were closed at Kings Highway while crews investigated.
CHERRY HILL, NJ・3 DAYS AGO

Chopper 6 was over the scene as water filled the roadway.
PHILADELPHIA, PA・1 DAY AGO
6abc Action News

While events like Wildwood's Irish Festival will bring people down to the shore this weekend, officials are asking people to stay out of the water.
WILDWOOD, NJ・4 DAYS AGO
6abc Action News

Hundreds of University of Pennsylvania students evacuated from apartments after fire

The fire began in a microwave on the third floor.
PHILADELPHIA, PA・1 DAY AGO

Tiffany Fletcher, a mother who leaves behind three boys, was simply sitting outside of the center taking a break.
PHILADELPHIA, PA・1 DAY AGO
6abc Action News

"I could be dead right now," Essam Zarkli said. "I'm 65 years old. You think I can take a punch like this?"
PHILADELPHIA, PA・6 HOURS AGO
6abc Action News

Did you see it? A rocket launch lit up the night sky around the Philadelphia region Saturday.
PHILADELPHIA, PA・2 DAYS AGO
6abc Action News

2 teens wounded after shooting in Hunting Park section of Philadelphia

Officers are focusing their investigation behind a row of businesses.
PHILADELPHIA, PA・1 DAY AGO
6abc Action News

As gun violence continues to surge out of control in Philadelphia, police tell Action News the city has recorded its 400th homicide.
PHILADELPHIA, PA・18 HOURS AGO
6abc Action News

According to police, the 23-year-old man was shot in the head.
PHILADELPHIA, PA・1 DAY AGO
6abc Action News

A $15,000 reward is being offered for information into a gun store burglary in Montgomery County, Pennsylvania.
MONTGOMERY COUNTY, PA・18 HOURS AGO