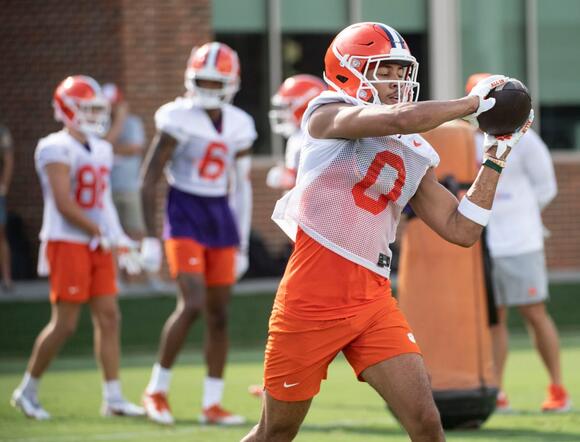 CLEMSON, S.C. — There is one freshman that has impressed Clemson linebacker Barrett Carter a lot, and he is not a defensive player.

CLEMSON, S.C. — There is one freshman that has impressed Clemson linebacker Barrett Carter a lot, and he is not a defensive player.

Instead, he is a wide receiver, and he happens to share the same jersey number as Carter.

What is his name?

“He is a really shifty guy,” Carter said following Day 4 of training camp Tuesday inside the Poe Indoor Practice Facility in Clemson. “He is really tough to guard. He challenges me every time I try to guard him.”

Williams came to Clemson as a highly regarded receiver from Dutch Fork High School near Columbia, S.C., where he was rated in the top 100 overall nationally by several outlets.

With Brannon Spector, E.J. Williams, Troy Stellato and Will Taylor playing the slot position, as well, Carter admits it makes his job in practice very hard.

“I have to be on my A-game every single play against a room like that,” Carter said. “They bring out the best in me.”

Williams’ emergence is not that surprising. He hauled in 137 passes during his high school career for 2,458 yards and 23 touchdowns. Last year, the 6-foot, 180-pound freshman caught 85 passes for 1,625 yards and 15 touchdowns, including 10 games in which he recorded at least 100 yards.

“You have to be on you’re A-game when guarding Antonio. I am telling you he has really, really shown me what he can do. I am very impressed with him.”

During the Tigers' 4-0 start, the rest of the country is now seeing what Dabo Swinney always saw in DJ Uiagalelei, as the quarterback's confidence is at an all-time high and he is playing some of the best football of his college career.
CLEMSON, SC・1 DAY AGO
AllClemson

NC State has covered the spread six of the last 10 times against Clemson, which is favored in Saturday's game at 7:30 p.m.
CLEMSON, SC・1 DAY AGO
AllClemson

CLEMSON, S.C. — Wes Goodwin is not going to put a grade on how his defensive line has played so far this year, but Clemson’s defensive coordinator believes there are some things they can do better. Heading into the 2022 season, the Tigers’ defensive front was being compared to the likes of the 2014 ...
CLEMSON, SC・2 HOURS AGO
AllClemson

WINSTON-SALEM, N.C.–The Tigers were without five defenders in Saturday's 51-45 win over Wake Forest, and a number of Tigers—including wide receiver Beaux Collins and running back Will Shipley were banged up in the game.
CLEMSON, SC・2 DAYS AGO
AllClemson

The Atlantic Coast Conference announced Monday that offensive tackle Jordan McFadden (Co-Offensive Lineman of the Week) and quarterback DJ Uiagalelei (Quarterback of the Week) have earned ACC Player of the Week honors for their performances in Clemson’s thrilling 51-45 double-overtime win against No. 21/16 Wake Forest on Saturday.
CLEMSON, SC・5 HOURS AGO
AllClemson

What We Learned from Clemson's Thrilling Win at Wake Forest

Coming out of Clemson's Week 4 win at Wake Forest, where the road through ACC Atlantic runs is clear, how good DJ Uiagalelei is playing is very clear and why the Tigers' defensive backs struggled is crystal clear.
CLEMSON, SC・1 DAY AGO
AllClemson

WINSTON-SALEM, N.C.—After a successful two-game homestand, the No. 5/5 Clemson Tigers will hit the road this week when the team travels to face the No. 21/16 Wake Forest Demon Deacons on Saturday, Sept. 24. Kickoff for the early contest at Truist Field is set for noon ET.
CLEMSON, SC・2 DAYS AGO

Everything Zac Taylor and Joe Burrow Had To Say After Beating The Jets
CINCINNATI, OH・2 HOURS AGO
AllClemson

The Clemson offense, led by quarterback DJ Uiagalelei, stepped up in a big way in the double overtime win over Wake Forest, and did so when the defense needed it most.
CLEMSON, SC・9 HOURS AGO

The Clemson Tigers get a couple of defenders back, in Bryan Bresee and Nate Wiggins, but are still without a few key pieces as they prepare for their contest against Wake Forest.
CLEMSON, SC・2 DAYS AGO
AllClemson

Trevor Lawrence Outduels One of AFC's Top Quarterbacks, Gets Jaguars to 2-1

The former Clemson star and Jacksonville Jaguars starting quarterback threw for 262 yards and tossed three touchdown passes with no interceptions in a 38-10 victory at the Los Angeles Chargers on Sunday.
JACKSONVILLE, FL・23 HOURS AGO
AllClemson

Former Clemson pitcher and Atlanta Braves starter is out for the rest of the regular season.
CLEMSON, SC・2 DAYS AGO