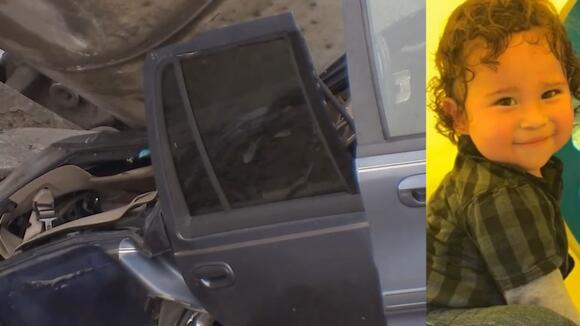 A family whose SUV was crushed when a concrete-mixer truck toppled off the East Beltway and landed on their vehicle is now seeking compensation in the wake of an apparent freak accident that killed a 22-month-old boy. His aunt, Esmerelda Resendiz, described little Nicolas Resendiz saying, "He was just a happy little boy. He wasn't shy like his sister. He would go to anybody. He would smile with you and laugh." The family is having a hard time accepting what happened was real. "It's still hard for us to process everything. Doing every day, daily things, with him not being here, or seeing one and not the other," Esmerelda Resendiz said. Eyewitness News obtained on Wednesday a copy of a lawsuit filed by Jennifer and Maria Resendiz, two of the SUV's occupants, against National Ready Mix LLC of Kingwood, which is the company that owns the truck involved in the Aug. 5 crash. The two women, who are mother and daughter, are not only seeking damages for current and future medical expenses, but they are seeking compensation for the wrongful death of Nicolas, the child who lost his life. "Plaintiff Jennifer Resendiz has forever lost her son. She is, therefore, entitled to be compensated for the past and future loss of the companionship, society, love, and affection resulting from the death of Nicolas, and for the mental anguish, grief and sorrow, which she has suffered since his death, and which she will in the future for the rest of her life," the filing reads. The women, whom the lawsuit states as "seriously injured" from the crash, are seeking over $1 million for Nicolas' death. A monetary amount was not disclosed for the women's injuries. Houston attorney Terry Bryant is listed as the family's representation. Eyewitness News has reached out to National Ready Mix and is awaiting comment. The filing doesn't identify the woman who was behind the wheel of the concrete-mixer truck. A Harris County Sheriff's Office news release in the immediate wake of the crash also states that charges have not been filed. ORIGINAL STORY: Child dies when concrete truck goes off E. Beltway overpass and lands on vehicle, sheriff says

A 22-month-old boy was crushed to death by a concrete mixer truck that landed on his family's SUV on Beltway 8 East at Woodforest.

According to deputies, the concrete mixer was heading southbound on the beltway when it began to rain in the area. The truck then lost control on the slick roadway, crashed through a barrier wall, and flew off the overpass and toward the frontage road below. In a moment of tragic timing, the heavy truck landed on an SUV going through the intersection. Lt. Simon Cheng, who is with HCSO's Vehicular Crimes Division, said a 54-year-old woman, who was later identified as Maria Resendiz, was in the driver's seat and a 22-year-old, identified as Jennifer Resendiz, was in the front passenger seat. Twenty-two-month-old twin siblings - a boy and a girl - were in the backseat. The women and the girl were able to escape, but witnesses said the boy was trapped. He died at the scene. The 36-year-old concrete truck driver remained at the scene. The truck driver also showed no signs of intoxication at the time and the vehicle's tires showed no signs of defect, Cheng said. The Resendiz family will bury Nicolas this weekend. They've set up a GoFundMe to help with funeral expenses. SEE MORE: Man killed when 18-wheeler's 2 loose tires hit 2 vehicles on I-45 near Louetta, sheriff says

A man is dead and his 11-year-old son was injured when an 18-wheeler lost two of its wheels mid-drive along Interstate 45, Sheriff Ed Gonzalez said.

HPD: Driver killed after allegedly speeding, causing car to flip over during crash in SW Houston

HOUSTON, Texas (KTRK) -- A driver accused of speeding is dead after their car flipped upside down during a crash in southwest Houston early Sunday, according to police. At about 1 a.m., Houston Police Department officers said a car was traveling at a high-rate speed when it hit another car trying to change lanes.
HOUSTON, TX・16 HOURS AGO
ABC13 Houston

Both deputies are in serious, but stable condition after being ejected onto the freeway Sunday morning, according to investigators.
HARRIS COUNTY, TX・15 HOURS AGO
ABC13 Houston

2-year-old killed after being struck by a speeding truck in SW Houston, police say

This was just one of the two incidents involving young children in the Houston area killed in a hit-and run.
HOUSTON, TX・19 HOURS AGO
ABC13 Houston

Investigators said they are checking video from businesses in the area that might help get a vehicle description.
SPRING, TX・17 HOURS AGO

According to records, the suspect told police that he consumed four 16-ounce beers while parked before he struck the minor while walking with his grandfather in a parking lot.
HARRIS COUNTY, TX・7 HOURS AGO
ABC13 Houston

Authorities said they believe the group of 4 juveniles and 1 adult might have also tried to steal a Chase Bank ATM 30 minutes before to the CVS incident.
HOUSTON, TX・15 HOURS AGO
ABC13 Houston

According to police, a witness told police officers the shooter arrived in another vehicle, got out, and fired two to three times before driving off.
HOUSTON, TX・1 DAY AGO
ABC13 Houston

A woman who told ABC13 the fire started in her apartment said she doesn't remember how she got out and is worried about her dog possibly still being in the building.
HOUSTON, TX・1 DAY AGO

'My bike is everything,' the single father of three told ABC13 on Friday. He says that the bike helps him relieve stress.
HARRIS COUNTY, TX・1 DAY AGO
ABC13 Houston

Woman trapped between rocks near Galveston's seawall for at least an hour, police say

GALVESTON, Texas (KTRK) -- A woman was hurt when she fell and was trapped between rocks near Galveston's seawall Sunday morning, according to police. Galveston police said they responded to a call of a woman trapped upside down in the rocks at the jetty near 10th Street and Seawall. The...
GALVESTON, TX・20 HOURS AGO
ABC13 Houston

Sam Mills said he wants to give back to the community that helped him in the most challenging time in his young life after being ejected from his vehicle in 2020 while driving home from work.
HARRIS COUNTY, TX・8 HOURS AGO
ABC13 Houston

The victim told police that the suspect opened his car door, pointed a handgun at him, and stole his wallet and necklace.
HOUSTON, TX・1 DAY AGO

Person of interest wanted after bystander killed in shootout between family in NE Houston, HPD says

Investigators said two men, believed to be family members, were involved in an argument before the shootout took place.
HOUSTON, TX・1 DAY AGO
ABC13 Houston

Surveillance video obtained by ABC13 shows the accused driver of the car stop several blocks away from the crash, get out to check the front of his car, then drive off.
HOUSTON, TX・2 DAYS AGO
ABC13 Houston

13 Unsolved: Who was waiting in the weeds to kill Worthing HS student Trellis Sykes?

Student athlete Trellis Sykes took a shortcut in 1994 that had a fatal ending. She was hit on the head, raped and murdered in a field of tall weeds.
HOUSTON, TX・2 DAYS AGO

One person was taken to the hospital in critical condition after multiple agencies responded to the scene.
CONROE, TX・1 DAY AGO
ABC13 Houston

Investigators said the alleged gunman won't give his side of the story without a lawyer present, so it's unclear why he opened fire on a homeless man next door.
HOUSTON, TX・2 DAYS AGO
ABC13 Houston

Police said the suspect came dangerously close to hurting more people. As detectives were walking through the complex, they found a bullet hole through a window.
HOUSTON, TX・3 DAYS AGO
ABC13 Houston

Brandon Rashon Freeman was driving eastbound on the service road of the Katy Freeway when he ran a red light and hit Amy Lane Shypailo's vehicle, according to authorities.
HOUSTON, TX・3 DAYS AGO