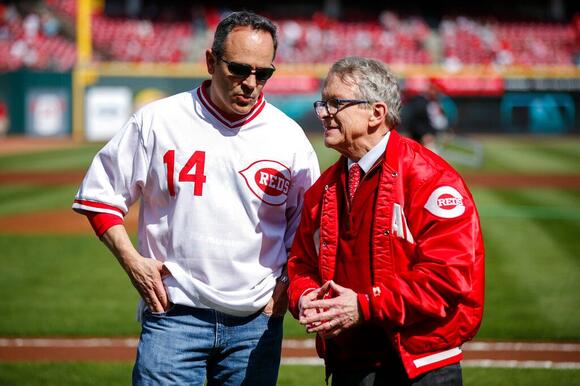 Ohio Gov. Mike DeWine , an avid baseball and Cincinnati Reds fan, is making the trip to Dyersville, Iowa, to check out Thursday's "Field of Dreams" game between the Reds and Chicago Cubs .

The game is based on the movie "Field of Dreams," which is about an Iowa farmer who plows over his corn to build a baseball field for Joe Jackson and other White Sox players who were banished for throwing the 1919 World Series .

After Thursday's game, there's an off day on Aug. 12 and the Cubs and Reds resume the series at Great American Ballpark on Aug. 13.

This is the second sporting event Mike DeWine is traveling to see a Cincinnati professional team play in 2022. In February, DeWine traveled to Los Angeles to attend Super Bowl 50 . The Bengals lost the game to the Rams.

DeWine, 75 is from Springfield. He is also the owner, along with his family of the Asheville Tourists, a minor league affiliate of the Houston Astros.

Nothing but respect: Cincinnati football players offer shoutouts to opponents who impress

The fall season of high school sports is upon us. Who better to know what kind of talent Greater Cincinnati offers than the players themselves?. The Cincinnati Enquirer sought opinions from players across multiple conferences on opponents who have been impressive on the field this season. This week, area football players gave their input.
CINCINNATI, OH・2 DAYS AGO
The Blade

Briggs: No apologies, but here's why my AP ballot looks so off the wall

Let’s play the icebreaker, “Two truths and a lie.” I’ll go first! 1. I’m one of the 63 voters in the Associated Press Top 25 college football poll. 2. I don’t like your favorite team — never have and never will.
COLLEGE SPORTS・13 MINUTES AGO
San Diego Union-Tribune

The Philadelphia Phillies have reduced their magic number to one for clinching their first postseason berth in 11 years
PHILADELPHIA, PA・28 MINUTES AGO
WFAN Sports Radio

Marinaccio left Sunday’s game in the eighth inning due to the issue, which has lingered off and on all year. He had tests earlier this season that came back fine, and he is hopeful that will again be the case Monday.
BRONX, NY・27 MINUTES AGO