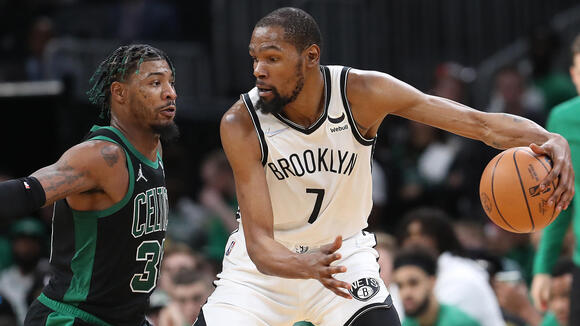 BOSTON -- We've known that Kevin Durant wants out of Brooklyn since the end of June, and he had Miami and Phoenix on his preferred list of destinations shortly after he made his initial request. That list is now expanding after Durant doubled-down on his demand over the weekend, with the Boston Celtics right in the thick of things.

Durant considers Boston a "desired landing spot," according to Ian Begley of SNY . He'd also like to play alongside Celtics guard Marcus Smart, according to Begley.

Like every team, the Celtics have inquired a Durant trade with the Nets, but they haven't liked the lavish asking price. The Nets reportedly asked for both Jayson Tatum and Jaylen Brown early in the process, which is a laughable request. They reportedly countered by asking for Brown, Smart and a slew of draft picks, with Boston swapping out Derrick White for Smart in their counter.

Neither team likes what the other is asking for, and talks are reportedly dormant at the moment. But there was another tidbit in Begley's post that could maybe get the Celtics interested in upping their ante for Durant.

Durant also considers Philadelphia as a "welcome landing spot," and there are high-ranking members of the 76ers who want to engage in the Durant sweepstakes, according to Begley. That would put Durant alongside Joel Embiid and James Harden, give Philly some decent fire power in the battle for the Eastern Conference.

Reading between the lines, Durant is letting it be known that he wants to play in Boston. Throwing the 76ers on his list could simply be a way of getting the Celtics to give in and make a deal.

However, Boston doesn't seem too eager to overpay for the 34-year-old star. The Celtics are going to be considered a contender whether they trade for Durant or not, so they really don't need to make a deal for the 12-time All-Star and two-time Finals MVP. Boston is also fresh off a trip to the Finals with the Tatum/Brown/Smart core that included a first-round sweep of the Nets where Durant looked rather human.

But if an Eastern Conference rival roughly 300 miles away jumps into the fray? Maybe the Celtics will budge a little bit.

BOSTON -- We need to stop hiding behind the "I'm not a doctor" line. It's cowardly.Most of us aren't doctors, no. But we're observant human beings. And we've seen enough head injuries in contact sports to know one when we see one. Last Sunday in Miami, we saw one. We saw Tua Tagovailoa's head slam hard against the turf. We saw him almost crumple to the ground a few seconds later. We were told it was an ankle and back injury for the quarterback.We're not doctors. But we're also not stupid.After smashing his head on the ground and feeling ......
BOSTON, MA・1 DAY AGO
CBS Boston

TORONTO (AP) - Vladimir Guerrero Jr. and George Springer homered, Alek Manoah pitched six innings and the playoff-bound Toronto Blue Jays beat the Boston Red Sox 8-0 on Friday night.Raimel Tapia also connected for the Blue Jays, who clinched an AL wild-card berth Thursday when the Red Sox beat the Baltimore Orioles. Toronto had a clubhouse celebration after the game Friday.Toronto (88-69) leads the AL wild-card race, ahead of Seattle and Tampa Bay. The Blue Jays went 18-10 in September. They're 14-3 against the Red Sox this season, outsourcing Boston by 56 runs.Guerrero hit a two-run shot off Canadian-born right-hander...
BOSTON, MA・18 HOURS AGO