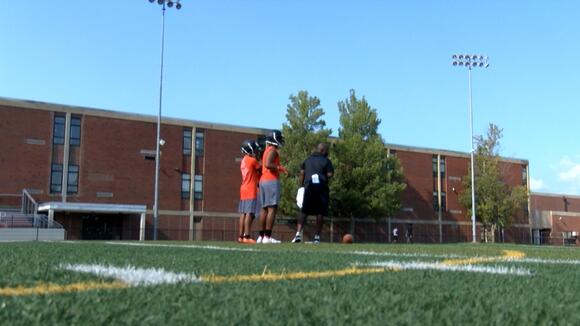 URBANA (WCIA) — Urbana football won’t field a varsity team this fall. The school district released a statement Wednesday afternoon announcing it will only play a JV schedule in 2022, electing to cancel all its varsity games.

“After evaluating the roster numbers during this week’s practices, the decision was made that there are not enough players to safely support a varsity season,” the statement read. “The high school will turn its focus to a JV only season. This decision was made with safety in mind, while also providing an opportunity for our student athletes to continue to develop their skills.”

Players and families were notified of the decision on Tuesday, with the season scheduled to begin in just 16 days. Only about 30 players were at practice on Wednesday for the third workout of the season. This is the third straight season Urbana has elected to cancel its varsity season. The Tigers did not field a team during the 2021 COVID-19 shortened spring season, then canceled its varsity season last fall after one game, playing a JV only schedule due to low numbers.

This follows a coaching change less than a week before the season started. Edmund Jones resigned after just one season, largely spent coaching the JV Tigers. Former Danville standout Curtis Blanden Sr. was hired on an interim basis, where he will now spend this fall working with the program playing another JV schedule.

The decision from Urbana leaves Centennial (Week 1), Central (Week 5 in a game that is being talked about moving to McKinley Field) and Danville (Week 9) without opponents right now. They can take either find a new team to play or take a forfeit win.

Such a big town with should be lots of kids to support a team. Guess to busy being on the couch or running the streets. A teaching experience lost of being better ppl.

Seriously, kids are too busy on their phones anymore to want to do anything. And when you push the gay / transgender narrative, boys no longer want to be boys. Feel bad for those that want to play.

this is ridiculous, I live in a small town about 45 miles away and we would definitely take the Varsity team to add to ours. that's not fair to the kids who have played since they were little.

URBANA, Ill., (WCIA) — High schools across the state are preparing for homecoming celebrations this weekend. Urbana High School kicked off its festivities Friday afternoon for the first time in two years.  This year’s homecoming looks a little different than years past, their school doesn’t have a varsity football team this year and there won’t […]
URBANA, IL・21 HOURS AGO
WCIA

CHAMPAIGN (WCIA) — Illinois volleyball is staying home for another Big Ten matchup. The Illini will face Purdue (No. 5) tomorrow at 7:00 in Champaign. Illinois is 2-0 in Big Ten play, coming off two wins over Maryland and Northwestern. Purdue is currently 11-1 on the season. Then Illinois will travel up to Madison to […]
CHAMPAIGN, IL・1 DAY AGO
WCIA

CHAMPAIGN, Ill., (WCIA) — People in Illinois are feeling the impact of Hurricane Ian, and one florist in Champaign is prepared to pivot.  Andrea Hunt-Shelton, C-U Flower House’s owner, said in warmer months, many of their flowers come from the area, but when cooler months roll around, a lot come from Ecuador and Miami. They […]
CHAMPAIGN, IL・1 DAY AGO

CHAMPAIGN-URBANA, Ill. (WCIA) — On Saturday, the City of Champaign-Urbana will participate in the Pride Festival Fair. Public works helped to build the City’s float, organizers said. The City will have an informational table during the Pride Fest Fair. If you want to walk in the parade, arrive by 10:15 a.m. The parade starts in […]
URBANA, IL・1 DAY AGO
WCIA

Hunting for painted rocks coming to a close

CHAMPAIGN, Ill. (WCIA) — For a second year, the Champaign Park District put on a scavenger hunt involving painted rocks called #ParksRock, ending on Oct. 3. The community painted rocks and hid them throughout parks in Champaign for children to find. This year they expanded their program to include four scavenger hunts, with 30 rocks […]
CHAMPAIGN, IL・2 DAYS AGO
WCIA

Divine Consign back for fall sale

Divine Consign is back once again, ready for shoppers looking for great deals on gently used (some new with tags!) items!
CHAMPAIGN, IL・1 DAY AGO
WCIA

FAIRBURY (WCIA) — Andrew Quain challenged his Prairie Central team this year to go after the big takeaway but even he didn’t foresee the Hawks doing this well. “I try to preach aggressiveness and kind of that gambling on defense,” the Prairie Central coach said. “It’s a crazy stat to think our defense has more […]
FAIRBURY, IL・3 DAYS AGO

Fall festival at the oldest farmstead in Coles County

CHARLESTON, Ill. (WCIA) — On Saturday, the Charleston Five Mile House is hosting the Blacksmith Hammer-In, which includes blacksmithing demonstrations. From 10 a.m. to 4 p.m., there will be an archaeology display. There is a bonfire and barn dance from 4 to 6 p.m., open to anyone who likes to dance, said organizers.Then, on Sunday, […]
COLES COUNTY, IL・5 HOURS AGO
WCIA

Stuck in hurricane Ian; U of I grad and Decatur woman

CENTRAL ILLINOIS, Ill. (WCIA)– A recent U of I graduate and a woman from Decatur are both stuck in Hurricane Ian.   “We traveled back to Brooksville with my sister because it’s my little girl’s 7th birthday,” said Sharon Koontz.  Koontz went to Florida for a birthday trip but got stuck in the storm.   […]
DECATUR, IL・2 DAYS AGO
WCIA

CHAMPAIGN, Ill. (WCIA)- A project six years in the making is close to being finished. It’s the Central North Fields project in Champaign.  It was part of the district’s referendum. Crews have been building a field for soccer and the marching band and one for softball.  It’s where the old YMCA sat, not far from […]
CHAMPAIGN, IL・3 DAYS AGO
WCIA

‘Keep on rollin’ at Skatelandsavoy

SAVOY, Ill. (WCIA) — Remember the last time you lace up a pair of skates, step onto the rink and start rolling? A Savoy roller skating center is inviting rollers of all ages to celebrate National Roller Skating Month this October. Bob and Jeanne Housholder have owned Skatelandsavoy for 20 years and said they see […]
SAVOY, IL・22 HOURS AGO

New community center to bring gyms and technology to Champaign

CHAMPAIGN, Ill., (WCIA) — When you picture a playground, you probably remember monkey bars and slides at recess.  The Champaign Park District is changing that with an electronic playground and video game spaces powered by movement.  Those are just a few parts of the new Martens Center on Market Street, just south of I-74.  The […]
CHAMPAIGN, IL・2 DAYS AGO
WCIA

DECATUR, Ill. (WCIA) — For the 120-year anniversary of ADM, Mayor Julie Moore Wolfe formally declared Sept. 30 “ADM Day” in Decatur. ADM, formally known as Archer-Daniels-Midland Company, has been a member of Decatur since 1969. Decatur is home to its North American Headquarters, and Decatur has the most prominent operation location. They employ more […]
DECATUR, IL・1 DAY AGO
WCIA

Illini keep eye on Hurricane Ian, loved ones in Florida, while preparing for Wisconsin

CHAMPAIGN (WCIA) — Preparation continues for this weekend’s game at Wisconsin for the Illinois football team but with Hurricane Ian causing destruction in Southwest Florida Wednesday afternoon, attention is also on family and friends back home for several Illini. Nearly 1/6th of the team calls Florida home, including senior safety Quan Martin from Lehigh Acres, […]
CHAMPAIGN, IL・3 DAYS AGO
WCIA

CHAMPAIGN COUNTY, Ill. (WCIA) — The end of September means Champaign County is only one month away from Halloween. The County Board is already planning for the holiday by announcing this year’s official trick-or-treat hours on Friday. The tradition will take place from 6 to 8 p.m. on Monday, Oct. 31. These hours follow a […]
CHAMPAIGN COUNTY, IL・1 DAY AGO

Survivor Resource Center to host Dancing for the Stars

DANVILLE, Ill. (WCIA) — If you’ve never seen your mayor and chiefs dancing, there is an opportunity to see them on stage Saturday night. Survivor Resource Center (SRC) will host the first Dancing for the Stars at the Fischer Theatre on October 1. The event will begin at 7 p.m. Local celebrities will partner up […]
DANVILLE, IL・23 HOURS AGO
WCIA

CERRO GORDO, Ill. (WCIA) — A woman in Cerro Gordo decided to have a pollinator garden to help bees and bought a couple of milkweed plants, which turned into her raising monarch butterflies. On Friday, Heather Tirpak released a few of the monarchs. They are migrating to Mexico for the winter, and she said they […]
CERRO GORDO, IL・6 HOURS AGO
WCIA

One dead after bicycle crash on Illinois college campus Monday

NORMAL, Ill. (WMBD) — A pedestrian struck by a bicycle on Illinois State University’s campus Monday evening has died as a result of his injuries, authorities announced Friday. At approximately 5:30 p.m. Monday, ISU Police and Normal Fire Department reported to a sidewalk area near South University Street for a bicycle-pedestrian crash. The pedestrian suffered […]
NORMAL, IL・1 DAY AGO