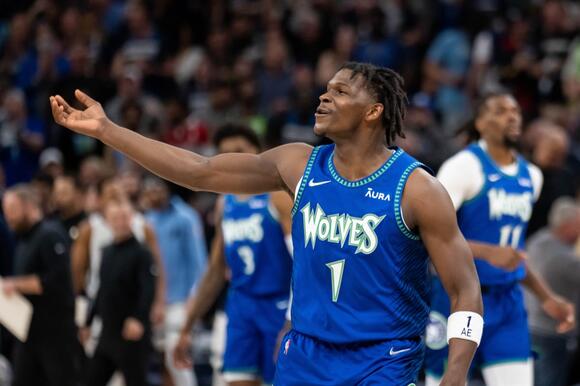 Rapper Lil Baby commented on Anthony Edwards' recent Instagram post. Edwards was the first overall pick (out of the University of Georgia) in the 2020 NBA Draft by the Minnesota Timberwolves.

Recently, Anthony Edwards made a post to Instagram with a video of the new Sprite commercial that he is in.

There were thousands of likes and hundreds of comments on the post.

One of the people who commented was rapper Lil Baby.

Edwards was the first overall pick (out of the University of Georgia in the 2020 NBA Draft by the Minnesota Timberwolves.

The 21-year-old is one of the rising stars in all of the NBA, and has the potential to be a true superstar one day.

This past season, was second year in the NBA, and he already averaged 21.3 points per contest.

He also grabbed 4.8 rebounds and dished out 3.8 assists per contest.

The Timberwolves went 46-36, and finished as the seventh seed in the Western Conference.

They beat the Los Angeles Clippers in the play-in tournament to secure their spot in the NBA playoffs.

This was the first time the Timberwolves made the playoffs since the 2018 season when they had Jimmy Butler.

They lost to Ja Morant and the Memphis Grizzlies six games, but the series was close.

There is a good case to be made that the Timberwolves could have won the series.

Next season, they could end up being on of the few true contenders in the Western Conference.

They have a loaded roster with Edwards, D'Angelo Russell and Karl-Anthony Towns.

In addition, they traded for All-Star center Rudy Gobert from the Utah Jazz.

On Monday, Zion Williamson met with reporters at New Orleans Pelicans media day. Williamson missed the entire 2021-22 NBA season. He was the first overall pick in the 2019 NBA Draft after an incredible season for the Duke Men's Basketball Team.
NEW ORLEANS, LA・2 DAYS AGO
Black Enterprise

ESPN’s Malika Andrews stirred up more controversy for the NBA’s Boston Celtics when she brought up the history of the team’s interim head coach from more than 13 years ago. During an on-air NBA Today broadcast last week, the sports world was upended when it was reported...
BOSTON, MA・2 DAYS AGO
FastBreak on FanNation

According to ESPN's Dave McMenamin, Patrick Beverley said that his "best friend" on the Los Angeles Lakers has been Russell Westbrook.
LOS ANGELES, CA・2 DAYS AGO
FastBreak on FanNation

According to Shams Charania of The Athletic and Stadium, LiAngelo Ball is signing with the Charlotte Hornets. He is the older brother of LaMelo Ball (Hornets) and the younger brother of Lonzo Ball (Chicago Bulls).
NBA・2 DAYS AGO

The Los Angeles Lakers are planning on signing former Boston Celtics forward Matt Ryan to a non-guaranteed contract ahead of the start of training camp.
LOS ANGELES, CA・2 DAYS AGO
FastBreak on FanNation

On Monday, Klay Thompson met with the media and had a great quote about his teammate Draymond Green. The Golden State Warriors have won four titles in the last eight seasons.
SAN FRANCISCO, CA・2 DAYS AGO
FastBreak on FanNation

The Los Angeles Lakers have signed Dwayne Bacon to a training camp deal. Bacon has played for the Charlotte Hornets and Orlando Magic.
LOS ANGELES, CA・2 DAYS AGO

On Monday, the Phoenix Suns released their 2022-23 "Statement" jerseys.
PHOENIX, AZ・2 DAYS AGO
FastBreak on FanNation

Shams Charania was on "The Rally" and said that the Miami Heat, Dallas Mavericks, Memphis Grizzlies and Boston Celtics are possible destinations for Jae Crowder. He has spent the last two seasons on the Phoenix Suns.
NBA・2 DAYS AGO
FastBreak on FanNation

On Sept. 27, most teams around the NBA are having their first day of training camp, and Carmelo Anthony still remains a free agent. He played last season for the Los Angles Lakers, but the best years of his career came with the New York Knicks and Denver Nuggets.
NBA・1 DAY AGO

According to Andrew Marchand of The New York Post, Jamal Crawford will join TNT for the 2022-23 NBA season. He is now retired but has played for nine NBA teams (most recently the Phoenix Suns and Brooklyn Nets).
NBA・7 HOURS AGO
FastBreak on FanNation

According to Joe Vardon of The Athletic, the Cleveland Cavaliers are interested in trading for Phoenix Suns forward Jae Crowder.
PHOENIX, AZ・10 HOURS AGO
FastBreak on FanNation

On Tuesday, the Washington Wizards waived Davion Mintz. The 24-year-old played the final two seasons of his college career with the Kentucky Wildcats men's basketball team.
WASHINGTON, DC・23 HOURS AGO

On Monday, Ben Simmons spoke to reporters at Brooklyn Nets media day. He was traded from the Philadelphia 76ers to the Nets last season.
BROOKLYN, NY・2 DAYS AGO
FastBreak on FanNation

The Denver Nuggets Have Waived A Player

The Brooklyn Nets have re-signed RaiQuan Gray, who they recently waived. He played his college basketball for the Florida State Men's Basketball Team.
BROOKLYN, NY・1 DAY AGO