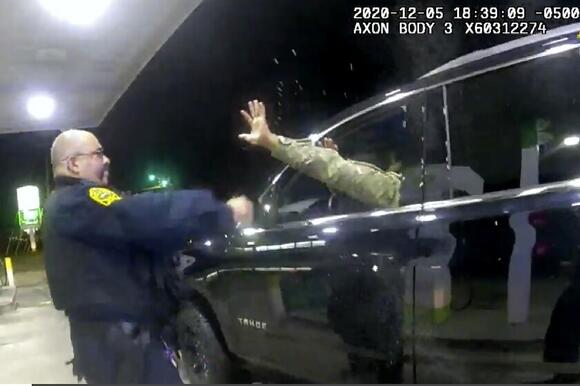 A U.S. Army lieutenant who was pepper-sprayed, struck and handcuffed during a traffic stop in Virginia can present his claims of false imprisonment and assault and battery to a jury, a federal judge has ruled.

Caron Nazario, who is Black and Latino, claims that the officers violated his constitutional protections against excessive force and unreasonable seizure. Further, he claims a violation of his right to free speech, alleging that the officers threatened him with arrest if he complained about their behavior.

U.S. District Judge Roderick C. Young also ruled that the officer who initially pulled Nazario over is liable for illegally searching for a gun in the soldier's SUV in violation of the U.S. Constitution and Virginia law, leaving the question of damages on that point up to a jury. Nazario had a concealed carry permit.

The December 2020 traffic stop of the uniformed military officer in the small town of Windsor drew national attention and outrage after Nazario sued in April 2021, citing police body camera images and his cellphone video of the encounter. He was never charged with a crime.

Nazario had been driving home in the dark from his duty station when Officer Daniel Crocker radioed that he was attempting to stop a vehicle with no rear license plate and tinted windows, the lawsuit says. Body camera video later showed that a temporary tag was taped to the inside of the rear window.

“It appeared to Lt. Nazario that there was no good location in the immediate vicinity to stop safely. So, for the benefit of the officer’s safety and his own, Lt. Nazario continued slowly down US 460," the lawsuit says. Nazario drove below the posted speed limit for less than a mile until he reached the well-lit parking lot of a BP gas station, it says.

Crocker said the driver was “eluding police” and he considered it a “high-risk traffic stop,” according to a report cited in the lawsuit. Another officer, Joe Gutierrez, was driving by and joined him.

The lawsuit says both officers escalated the situation by immediately pointing their guns at Nazario and trying to pull him out of the vehicle while he kept his hands in the air. Gutierrez pepper-sprayed Nazario multiple times as the officers yelled for him to get out.

At one point, Nazario said he was afraid to get out, to which Gutierrez replied: “You should be.”

When Nazario did get out and ask for a supervisor, Gutierrez responded with “knee-strikes” to his legs, knocking him to the ground, where the two officers struck him multiple times and then handcuffed and interrogated him, the lawsuit says.

Gutierrez was later fired for failing to follow department policy during the stop. A special prosecutor concluded late last month that Gutierrez should not be criminally charged under Virginia law , but should be investigated by the U.S. Justice Department for potential civil rights violations.

The federal judge ruled Tuesday that the officers had probable cause to pull Nazario over for an improperly displayed license plate and to charge him with eluding police as well as obstruction of justice and failure to obey when he refused to exit the vehicle.

But Young said the allegations of false imprisonment, assault and battery that Nazario made under state law can move forward because Virginia law “only provides local officials immunity from suits alleging negligence.”

Explaining his summary judgment on Crocker's search for the gun, Young wrote that “the firearm was not relevant evidence for the crimes of eluding or obstruction of justice." However, he said Nazario’s claims that Gutierrez knew about the search and failed to intervene could proceed to trial. Gutierrez has argued that he knew nothing about the search.

Jessica Ann Swauger, an attorney listed for Gutierrez, did not immediately respond to an email seeking comment.

Jonathan Arthur, one of the attorneys representing Nazario, said the judge's ruling is a victory even though three of the federal claims were tossed.

Anne C. Lahren, an attorney for Crocker, said the remaining questions are “classic” issues for a jury, rarely decided at this stage in a civil suit. She also noted that the judge found the stop itself and the officers' ensuing commands to be lawful.

“Lt. Nazario’s own actions gave rise to the unfortunate, but lawful, escalation of force,” Lahren wrote. “Had Lt. Nazario simply followed the lawful commands of the officers from the outset of the traffic stop, none of this would have been necessary.”

There are good cops and bad cops. I didn't witness this but believe I did see a video of at least part of the confrontation and if this story is to be believed these were two bad cops with bad attitudes. Glad one was fired

...and to think this soldier singed up to protect these badge wearing thugs. I guess this is what Muhummad Ali meant.

The Department of Justice (DOJ) announced Thursday that Shelley Joseph, the Massachusetts state court judge who allegedly helped a criminal defendant and undocumented immigrant evade Immigration and Customs Enforcement (ICE) in 2019, will no longer be criminally prosecuted for her actions. Wesley MacGregor, the former court officer who allegedly assisted the same defendant, has also entered into an agreement with the DOJ that will likely mean the end of the criminal case against him as well.
MASSACHUSETTS STATE・3 DAYS AGO
NBC News

The city of Forth Worth, Texas, settled a federal civil rights lawsuit filed by a Black woman after she and her daughter were wrestled to the ground in a violent 2016 arrest. City officials agreed to pay $150,000 to Jacqueline Craig. The settlement will go before City Council in October for approval.
FORT WORTH, TX・1 DAY AGO
Los Angeles Times

NEW YORK (AP) — The chief of the U.S. Capitol Police during the Jan. 6 siege has a book deal. Steven A. Sund’s “Courage Under Fire: Under Siege and Outnumbered 58 to 1 on January 6” will come out Jan. 3, just shy of the two-year anniversary of the riot by supporters of President Donald Trump.
U.S. POLITICS・37 MINUTES AGO

Russian authorities say a gunman has killed 13 people and wounded 23 others in a school in central Russia.
PUBLIC SAFETY・3 HOURS AGO
Los Angeles Times