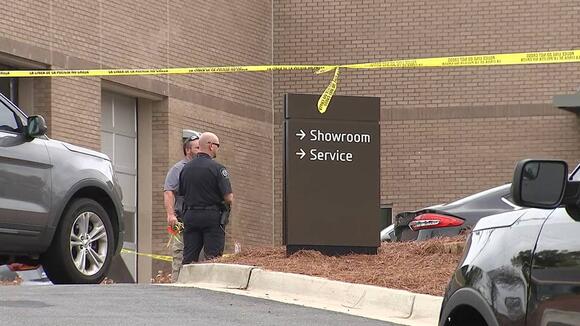 CANTON, GA. — Canton police are investigating after a man was shot outside of a Canton car dealership.

The shooting happened Wednesday at the Shottenkirk Hyundai dealership on Liberty Boulevard just after 1 p.m.

Officers responded to a call about a person shot in a car.

Channel 2′s Berndt Petersen was at the scene, where he saw crime scene tape strung up outside the dealership’s showroom. Police also swarmed a spot in the middle of Liberty Boulevard about a quarter mile down the road where they said the driver drove to and stopped.

That’s where they said they found a man who had a gunshot wound to the leg and a woman who was unharmed. Police identified the victim as 24-year-old Uriah Tyrek James.

Officers performed life-saving techniques on James, applying a tourniquet to his leg before he was taken to the hospital. His current condition has not been released.

The shooter, identified as Kevon Phillip Duffas, 30, from Covington, was taken to the Cherokee County Adult Detention Center and charged with two counts of aggravated assault.

Police said that neither James or Duffas was a customer or employee at the car dealership. It’s unclear if there was any prior relationship between the three people involved.

Officials say there is no active threat to the public.

FULTON COUNTY, Ga. — A local police lieutenant is out of a job after several officers accused her of causing a hostile work environment. The officers said she was stealing money and drinking on the job, among other claims. Now, the city of South Fulton has asked an outside police agency to investigate the matter.
SMYRNA, GA・21 HOURS AGO
WSB Channel 2 Atlanta

ATLANTA — A man who police say assaulted a woman inside a bathroom at the Fulton County courthouse has been arrested. [DOWNLOAD: Free WSB-TV News app for alerts as news breaks]. Lester Walker was taken into custody Monday evening after a senior investigator with the Fulton County District Attorney’s...
FULTON COUNTY, GA・3 HOURS AGO

GWINNETT COUNTY, Ga. — The parents of a 10-year-old killed in a Gwinnett County house fire now face felony murder and other charges. William and Carina McCue vanished for months after the fire until police found them on the Appalachian Trail in June. [DOWNLOAD: Free WSB-TV News app for...
GWINNETT COUNTY, GA・7 HOURS AGO
WSB Channel 2 Atlanta

Man convicted of terrorizing Asian families in Gwinnett, DeKalb, breaking into their homes

GWINNETT COUNTY, Ga. — A Gwinnett County jury has convicted a man of breaking into the homes of several Asian restaurant owners and employees between March and June 2019. Prosecutors say Emmanuel Rakestraw and at least three others followed their victims from Asian restaurants to their homes in Gwinnett and DeKalb counties before either attacking them or breaking into their homes later.
GWINNETT COUNTY, GA・1 DAY AGO
WSB Channel 2 Atlanta

DEKALB COUNTY, Ga. — DeKalb County police said a woman is dead at Decatur apartment complex. Police said they were called out to the complex for reports of a person shot. Investigators said that they found the body of woman who had died from a gunshot wound. Channel 2...
DEKALB COUNTY, GA・1 DAY AGO
WSB Channel 2 Atlanta

ATLANTA — Atlanta police are investigating a shooting that occurred in Bankhead where a man and woman were shot, Capt. Christian Hunt said. According to Hunt, the woman told police two men were shooting at one another and she ran. [DOWNLOAD: Free WSB-TV News app for alerts as news...
ATLANTA, GA・17 HOURS AGO

DEKALB COUNTY, Ga. — DeKalb County police are investigating after two people were shot and two people were stabbed during a fight at an apartment complex in Lithonia. [DOWNLOAD: Free WSB-TV News app for alerts as news breaks]. Police responded to the 5900 block of Sutcliffe Square, where they...
DEKALB COUNTY, GA・1 DAY AGO
WSB Channel 2 Atlanta

Man arrested after police said he tried to carjack 2 people

FORSYTH, Ga. — The Monroe County Sheriff’s Office is searching for an inmate who they say stole a city work truck and escaped from a city work detail. [DOWNLOAD: Free WSB-TV News app for alerts as news breaks]. A BOLO (be on the lookout) has been issued for...
FORSYTH, GA・1 DAY AGO
WSB Channel 2 Atlanta

Clayton man was trying to rescue trapped family when he was hit and killed, loved ones say

Cobb teen goes to jail after going over 130 mph in a 55 mph zone, police say

GWINNETT COUNTY, Ga. — A Snellville family of seven is thankful that their neighbor was alert after their home caught fire early Monday morning. Gwinnett County firefighters were called to a home on Hidden Forest Drive just before 4 a.m. where they found the house fully engulfed in flames.
SNELLVILLE, GA・7 HOURS AGO

GWINNETT COUNTY, Ga. — Gwinnett police are investigating a stabbing that left a 4-year-old child seriously injured. [DOWNLOAD: Free WSB-TV News app for alerts as news breaks]. At about 8 a.m. Sunday, officers were called to Lewis Ridge Circle in Lawrenceville about a child being injured. According to officials,...
GWINNETT COUNTY, GA・2 DAYS AGO
WSB Channel 2 Atlanta

LITHONIA — DeKalb County police have released a photo of a person wanted for questioning in the murder of a 13-year-old boy found dead in Lithonia last week. [DOWNLOAD: Free WSB-TV News app for alerts as news breaks]. DeKalb Police responded to reports of a person found dead near...
LITHONIA, GA・1 DAY AGO
WSB Channel 2 Atlanta