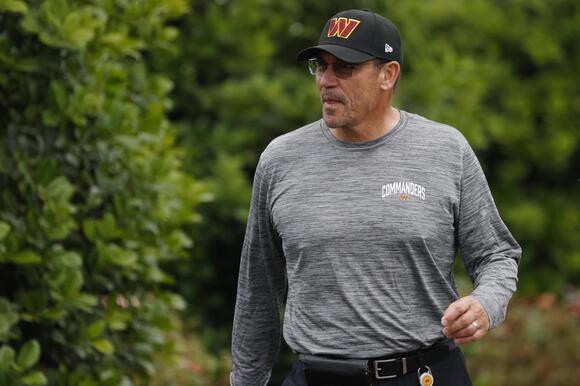 Last weekend, Sam Mills was finally enshrined into the Pro Football Hall of Fame. It was something that was long overdue but nonetheless, his wife Melanie, and the rest of the Mills family was able to take in the celebration in Canton, Ohio, to honor his legacy.

"Very difficult," Rivera said on making the decision to fire Mills. "I've known Sam a long time, and [he's] a very good football coach. And I really appreciate everything that he's done. He helped us win the division the first year, and things got tough last year. There were some things I felt I wanted to change."

What doesn't make much sense is the reasoning for his firing.

"Just a difference in philosophy for the most part. I felt like it was a change I needed to make."

Considering Mills has been an assistant under Rivera since 2011, dating back to their time with the Carolina Panthers, I'm not sure if I buy the whole "difference in philosophy" thing.

The Panthers will be counting on the undrafted rookie moving forward.
CHARLOTTE, NC・2 DAYS AGO
AllPanthers

Can the Panthers cover the spread?
CHARLOTTE, NC・1 HOUR AGO
AllPanthers

How to Watch, Listen, & Receive LIVE Updates of Panthers vs Saints

Getting you set for this week's Carolina Panthers game.
CHARLOTTE, NC・2 DAYS AGO

It's a coin flip for Week 3.
NEW ORLEANS, LA・2 DAYS AGO
AllPanthers

The Explanation Behind Terrace Marshall Jr. Being Inactive vs Saints

Episode 96 has been released.
CHARLOTTE, NC・2 HOURS AGO

Monday Morning Thoughts: Panthers Still Have a lot to Fix

Breaking down the Panthers' win over the Saints.
CHARLOTTE, NC・1 DAY AGO
AllPanthers

Players to Watch: Saints at Panthers

Some of the most important players to keep an eye on for this weekend's game.
CHARLOTTE, NC・2 DAYS AGO
AllPanthers

Everything Matt Rhule Said Following the Win Over New Orleans

Score Predictions for Panthers vs Saints

The All Panthers staff makes their picks for Week 3.
CHARLOTTE, NC・2 DAYS AGO

Carolina picks up win No. 1 on the season.
CHARLOTTE, NC・1 DAY AGO
AllPanthers

Individual + Team Stats from the Panthers' Win Over New Orleans

The final numbers from today's game.
CHARLOTTE, NC・1 DAY AGO